Today’s Kindle deals include a pretty good selection of titles. We used to be able to count on Crossway for some new deals each Monday; I wonder if and when they will return…

(Yesterday on the blog: A Prayer for a Sunday Evening)

The Courage To Say “Help”

This is so true. “It is hard to ask for help. Hard to admit our brokenness. Hard to accept, in our individualistic society, that we can’t manage alone. Hard to open ourselves up to potential rejection or ridicule. And hard to accept the help even when it is gladly, openly, freely given.”

“Their work is small, slow, seemingly unstrategic. They’ve seen few conversions. During my visit, we spent many hours with a Muslim man dear to my friend, and it became clear that he was still far from the gospel. Later, my friend expressed his discouragement to me. Viewed in terms of results, the ministry of this remarkable family seems like a waste.”

What Was the Star and How Did the Wise Men Know To Follow It? (Sponsored)

“What was the star and how did the wise men know to follow it? These are questions people are curious to have answered, especially this time of year. During the Christmas season, many who are hostile to anything Biblical, won’t object to hearing about the ‘Christmas Story’. Often, they welcome it with curiosity! When would be a better opportunity for some undercover evangelizing than when gathering with our friends and family during Christmas week?”

Evangelical Elites Are Out of Touch

Carl Trueman comments on Mark Galli’s editorial in Christianity Today in which he argued that Christians must dump Donald Trump. “When someone calls for Trump to be thrown out of office by impeachment or the ballot box, it is reasonable to ask what the available alternatives are. As Mother Theresa is unavailable for the White House, we are really looking at Biden, Warren, or Sanders. I can’t speak to the personal moral qualities of these people, but would voting for them or their policies give Christians any more credibility? Given the role of abortion and LGBTQ rights in their respective campaigns, this is surely something any Christian has to address.”

Opinion: The fading of a democracy: India’s fight to save its constitution

Writing from India, Christopher David tells how the situation there is worsening for Christians (and members of other minority religions). “Democracies don’t vanish overnight. They slowly fade into oblivion. This is the harsh reality that faces the world’s largest democracy this winter. Ever since India’s Parliament on December 11th passed the controversial Citizenship Amendment Act (CAA), the nation has been gripped by protests across the land with tens of thousands taking to the streets.”

It’s the right time of year to listen to Handel’s Messiah. But, of course, it’s not just his. “Handel’s magnum opus is one of the supreme wonders of human genius, especially if you keep in mind that the genius on display isn’t only Handel’s. We’re so used to calling the work ‘Handel’s Messiah‘ that we fail to notice that he only wrote the music. And as good as the music is, what’s being said, or in this case, sung, is every bit as inspired and inspiring.”

British Legal Reasoning Takes Us Through the Looking Glass

This kind of reasoning is becoming more and more common. “Yet another decision was handed down this week by a British judge that sounds more like it was written by Humpty Dumpty in Lewis Carroll’s Through the Looking Glass than a member of the Western legal tradition. The judge’s decision is as radical as they come, for it effectively marginalizes anyone who refuses to conform to the radical group-think of transgenderism.”

Churches should be involved in mercy ministry, but should they trumpet their merciful deeds?

The Incarnation is an especially joyful and important doctrine for Christians because, not only did God align with man, but through this alignment Jesus gained a human body that could in turn be sacrificed to endure God’s wrath. This was the only way that man could be saved. 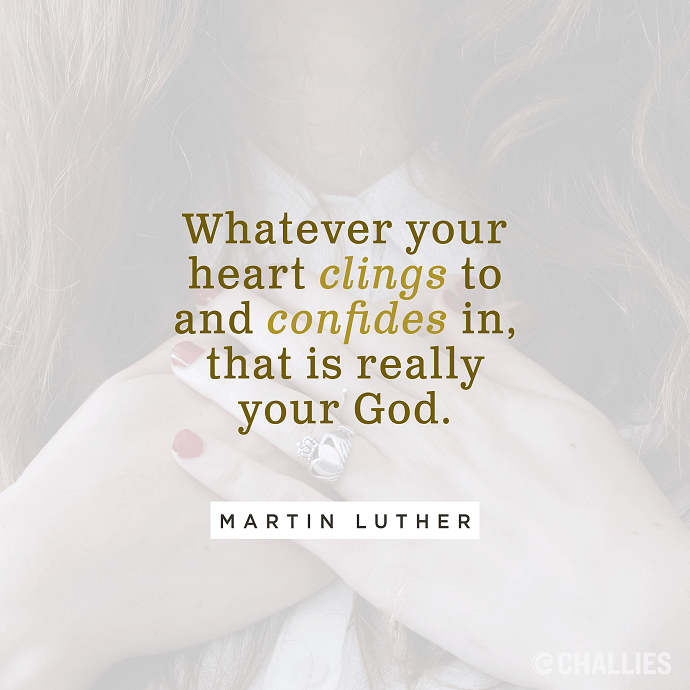 Whatever your heart clings to and confides in, that is really your God. —Martin Luther