There is a pretty good selection of Kindle deals to browse through today. There’s some Wiersbe, some Lewis, some Keller and some others…

(Yesterday on the blog: The Rules for Alliteration)

Dining in the Dark: Is Communion Christ’s Flesh?

It’s so important that we get our theology of communion right. Clint Archer writes about his transformed understanding. “It was common for me to get the chills, moved with wonder, at the ethereal sound of the altar boy’s chimes, sounded at the precise moment at which the bread of communion changed substance into the body of Jesus. I was a card-carrying Catholic, a preteen company man.”

Should We Trade in Funerals for “Celebrations of Life”?

“As a pastor, I’ve noticed how our aversion to death affects how we handle the deceased. Funerals have been traded in for ‘celebrations of life.’ More and more, I’m hearing from my congregation that they ‘don’t want a funeral’ for their loved one. Rather, they want to celebrate the life of the one they loved.”

When You’re Tired of Mourning

“In the past year we’ve joined together often, and we know the ritual will only continue. I sat in the pew, filled with grief. Overcome by too many goodbyes, too many surgeries, too much suffering- both past- and to come. I grieved for the sorrows that scroll past my phone each morning, and I grieved for the family and friends who remain blinded in the dark.”

Accepting “No” as God’s Will

R.C. Sproul: “Away with such distortions of biblical faith! They are conceived in the mind of the Tempter, who would seduce us into exchanging faith for magic. No amount of pious verbiage can transform such falsehood into sound doctrine. We must accept the fact that God sometimes says no. Sometimes He calls us to suffer and die even if we want to claim the contrary.”

A Scandal in Oxford: the Curious Case of the Stolen Gospel

Curious, indeed. If you’ve been reading the news and Christian blogs over the past couple of years, you’ve probably picked up various components of this strange tale.

“Just over 100 years ago, there existed a unique connection between Victorian New England and Zanzibar, which is a large inhabited island just off the coast of what is now known as Tanzania. America wanted ivory. Africa had elephants. And the port where thousands of tusks funneled through was on the island of Zanzibar.” But this isn’t only history; it also intersects with contemporary application.

“It would not be an overstatement to assert that any sexual revolution now being waged began as soon as that half-eaten fruit fell to the ground, its seed burrowing into the earth and growing. The story of Christianity details how this growth overtook many of its patriarchs and protagonists.” This is a long article, but one worthy of your time.

Though hypocrisy is an abomination to God that incites his sternest woes, still there is hope for the hypocrite. The hypocrite’s hope is Jesus Christ. 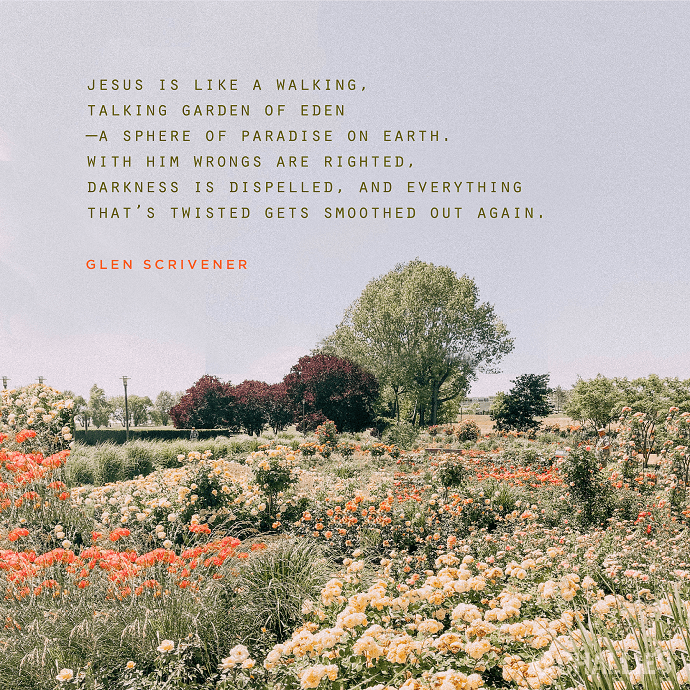 Jesus is like a walking, talking garden of Eden—a sphere of paradise on earth. With him wrongs are righted, darkness is dispelled, and everything that’s twisted gets smoothed out again. —Glen Scrivener