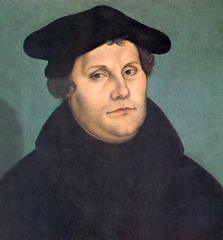 The final post in this Hymn Stories series highlights the work of the man who may be the most popular hymn writer yet: the great reformer, Martin Luther. Among his voluminous works, Luther wrote some 36 hymns. “A Mighty Fortress Is Our God,” however, is far and away the most well known.

Based on Psalm 46, the hymn is a celebration of the sovereign power of God over all earthly and spiritual forces, and of the sure hope we have in him because of Christ. After its publication, it gained immense popularity throughout Reformed Europe.

It was … the Marseillaise of the Reformation. It was sung at Augsburg during the Diet, and in all the churches of Saxony, often against the protest of the priest. It was sung in the streets; and, so heard, comforted the hearts of Melanchthon, Jonas, and Cruciger, as they entered Weimar, when banished from Wittenberg in 1547. It was sung by poor Protestant emigrants on their way into exile, and by martyrs at their death. It is woven into the web of the history of Reformation times, and it became the true national hymn of Protestant Germany. (Louis Benson)

The hymn became closely associated with Luther himself, as it embodied in its words and melody so much of the character of its author — bold, confident, defiant in the face of opposition. This association is symbolized in the monument to Luther at Wittenberg where the first line of the lyrics were engraved on the base.

There are at least 7 documented theories on the time and circumstances in which the hymn was written. Benson concludes, along with several other historians, that the most likely story is that it was written in October 1527 as the plague was approaching. The evidence for this date is the printing history surrounding it (no copies beforehand, and a growing number of copies afterwards).

There is debate about where the tune came from. In times past, it was believed to have been borrowed by Luther, perhaps from an old Gregorian melody. More recently, however, scholars are inclined to believe that Luther wrote it himself. (The story that the tune came from a tavern song that was popular in Luther’s day is the result of a misunderstanding of German musical terminology.)

There have been many attempts to translate the hymn into English. The two most enduring are Thomas Carlyle’s “A Safe Stronghold Our God Is Still” and Frederic Henry Hedge’s “A Mighty Fortress Is Our God,” Hedge’s translation being far more popular.

A mighty fortress is our God, A bulwark never failing;
Our shelter He, amid the flood Of mortal ills prevailing.
For still our ancient foe Doth seek to work us woe;
His craft and pow’r are great, And, armed with cruel hate,
On earth is not his equal.

Did we in our own strength confide, Our striving would be losing;
Were not the right Man on our side, The Man of God’s own choosing.
Dost ask who that may be? Christ Jesus, it is He;
Lord Sabaoth is His name, From age to age the same,
And He must win the battle.

And tho’ this world, with devils filled, Should threaten to undo us;
We will not fear, for God hath willed His truth to triumph through us.
The prince of darkness grim — We tremble not for him;
His rage we can endure, For lo! his doom is sure,
One little word shall fell him.

That word above all earthly pow’rs — No thanks to them — abideth:
The Spirit and the gifts are ours Thro’ Him who with us sideth.
Let goods and kindred go, This mortal life also;
The body they may kill: God’s truth abideth still,
His kingdom is forever.