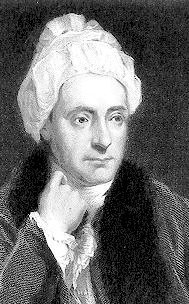 William Cowper was keenly aware of the truth that God moves in mysterious ways. His life, as John Piper describes it in his biography of Cowper, seems to have been “one long accumulation of pain,” especially mental pain. But this hymn writer trusted by faith–not perfectly, but perseveringly–that in this mysterious and maddening providence, God was working wonders.

Cowper was born in 1731 in Berkhamsted, England. His mother died when he was only 6 years old, leaving him to be raised by his father. Unfortunately, it seems that he had an unhealthy relationship with his father, who may also have contributed to Cowper’s difficulties by pushing him into practicing law. He would abandon this career in his early 30s.

The mental pain Cowper struggled with was primarily depression. He had four major battles with it through his life, leading him to attempt suicide on several occasions. He was never successful, however, and God would preserve his life until death by dropsy in 1800, aged 69.

Cowper apparently became a believer in 1764 while in residence at St. Albans Insane Asylum. He happened upon a Bible on a bench in the garden, and God used John 11 and Romans 3:25 to open his eyes to the goodness of Jesus and the sufficiency of his atoning work.

After his conversion, Cowper’s fellowship was primarily with Christians on the Calvinistic side of the Evangelical Revival that was taking place in the Church of England at that time. Throughout the rest of his life he remained convinced of God’s sovereignty and goodness, even if at times he had great difficulty believing he himself was a beneficiary of them.

Cowper’s hymn writing came as a result of his friendship with John Newton. They became friends in 1767 when Cowper moved to Olney, England to be under Newton’s ministry.

Newton saw Cowper’s bent to melancholy and reclusiveness and drew him into the ministry of visitation as much as he could. They would take long walks together between homes and talk of God and his purposes for the church. Then in 1769 Newton got the idea of collaborating with Cowper on a book of hymns to be sung by their church. He thought it would be good for Cowper’s poetic bent to be engaged.

In the end Newton wrote about 208 hymns and Cowper wrote 68. The hymnal was published in 1779. Besides “Amazing Grace,” Newton wrote “How Sweet the Name of Jesus Sounds” and “Glorious Things of Thee Are Spoken” and “Come, My Soul Thy Suit Prepare.” Cowper wrote “God Moves in a Mysterious Way” and “There is a Fountain Filled with Blood” and “O for a Closer Walk with God.” (Piper)

The hymn “God Moves in a Mysterious Way” is a combination of assertions about God’s goodness, sovereignty and wisdom along with commands to take courage and trust in him. Cowper’s use of the metaphors of storms, mines, smiles, and flowers illustrate this meaning in a timeless way. The hymn is a beautiful expression of the kind of faith that sustained Cowper through long periods of darkness and despair.

We cannot yet claim to know all the mysteries of God’s plan for William Cowper’s life. In time, as Cowper himself says, God will make plain his bright designs. But until then we can praise God for one of the fruits that is already evident–this hymn. Only he knows how many saints have had their faith sustained amidst storms and sorrows by these words. It reminds us that many of the greatest hymns grow out of life’s most difficult circumstances.

God moves in a mysterious way
His wonders to perform;
He plants His footsteps in the sea
And rides upon the storm.

Deep in unfathomable mines
Of never failing skill
He treasures up His bright designs
And works His sovereign will.

Ye fearful saints, fresh courage take;
The clouds ye so much dread
Are big with mercy and shall break
In blessings on your head.

Judge not the Lord by feeble sense,
But trust Him for His grace;
Behind a frowning providence
He hides a smiling face.

His purposes will ripen fast,
Unfolding every hour;
The bud may have a bitter taste,
But sweet will be the flower.

Blind unbelief is sure to err
And scan His work in vain;
God is His own interpreter,
And He will make it plain.