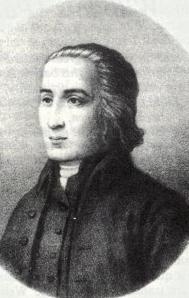 In 1738 Williams heard a sermon by the revivalist preacher Howell Harris, a fiery Welsh layman who had been influenced by the Methodist movement in England. It was through this sermon that Williams discerned his calling to go into the ministry.

Williams first pursued becoming an Anglican priest (in the Church of Wales) and entered as a deacon in 1740. However, he soon came to discover that his heart was with Harris and his itinerant work, and before long he left his small curacy in the mountains to join with the traveling Methodist preachers.

The revivalists realized that the Welsh language was lacking in hymns—the church in Wales was still primarily singing metrical psalms in their worship services. In order to promote the creation of hymns, Harris put together a hymn-writing competition between the different preachers.

As Louis Benson relates, “the prize fell easily to Williams Williams, who had the poet’s passion and a gift of verse-writing. Therefore it was not very long before he was recognized as poet laureate of the Welsh revival.”

Williams would go on to write many hymns in both Welsh and English. “Guide Me, O Thou Great Jehovah” appeared in Welsh in 1745. Twenty six years later, in 1771, a Rev. Peter Williams translated the first verse into English, prompting William Williams to translate the rest of it into English as well.

It is fitting that Williams should be the author of a hymn about the Christian’s pilgrimage on earth since as a traveling Methodist preacher, he was a pilgrim in both the spiritual and physical sense.

Williams made an extraordinary record as an itinerant evangelist. He took the whole of Wales for his parish. His travels for forty-three years are said to make an average of 2230 miles a year, at a time when there were no railroads and few stage-coaches. In this way the greater part of Williams’ life was spent, not in a preacher’s study, but in the great world of out of doors. …

It was a picturesque life, but it was not an easy one; for nature is not always kind. It involved much exposure and constant fatigue. It incurred also that menace of the mob of which all these revival preachers were victims. …

Such self-sacrificing years of evangelism and those weary thousands of miles sum up the remainder of Williams’ life.

Here is the English text of the hymn (which is known also as “Guide Me, O Thou Great Redeemer”):

Guide me, O thou great Jehovah,
Pilgrim through this barren land;
I am weak, but thou art mighty;
Hold me with thy powerful hand:
Bread of heaven,
Feed me till I want no more.

Open now the crystal fountain
Whence the healing stream doth flow;
Let the fire and cloudy pillar
Lead me all my journey through:
Strong deliverer,
Be thou still my strength and shield.

When I tread the verge of Jordan,
Bid my anxious fears subside;
Death of deaths, and hell’s destruction,
Land me safe on Canaan’s side:
Songs of praises,
I will ever give to thee.

Two stanzas have since been added. One appears to have been added by Williams when he translated it to English (“Musing on my habitation…”). I am not sure about the other.

The hymn is especially powerful when sung by a choir and has been recorded many times. Here is a good example. You can see a lot of really bored-looking people singing it at the royal wedding of Prince William. Several people have rewritten the melody but, between you and me, I don’t think any of them touch the power and beauty of the original. Having said that, Whitney Houston’s way-too-short rendition sounds like it would have been special, though it also would have been about 20 minutes long.