A short time ago I launched a new Sunday series called “The Bestsellers.” The Evangelical Christian Publishers Association tracks sales of Christian books, and awards the Platinum Book Award for books whose sales exceed one million, and the Diamond Book Award for sales exceeding ten million. In this series I will look at the history and impact of some of the Christian books that have sold more than a million copies—no small feat when the average Christian books sells only a few thousand. We will encounter books by a cast of characters ranging from Joshua Harris, Randy Alcorn and David Platt all the way to Joel Osteen, Bruce Wilkinson and William Young. So far we have looked at three titles that were awarded Platinum status in 2005; today we advance to 2007 and a surprise bestseller.

90 Minutes in Heaven by Don Piper 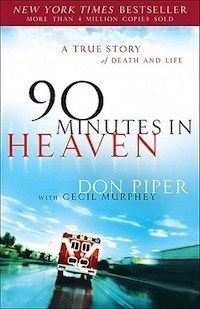 It is not often that a book races to the top of the bestseller charts and opens up the way for a whole new genre of Christian literature. But such is the case with Don Piper’s 90 Minutes in Heaven, a book that spurred an entire genre of what I refer to as “Heaven Tourism” books.

Don Piper was involved in radio and television ministry when he determined that he had been called to be a pastor. In 1985 he was ordained as a Baptist minister and was soon serving in Houston as a minister of education and single adults. It was shortly thereafter, in 1989, that he had an experience that would forever change his life and ministry. Fifteen years later, in 2004, he would team with Cecil Murphey and Baker Publishers to release 90 Minutes in Heaven, the book in which he described his experience.

On January 18, 1989, Piper was driving through rural Texas, returning from a Christian conference that had ended a little bit earlier than expected. As he was crossing a long bridge with water on either side, an 18-wheeler owned by the Texas Department of Corrections swerved over the center line and hit his Ford Escort head-on. Piper was killed instantly. The steering wheel impaled his chest and the roof collapsed on his head. Emergency medical technicians responded and pronounced him dead, laying him on the road and covering his body with a tarp.

Dick Onarecker and his wife Anita had been at that same conference and were driving the same route. They pulled up to the scene shortly after the EMTs had declared Piper dead. Onarecker later said, “The Lord just impressed on me very emphatically very urgently that I was to pray for him.” Ninety minutes after his accident, Piper awoke to hear that pastor praying and singing.

It was what happened in those ninety minutes that became the subject of his book. Piper claimed he was immediately transported to heaven. There he saw people he knew and loved—relatives, teachers who had gone on to glory years before, and friends who had died in high school. Each of these people was the age they had been when they died. They were joyful and welcoming and were there to help him through the gates of heaven. Ahead of him was a gate that looked as if it had been carved from a giant pearl. The streets were made of gold and beyond the gate was a light too bright to imagine and the sound of an angel choir. “In all honesty,” he said, “as awesome as the sight was, the sound was more amazing. I heard literally thousands of praise songs. They were all praise songs. I really couldn’t see anything. I was so preoccupied with the people around me, I couldn’t see anything. But you could sense this hum of wings hovering all about you, like you were being ministered to by angels, and they were observing this whole episode.”

And then he heard the sound of Onarecker singing “What a Friend We Have in Jesus” and realized he was joining in. He was alive and was quickly transported to Herman Hospital in Houston where doctors found that his body had been completely shattered. He would have to live with chronic pain and endure an excruciating recovery that required some thirty-four medical procedures. The book documents his time in heaven in about fifteen pages and the context and recovery in about one hundred and eighty.

90 Minutes in Heaven was published in 2004. Later editions of the book contain “A Word From the Publisher” where Dwight Baker of Baker Publishing Group explains his company’s caution in accepting the book for publication. He acknowledges the unusual subject matter and expresses that since he and his team determined the book did not contain any explicitly unbiblical teaching, and since it did not contain any supposed words from Jesus meant to guide or direct others, they would accept and promote it. They began with a very small first printing of just eight thousand copies. However, the book proved a brisk seller and those copies were depleted within days. By 2006 it had surpassed one million copies sold and in 2007 it was awarded ECPA’s Platinum Book Award. To date it has sold over six million copies, has sat on the New York Times list of bestsellers for more than five years, and has been translated into forty-six languages.

The book met with criticism on a number of points. First, and most fundamentally, Piper describes an experience the Bible does not tell us we can or should expect. While the Bible certainly describes heaven and tells us that its glories await those who have put their faith in Jesus Christ, it gives no reason to believe we would ever experience those pleasures temporarily. Many were also concerned that Piper’s description of heaven seemed based more on popular conceptions of heaven than on the brief biblical descriptions. Not only that, but Piper took upon himself the task of giving others hope based on his experience. “Because I was able to experience heaven,” he says, “I was able to prepare [friends] for it. And now I am preparing you.” Some were concerned that in so doing he diminishes confidence in God’s Word and replaces it with human experience.

The popularity of his book ensured there would be many more like it and, indeed, very soon others were recounting their journeys to heaven. Each of the following also attained bestseller status: Heaven Is For Real, 23 Minutes in Hell, The Boy Who Came Back From Heaven, Proof of Heaven, and To Heaven and Back. Many more are sure to follow before the genre runs its course.

In 2007 Piper founded Don Piper Ministries and began traveling the world, referring to himself as “The Minister of Hope.” Millions have read his books and millions more have heard him speak live or through a host of television and radio interviews. He followed 90 Minutes in Heaven with Heaven Is Real and Getting to Heaven. Baker is about to release a 10th Anniversary Edition of 90 Minutes in Heaven which will contain a personal update from Piper and a handful of other new features.

I wrote a review of 90 Minutes in Heaven just about 8 years ago—April 23, 2006—after receiving many requests from readers. At that time the book had sold 500,000 copies and was just beginning to make an impact. The heart of my concern was Piper’s Christ-less heaven, a heaven where he experienced joy and love and bliss but did not experience the presence of the Savior. I went on to review many of the other “Heaven Tourism” books and remain very concerned about their popularity. This genre can’t run its course too soon.