A few months ago I set out on a series of articles through which I am scanning the history of the church—from its earliest days all the way to the present time—to examine some of Christianity’s most notable false teachers. Along the way we have visited such figures as Arius, Joseph Smith, Ellen G. White, and Norman Vincent Peale. Today we will look at a man who commands more followers than perhaps any other person in the world: Jorge Mario Bergoglio, known also as Pope Francis. 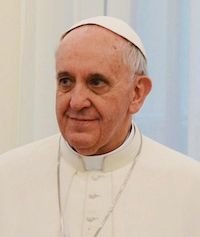 Jorge Mario Bergoglio was born in Buenos Aires, Argentina, on December 17, 1936, the first child of Italian immigrants Mario and Regina. He graduated from college as a chemical technician and pursued that career for a short time before entering seminary at the Diocesan Seminary of Villa Devoto. On March 11, 1958 he entered the novitiate of the Society of Jesus and over the next decade studied and taught in a variety of disciplines. He was ordained a priest in December 1969 and made his final profession with the Jesuits in April 1973.

In July of that year he was appointed Provincial of the Jesuits in Argentina and held that position for several years before resuming his work as a priest and a teacher and, later, as spiritual director and confessor to the Jesuits in Cordoba. As a priest he was loved and admired for his kindness and willingness to engage in patient dialog with his students and parishoners. However, he also walked into a political quagmire as the military sought to assert its dominance over the nation. He was accused of complicity with the military forces in the kidnapping of two Jesuit priests, though he has strenuously denied the charges which have not been satisfactorily proven.

In 1992 Pope John Paul II appointed Bergoglio titular Bishop of Auca and Auxiliary of Buenos Aires. He became the Archbishop of Buenos Aires in 1998, and was quickly elevated to Cardinal in 2001. After Pope John Paul II died in 2005, some reports indicated that Bergoglio received the second-most votes in that papal election, though Joseph Ratzinger (who became Pope Benedict XVI) was eventually elected to succeed John Paul. As a cardinal Bergoglio gained a reputation for his low-key lifestyle, his commitment to social justice, and his doctrinal conservatism, proving himself an ardent opponent of same-sex marriage and public efforts to introduce free contraception. One of his friends says, “He’s as uncompromising as Pope John Paul II, in terms of the principles of the Church – everything it has defended regarding euthanasia, the death penalty, abortion, the right to life, human rights, celibacy of priests.”

When Pope Benedict XVI voluntarily resigned as pope on February 28, 2013, the papal conclave elected the 76-year-old Bergoglio as his successor. He chose Francis as his papal name in honor of Saint Francis of Assisi and his lifestyle of simplicity. He is the first Jesuit to be pope, the first pope from the Americas and the southern hemisphere, and the first non-European pope in almost 1,300 years.

As pope, Francis immediately made his mark by maintaining his relatively austere lifestyle and eschewing much of the formality that has marked previous pontiffs. He chose not to live in the Apostolic Palace but instead to reside in the Domus Sanctae Marthae guesthouse. He wears simpler vestments than his predecessors and insists that he wants the Roman Catholic Church to be a church for the poor. He immediately began planning reforms to the Vatican’s expansive bureaucracy, emphasizing efficiency and transparency.

Francis has given hope to both conservatives and to progressives within the Roman Catholic Church, sometimes by apparently contradicting himself. While insisting that the Church’s view on sexuality will not be the subject of negotiation, he has also said, “If a person is gay and seeks God and has good will, who am I to judge?” He has also hinted toward a kind of universalism saying, “You ask me if the God of the Christians forgives those who don’t believe and who don’t seek the faith. I start by saying—and this is the fundamental thing—that God’s mercy has no limits if you go to him with a sincere and contrite heart. The issue for those who do not believe in God is to obey their conscience. Sin, even for those who have no faith, exists when people disobey their conscience.”

In the year since he became pope, he has received wide acclaim both from within the Roman Catholic Church and from far outside it. In 2013 he was named Person of the Year by TIME magazine as well as LGBT-interest magazine The Advocate. Esquire noted his simpler dress and named him The Best Dressed Man of 2013. Fortune magazine ranked him at the top of their list of the top-50 leaders while Rolling Stone featured him on the cover of a recent issue.

For all we can commend about Pope Francis, the fact remains that he, as a son of the Roman Catholic Church and as the leader of the Roman Catholic Church, remains committed to a false gospel that insists upon good works as a necessary condition for justification. He is the head of a false church that is opposed to the true gospel of salvation by grace alone through faith alone in Christ alone. The core doctrinal issues that divided Protestantism from Catholicism at the time of the Reformation remain today. The core doctrinal issues that compelled Rome to issue her anathemas against Protestantism are unchanged. Rome remains fully committed to a gospel that cannot and will not save a single soul, and officially damns those who believe anything else: “If any one saith, that by faith alone the impious is justified; in such wise as to mean, that nothing else is required to cooperate in order to the obtaining [of] the grace of Justification, and that it is not in any way necessary, that he be prepared and disposed by the movement of his own will; let him be anathema.”

Roman Catholic doctrine states that justification is infused into a person through the sacrament of baptism. The Catholic Catechism explains: “Justification has been merited for us by the Passion of Christ. It is granted us through Baptism. It conforms us to the righteousness of God, who justifies us.” However, this justification is not a judicial declaration by God, but the beginning of a lifelong process of conformity. It is insufficient to save a person without the addition of good works. This infusion of righteousness enables a person to do the good works that complete justification.

However, this justification can be diminished or even lost through sinful acts and in such cases it must be renewed and regained through confession, through the Eucharist, and through good works. Those who have been granted justification eventually merit heaven on the basis of the good works enabled by that justification. Again, according to the Catechism, “We can therefore hope in the glory of heaven promised by God to those who love him and do his will. In every circumstance, each one of us should hope, with the grace of God, to persevere ‘to the end’ and to obtain the joy of heaven, as God’s eternal reward for the good works accomplished with the grace of Christ.” This is another gospel, a false gospel, that adds human merit as a necessary addition to the work of Christ.

Francis also holds that Mary is mediatrix and co-redemptrix with her son Jesus, that Scripture is insufficient and must have the tradition of the church added to it, that even Christians who die may have to endure Purgatory, that Christ is sacrificed anew each time the Mass is celebrated, and so on. But no false teaching is more scandalous than his denial of justification by grace through faith alone.

Those within the Roman Catholic Church who have experienced salvation (and I sincerely believe there are those who have) have done so despite the church’s official teaching, not through it. Even while Francis washes the feet of prisoners and kisses the faces of the deformed, he does so out of and toward this false gospel that leads not toward Christ, but directly away from him. Good deeds done to promote a false gospel are the most despicable deeds of all.

Pope Francis is the head of a church that spans the globe and may well be the most powerful organization in the world. Fully 17% of the global population—over 1.2 billion people—profess to be Roman Catholic and that number continues to increase. With his efforts to reach out to adherents of other faiths, Francis has a voice that extends to perhaps a third or a half of the world’s population. This makes him by far one of the most influential people in the world.

From the time of the Reformation Protestants have insisted that Roman Catholicism is a false church that promotes a false gospel. The Bible insists that we are justified by grace alone through faith alone in Christ alone and apart from all human effort. “For by grace you have been saved through faith. And this is not your own doing; it is the gift of God, not a result of works, so that no one may boast” (Ephesians 2:8-9). While we can agree with Rome on the necessity of good works, we must insist along with the New Testament writers that such works are the fruit of justification, and have no part in the root of our justification.

But when the goodness and loving kindness of God our Savior appeared, he saved us, not because of works done by us in righteousness, but according to his own mercy, by the washing of regeneration and renewal of the Holy Spirit, whom he poured out on us richly through Jesus Christ our Savior, so that being justified by his grace we might become heirs according to the hope of eternal life. The saying is trustworthy, and I want you to insist on these things, so that those who have believed in God may be careful to devote themselves to good works. These things are excellent and profitable for people. (Titus 3:4-8)

The gospel of Rome is not the gospel of the Bible and, therefore, must be resisted and rejected.