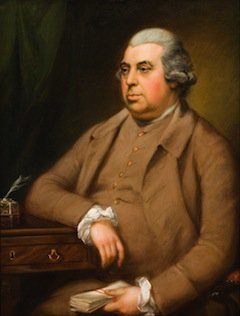 As we saw last week in the first article in this series on Christian Philanthropists, Selina Hastings, Countess of Huntingdon, lived from 1707–1791. This week, we are considering the life and giving of one of her contemporaries, John Thornton, who lived from 1720–1790.

Thornton’s family was from Yorkshire, England. His father, Robert, directed the Bank of England which, along with Thornton’s own work as a merchant in the export trade, helps explain his great wealth. In 1753, he married Lucy Watson and together they had four children. The famous hymn writer Isaac Watts had a strong, godly impact on Lucy and, through her, on John as well.

Thornton trusted Christ under the ministry of Henry Venn in 1754 and became a convinced evangelical. Venn was one of the founders of the Clapham Sect, a noteworthy evangelical group in the Anglican Church. Because of his strong Christian beliefs, Thornton was ridiculed by his fellow merchants and even the laity of the church. In fact, according to the nurse that cared for him on his deathbed, Thornton’s faith was so strong that when his children asked him whether he was now happy he replied, “Yes, happy in Jesus; all things are as well as they can be!” The last words he was able to speak were, “Precious, precious.” I’d like to think he intended to tell of the preciousness of Jesus, but instead went to be with his Lord. Either way, there is no doubt that Thornton’s life displayed the beauty and supremacy of Christ.

During his career, Thornton was known to give away half his annual income each year and he gave it to a near-endless number of causes. He paid for the printing and shipping of thousands of Bibles, hymnals, and devotional materials whenever he heard of a need. He also supported a number of clergymen, including the former slave trader John Newton and, through Newton, poet and hymn writer William Cowper. Thornton later brought Newton to London to give him the living of St. Mary, Woolnoth, where he then pastored for more than twenty years.

Thornton gave funds to other church buildings and chapels for the furtherance of the gospel and helped Lady Huntingdon in setting up her training college. He supported colonial preachers Samson Occorn and Nathaniel Whitaker at Moor’s School, an Indian charity school in Connecticut, and helped fund Dartmouth College in New Hampshire (which, in 1829, named one of its buildings Thornton Hall). He also supported George Whitefield and sent some of Cowper’s poetry overseas to Benjamin Franklin. And there must be far more besides.

Thornton died on November 7, 1790 having suffered a fatal injury at Bath. By the time of his death at age seventy, Thornton had amassed the second largest fortune in all of Europe, despite disbursing hundreds of thousands of pounds throughout his lifetime. He is remembered today not for his wealth but for his generosity.