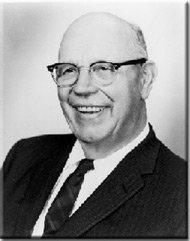 Robert Gilmour LeTourneau was an influential businessman and inventor of machinery that shook the world (since, after all, much of the earthmoving equipment used in World War II was made by LeTourneau’s factory). Born in Richford, Vermont in 1888, LeTourneau became a wealthy and generous Christian philanthropist who worked hard and shared freely.

With the reluctant support of his parents, LeTourneau dropped out of school in sixth grade to work in the mechanical field. In 1919, he married Evelyn Peterson whose father owned a company that built hay wagons. Throughout his lifetime, he lived in numerous places and practiced numerous vocations including cutting wood, mining, carpentry, farming, and, of course, mechanical work. Such a variety of experiences contributed to his impact and equipped him to leave a significant legacy.

God blessed LeTourneau with godly parents who shared the gospel with him from his birth. Although resistant for a season, he professed faith in Christ at the age of sixteen. Around the time he got married, LeTourneau told his pastor that he wanted to do more for God. Much to his surprise, his pastor told him, “God needs businessmen too.” At the time, he was $100,000 in debt because of a large-scale construction job that had gone poorly. But even though he was in the midst of such financial difficulties, he trusted God with his money, family, and life, knowing that God uses man’s weakness to showcase His strength.

LeTourneau became a leader in the Christian & Missionary Alliance Church through the numerous speaking opportunities he had in the US and overseas, and through his work as the president of both the Christian Business Men’s Committee (CBMC) and Gideons International (known for their vast Bible-distributing efforts). The fact that he had become such a renowned public speaker is a testimony to God’s enabling power in light of the fact that LeTourneau previously had a lifelong fear of speaking in front of others.

LeTourneau is known for living on 10% of his income and giving 90% of it away for the sake of God’s kingdom. Because of his belief in the power of hands-on training, LeTourneau founded the LeTourneau Technical Institute to provide a wide variety of instruction, from traditional college courses to technical and mechanical training. Later, his technical institute became LeTourneau University and the “LeTourneau Christian Center” was founded in New York. His University and Christian Center served to multiply his influence throughout the world in the lives of young, passionate Christians who loved God and loved others.

By 1959, even after donating $10 Million to Christian and educational endeavors, the LeTourneau Foundation was still worth around $40 Million. LeTourneau suffered a stroke in 1969 at age 80. He left behind a legacy of great Christian generosity. In fact, because of his reputation for giving, even during his life his colleagues called him “God’s businessman.” Inscribed on his grave are Jesus’s words in Matthew 6:33, “Seek ye first the kingdom of God and His righteousness and all these things shall be added unto you.”