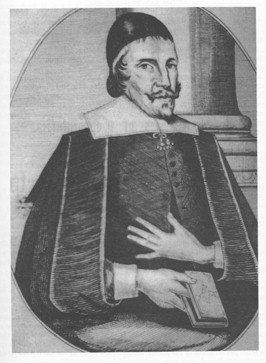 Today I continue this new Sunday series entitled “The Puritans.” I have a growing fascination with Puritan writing and decided it might be valuable to introduce you (and me!) to some of the most important Puritan writers. I will focus primarily on men whose works I have read in the past. Because I do not have the expertise to introduce the men or their work, I will be relying on experts like Joel Beeke and J.I.Packer to guide me. This week we meet Jeremiah Burroughs.

Jeremiah Burroughs was a man of conviction and a faithful pastor. Born in 1600, he was tutored by Thomas Hooker and educated at Emmanuel College, Cambridge. After graduating with a Master of Arts degree in 1624 he went into ministry in England, serving first as a pastoral assistant in Suffolk and then as a rector in Norfolk. Burroughs lost his job in Norfolk because, for reasons of conscience, he could not obey several dictates from the bishop, including the requirement that he read King James’ The Book of Sports in church, which declared dancing, archery and other recreations permissible on the Lord’s Day.

From 1638-1640 Burroughs lived in Rotterdam, Netherlands, serving as teacher in a congregation of English Independents who had relocated there.

Then, from 1640 until his death in 1646, Burroughs was back in England, serving as pastor of two of the largest congregations in London. It was at this time that he became recognized as a great preacher and leading Puritan. Thomas Brooks called him “a prince of preachers,” and the House of Commons and House of Lords invited him to preach before them several times.

In 1646 Burroughs died from complications resulting from a fall from his horse.

Burroughs was an Independent–an Anglican who believed church and state should be separate and local congregations should be autonomous. This set him at odds with Presbyterians on how churches should be governed. This was a contentious issue in England in his day and led to much strife and division personally, politically, and ecclesiastically.

Burroughs, however, was a stabilizing force who acted in moderation in his support of Independency. On his study door was the motto, in Latin and Greek, “Opinionum varietas et opinantium unitas non sunt hasustata…” which translates to “Variety of opinion and unity of opinion are not incompatible.” This was Burroughs’ way of affirming the authenticity of faith in other denominations, as well as the unity of the global church, while at the same time freeing him to advocate for beliefs that were not yet held by all.

Richard Baxter wrote, “If all the Episcopalians had been like Archbishop Ussher, all the Presbyterians like Stephen Marshall, and all the Independents like Jeremiah Burroughs, the breaches of the church would soon have been healed.”

If you are going to read just one work by Jeremiah Burroughs, make it The Rare Jewel of Christian Contentment. This, of all his works, has stood the test of time as a truly unique work. It is among the very first Puritan works I read and one that made a deep impact in my life.

Unfortunately, many of Burroughs’ works are a bit difficult to find today. They have been reprinted, but then gone back out of print. I hope this will be remedied soon. For now, consider reading:

Finally, if you wish to know more about Burroughs, you may want to consider a new biography published by Reformation Heritage Books: A Life of Gospel Peace.