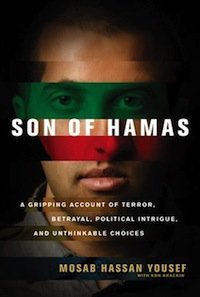 Buy from Amazon
From his earliest days, Mosab Hasson Yousef had a view of the inner workings of Hamas. The son of one its founders, from childhood he was immersed in the shadowy world of Middle Eastern terror and politics. Arrested time and again by the Shin Bet, the Israeli internal intelligence service, he eventually made the decision to become a double agent, working for Israel instead of against her. For ten years, from 1997 to 2007, he lived like this, deeply embedded within Hamas, suspected by no one, yet passing vast amounts of information to Israel. In this way he prevented assassinations, stopped suicide attacks and provided information leading to the arrests or killings of many terrorists. He was Shin Bet’s most valuable source of information about Hamas.

In 1999 he had a chance encounter with a British visitor who invited Yousef to learn about the Christian faith. Curious and intelligent, Yousef took this opportunity and was immediately struck by the difference between Jesus Christ and Mohammed, between the Christian faith and the Islam he had inherited from his fathers. In the months that followed he made a slow conversion to Christianity and was quietly baptized.

Eventually Yousef grew tired of his double life and convinced the Israelis to release him from his position with them. With some reluctence they agreed and allowed him to move to the United States where he continues to live today. Son of Hamas is the story of his life, “A gripping account of terror, betrayal, political intrigue, and unthinkable choices,” according to the rather verbose subtitle.

And it’s a good story that is told well. Yousef offers a uniquely interesting perspective on Hamas and on the political background and context in that area of the world. His story involves just enough action and intrigue to keep it interesting. At times it is almost (but not quite) unbelievable.

One thing I found interesting is that Youself reveals the Israelis not as the good guys but as the less-bad guys. He develops some level of respect for them when he sees that they are fighting for their lives against a host of nations bent on their destruction. But still he shows how they are every bit as willing as the surrounding nations to torture and kill to further their own ends. Their respect for life is not much greater than that of their enemies. So the Israelis really are not the good guys in this story.

And of course I enjoyed reading not just of Yousef’s conversion to Christianity but also the long process and the inner turmoil that got him there. It was only through much soul-searching that he was able to see Jesus Christ not just as a prophet but as the Son of God who died for the sin of the world. So often I read books like this and am disappointed to see that the author finds joy in everything but Christ. But here Yousef finds rest and joy and peace only when he submits his life to Christ.

Yousef does not want to be a hero to Christians. At the end of the book he admits his own unsuitability for that task. He is a new Christian and one who is unskilled–still a novice. And yet he is one who has now written a book about his conversion that has landed on the New York Times list of bestsellers. His testimony is powerful and I both hope and expect that God will use it to show others the light that can be theirs if they turn to Christ.

This one is well worth reading. Buy a copy and marvel at God’s grace. Marvel at how God will go to great lengths to draw his people to himself.