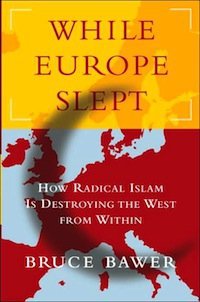 Buy from Amazon
In 1998 Bruce Bawer moved from America, his homeland, to Europe. Stunned by the accepting attitudes of Europeans, and dismayed by much of what he had experienced in the United States, he moved first to Holland and then to Norway. But all was not as it had seemed. “The main reason I’d been glad to leave America was Protestant fundamentalism. But Europe, I eventually saw, was falling prey to an even more alarming fundamentalism whose leaders made their American Protestant counterparts look like amateurs. Falwell was an unsavory creep, but he didn’t issue fatwas. James Dobson’s parenting advice was appalling, but he wasn’t telling people to murder their daughters…Pat Robertson just wanted to deny me [as a homosexual] marriage; the imams wanted to drop a wall on me. I wasn’t fond of the hypocritical conservative-Christian line about hating the sin and loving the sinner, but it was preferable to the forthright fundamental Muslim view that homosexuals merited death” (33).

While Europe Slept documents the mounting evidence indicating that radical Islam is destroying the West from within. Massive Islamic immigration to Europe has changed the face of the continent, leading to the likelihood that the Europe of the future will bear no resemblance to the Europe of the past. He found throughout Europe rapidly-expanding Muslim enclaves in which “women were oppressed and abused, homosexuals persecuted and killed, ‘infidels’ threatened and vilified, Jews demonized and attacked, barbaric traditions (such as honor killing and forced marriage) widely practiced, and freedom of speech and religion firmly repudiated.” In short, he found Muslims in Europe carrying on the religious traditions of their homelands. Disturbingly, many of these Muslim people despise the nations they have chosen to live in and look forward to the day when they will be able to form a majority and institute the sharia law. Many of them, even those who have lived in Europe for several generations, have made no attempt to integrate with the new cultures and may not even speak the language of the nations they live in. European press and politicians have turned a blind eye to this growing problem. Many of those who have dared to stand up against this have found themselves vilified as bigots. Many have been killed.

Europe, it seems, is coasting gleefully towards cultural suicide. To prove this, Bawer first examines Europe prior to 9/11, saying that at this time Europe was in denial. He then turns to the post-9/11 world and shows how blame for these attacks quickly shifted to America and Jews. The final section is ominously titled “Europe’s Weimar Moment: The Liberal Resistance and Its Prospects.”

Within Europe is a swiftly growing Muslim presence that threatens the entire continent. With the growth in numbers comes a growth in strength and militancy. Realistic estimates seem to indicate that it will only take another twenty or thirty years before Muslims become a majority in many European nations. There seems to be a deliberate movement to swiftly populate the continent. Bawer discusses a study which examined a group of 145 Turkish men who immigrated to Denmark as guest workers in 1969 and 1970. “By the year 2000…the importation of spouses and other family members, combined with a high fertility rate, had turned this group of 145 into a community of 2,813. Those who had married had all married Turkish women whom they brought over to Denmark under ‘family reunification.’ Some of these men were later divorced or widowed and then remarried, again to Turkish women. Three married yet a third time–and again, in each case, the wife was a Turkish import. The rate of ‘fetching marriages’ among this group, then, was over 100 percent, while the average number of children per family was 6.4–several times the overall Danish average (181).” The second and third generations of these families continued to marry spouses imported from abroad and largely refused to integrate with Danish society.

Through case after case, example after example, Bawer builds his argument. And it is a convincing argument. Europe is in trouble.

I was reasonably impressed with Bawer’s perspective on American politics. For a man who has made a career out of complaining about America, and for a man who is notable for his advocacy of homosexuality, his perspective on American politics was surprisingly balanced. The mere fact that he would write a book such as this attests that he is far more conservative than we might expect. While clearly not a lover of George W. Bush, he seemed to support the invasions of Afghanistan and Iraq. At the very least, he respects Bush for his resolve and his desire to solve a growing problem. He has nothing but ridicule for Michael Moore. Despite having left America, Bawer clearly loves his homeland and continues to believe in what America stands for.

While this book is long on diagnosis, it is somewhat short on cure. Of course a problem of this magnitude cannot be quickly or easily solved. Nor can it be solved by stooping to acts of barbarism. Bawer points approvingly to some of the stop-gap solutions adopted by various European nations, such as deporting particularly militant imams and forbidding “fetching marriages” for anyone under a certain age. He proposes a few of his own, though unfortunately they are not exhaustive. He does, however, point to the clear need for strong leaders, men like Winston Churchill, who have the strength and resolve to deal with such a situation. He suggests that European nations must seek to integrate immigrants rather than simply allowing them to immigrate and then allowing and even encouraging them to isolate themselves. One of the great ironies in this book is that the most obvious and surely the most effective cure for the dominance of Islam is for Europeans to increase their birthrate and produce larger families. And yet Bawer is a homosexual who lives in a country with one of the world’s lowest birthrates. He cannot be part of this solution.

One worthwhile reflection that comes near the end of the book deals with Islam and democracy. Bawer reflects on whether or not it is possible for Islam and democracy to co-exist. Clearly the U.S. government believes it is possible, for they have helped build democratic governments in Iraq and Afghanistan. However, many people are not convinced that these governments can withstand the Koran which seems to indicate that democracy stands opposed to the Muslim faith.

As the reader works his way through this book, he’ll have to note the clear parallels between the situation today and the situation prior to the Second World War. There is a strengthening presence in Europe that is opposed to freedom. This may be a case in which those who ignore history are doomed to repeat it. The author brings this parallel to the forefront. “Now, once again, Europe is at a Weimar moment. Poised between the aggressive reality of Isalmism and the danger of an incipient native neo-fascism, it is governed by an elite, many of whose members, even now, remain determined not to face reality. The spectacular failure of integration has brought some nations to the verge of social chaos and is leading others steadily in that direction; and European leaders, unwilling to shake off their faith in multiculturalism and the welfare state, are spending ever-increasing sums to subsidize and deepen that failure, thus leading their nations inexorably toward economic ruin as well” (233).

“In the end,” he says, “Europe’s enemy is not Islam, or even radical Islam. Europe’s enemy is itself–its self-destructive passivity, its softness towards tyranny, its reflexive inclination to appease, and its uncomprehending distaste for America’s pride, courage, and resolve in the face of a deadly foe” (233).

If Europe is to survive this impending crisis, she must take action. There is still time to act deliberately and rationally. But if Europe continues to sleep, she will eventually awake only to find that she has been overrun. While Europe Slept is a solid contribution to the growing discussion on this subject. It is alarming without being alarmist. I trust that it will alert more people to a problem that must be dealt with, for time may just be growing short.