This morning I posted a review of Shon Hopwood’s new memoir Law Man. After reading the book I tracked down the author and did an interview with him. Give it a read, as I think you’ll enjoy it. 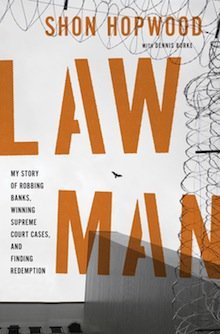 If you had to give a short summary of the theme of your book, what would it be? I don’t mean an outline of the contents as much as an underlying theme. What will the reader take away from it?
I think different people will find different themes, depending on their worldview. Some are going to come away from the book and say, “Why does a former bank robber deserve forgiveness, his wife, law school, and to tell his story in a book?” Others will see redemption through hard work and dedication—your typical pick-yourself-up-by-the-bootstraps story. But the real crux of the story is God’s grace. He poured out his grace not only through my salvation, of course, but also through the help of others. I would love to sit here and tell everyone that I’m super smart and that it was my legal ability and hard work which resulted in the Supreme Court granting two of my cases. But that simply isn’t true.

You are a professing Christian and outline the story of your conversion in the story, yet this isn’t a “Christian book” per se. Why did you choose to for the mainstream instead of a book that would be sold in the Christian market?
I really struggled with that decision. At one point, Crown Publishing and I talked about writing two books: one mainstream book and one Christian book. It never materialized. And, after praying about it for a long time, I realized that there was a reason God had given me a book deal. It wasn’t just to tell my story of sin and grace to believers; it was to show unbelievers that, through Jesus, even those who committed crimes can be redeemed. I also knew that if the publisher labeled the book Christian and if it was segregated to the Christian section of bookstores or Amazon, very few unbelievers would read it. So, I decided to write a mainstream book that contains a Jesus story with the hope that those who don’t or won’t normally read a Jesus story, will still read this book and hear the good news.

Can you tell me about your local church and how you and your family are involved in it?
My wife, Annie, and our two children attend Mars Hill Church U-District in Seattle, Washington. We chose to accept a scholarship at the University of Washington School of Law, in part, because we found Mars Hill online, and we wanted to land in a Bible-based church. We love Mars Hill and our church family, especially our bible study leaders who have lovingly served us with friendship and leadership in community. And Pastor Justin Holcomb has gone out of his way to make us a part of the church’s future. Our faith has grown by leaps and bounds in the short time we’ve been at Mars Hill. In a few short weeks, Annie and I will, for the very first time in our lives, become members of a church. We are excited about that. 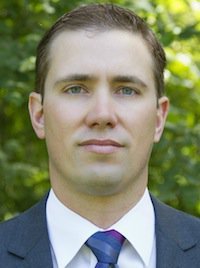 One of my favorite themes in the book is the quiet work of Christians in the background of your life, whether that was your mother sending you books, people in your town praying for you, or fellow prisoners who were serious about studying the Bible. How do you interpret all of that, looking back on it now?
If you look back at how things unfolded, you can really see God’s design in everything. At the time, I didn’t realize the cumulative effect of what people were doing. I realize now that every little thing, from my mom sending me A Purpose Driven Life to my next-cell neighbor in prison turning from drug dealer to Christian, was all a part of God’s plan to show me his love and grace. And it made me understand that I had a choice about what my life would be like moving forward. I could keep trying to punch God away or I could hug him closer. Hence the James Weldon Johnson quote in the front of the book: “Young man, young man, your arm’s too short to box with God.”

When in prison you read a lot of law books and then prepared a petition for the Supreme Court that was accepted. Honestly, that doesn’t sound all that impressive to me, but I think that’s because I just don’t understand how unlikely it was that anyone would pay attention to that kind of a petition. Can you give me a little context or give me an analogy that helps me understand what this means?
Getting the U.S. Supreme Court to hear a case is one of the most difficult things to accomplish in the legal field. The Court receives around 8,000 petitions a year and only hears around 80 of them. So the odds are low even for attorneys. When you add in the fact that this was the second legal brief I had ever written and it was filed by an indigent prisoner, not an attorney, the odds of us winning that case were astronomical. The fact that I was able to have it happen twice while I was in prison is nothing short of a miracle; it was the equivalent of winning the legal lottery. Obviously, God had his hand in it all.

What are your hopes for the book? How will you gauge whether it has been a success?
The main goal is for unbelievers to see the power of Jesus through my story. Beyond that, I’d like to be a beacon of hope for the over 2.3 million people who are incarcerated in the United States. The world has largely given up on those people even though they are as redeemable as the next person. I also find that parents whose children made poor choices in early adulthood also derive some hope from my story. If anything, my story shows how a parent’s love can work. My parents prayed for me daily for decades and God eventually answered their prayers.

By my count there are 13 pictures of you in the book. You aren’t smiling in any of them. Why not?
Tim, who put you up to this question? My mother, or my wife? They are constantly telling me to smile in pictures. I think I look goofy in pictures when I smile so that is why I don’t. Although I never noticed that about the pictures in the book until you called it to my attention. I should be smiling because God has given me many reasons to smile these days.