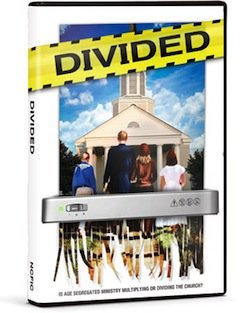 Your church is heavily influenced by evolutionary thinking. It is founded on principles created by pagans and for pagans. You have succumbed to hellish thinking and imposed it upon your church. At least this is the case if your church has a nursery or a Sunday school or any other kind of program that involves dividing people by age. That is the rather audacious claim of Divided, a documentary that is being heavily promoted by the National Center for Family Integrated Churches (NCFIC). Divided is a film about youth ministry. Kind of. At its heart it is a movie that promotes Family Integrated Church (FIC).

Divided follows a young filmmaker named Philip Leclerc as he seeks to find answers to the tricky question of why young people are abandoning the Christian faith. This journey quickly leads him to the leaders of the FIC where he learns that age segregation is at the very heart of our problems while family integration is the key to rebuilding the church and recapturing the next generation.

The film begins with a long list of scary statistics pointing to the sad reality that young people are increasingly abandoning their churches (a genuine concern that I wrote about recently). This introduces the tension the movie depends upon. How do we guard our children against becoming just another set of sad statistics? Leclerc begins his journey at a Christian music festival where we see young people head-banging to Christian rock and just plain having fun. He speaks to youth pastors who believe the key to reaching youth is to be cool and hip. He speaks to young people who believe in evolution or who don’t even know what they believe. He says about this festival that people were being taught that “the fun music of the world can bring you closer to God.” And in this way he paints an ugly picture of an entire generation.

Having done this, he finds the best and brightest of the FIC movement and allows them to interpret. This sets an intellectual like Voddie Baucham against a girl with a face full of piercings who partied so hard at the concert that her mohawk collapsed. It’s hardly a fair fight. What Leclerc does is what so many documentarians do: he chooses his representatives very, very carefully. He chooses the intellectuals of the FIC to represent his view and chooses the young and foolish to represent the other side. It’s hardly subtle and not at all fair. He builds his case on a cliche.

Once he has set the two sides in opposition, he allows proponents of FIC to pile on. One by one Scott Brown and Voddie Baucham and Doug Phillips and Paul Washer and many others talk about how youth ministry has ruined the church–and not just youth ministry, but any kind of ministry that divides people by age. These men make the claim that the first 1800 years of the church knew no age segregation whatsoever; it is only in the past 200 years or so that anyone considered dividing children by age. They claim that any kind of age segregation stems directly from evolution and has roots in paganism. Any kind of age segregation therefore sows pagan seeds of division.

These leaders claim that the Bible clearly teaches that we must not age segregate. Ever. The classroom is a pagan creation and so too is the Sunday school. Leclerc goes so far as to claim that the mass youth exodus may just be God’s hand of punishment upon the church for our active disobedience in ignoring what Scripture teaches.

So what do we do with Divided?

I think we need to see it for what it is. This is a movie that heavily promotes a very obvious agenda. It does not take long for us to learn that Leclerc is a member of a Family Integrated Church and that he has been for many years. This then casts doubt on this journey he is taking. Is it a true journey to learn a better way to do church? Or were the questions answered long before the film shoot even began?

It is notable that the film does not offer any measured response to FIC. There are many conservative, biblical Christians who reject FIC and I am sure it would not have been difficult to interview a couple of them. Leclerc does not allow any of them to speak. Instead, he sets FIC against the girl with the mohawk. The purpose of the film is not primarily to call people away from youth ministry, but to call them toward FIC. After all, FIC is not the only valid response to the rowdy, win-them-with-fun kinds of youth ministry. I have been in conservative churches almost all my life–churches that deliberately offer age-appropriate classes. These classes have raised up a generation of godly young people who know and love the Lord. Divided says that all of these classes are founded upon paganism and will produce pagans. This is demonstrably untrue.

Perhaps my biggest disappointment with the film, then, is it lumps all non-integrated churches together. Those that have Wednesday evening classes for children end up in the same category as churches that have entire Sunday morning services geared specifically to entertaining the teenagers. Churches that have an evening set aside for youth fellowship end up in the same category as the churches that build their whole youth ministry around partying and Christian rock. This is not only uncharitable but also utterly ridiculous. According to the subtle suggestions of this documentary, even the best youth programs are utterly unbiblical and will cause most of the young people to fall away from the faith. That is complete and utter nonsense.

We also need to see that the claims of FIC extend far beyond Sunday school. The film even suggests (not too subtly) that allowing your children to participate in any kind of program led by someone other than the father is a way in which you turn their hearts away from the father and toward someone else. This talk of “turning their hearts toward” is foundational to FIC and other associated movements. But can a person’s heart only be inclined in one direction? Does a young person who comes to love and respect his pastor necessarily mean that it comes at the expense of love and respect for his father? This sets up a false and unfair dichotomy.

And finally, we need to reject the claim that the Bible demands FIC. Despite the claims of FIC leaders, it is clear that the Bible does not explicitly forbid all kinds of division by age. Voddie Baucham offers Ephesians and Colossians as examples of God’s command that the entire family be present in any church setting. That is a tenuous claim at best and one that is easily disproven. As Christians we have freedom to act with wisdom in areas where Scripture is silent. FIC would take this freedom from us.

The sad irony of Divided is that this film and the movement it supports will undoubtedly cause plenty of its own division. And, indeed, it must! It majors on the minors, making family integration the pivotal and central doctrine for the church. It identifies a genuine problem but attempts to solve it in a way that elevates methodology instead of the gospel message. It’s a destructive message wrapped in a poorly-made documentary. The church would do well to ignore it.

Here are a couple of useful resources on FIC: