Last night my wife and I were reminiscing about this web site, about my growing career as a writer (at least I hope it’s growing) and about the church contexts that produced me, that produced this blog. As we spoke I realized that I’ve never really discussed the genesis of this site and, by extension, the church I was part of when I began writing. I spent about 5 years in quite a poor church after tossing aside Reformed theology and this site really grew out of that experience. I thought it might be interesting to go back a few years and talk about those days. I sat down to write and soon found that this is going to have to be a multi-day kind of article. But it’s biographical, so I hope you can at least find some human interest in it. Let me start by telling you a little bit about me…

I grew up within the Reformed tradition and with a firm grounding in Reformation theology. My parents were both saved near the end of their time at college and both were saved after growing up in unbelieving homes. They heard the gospel through Pentecostal friends who faithfully prayed for them and led them to the Lord. Naturally they, too, became Pentecostal. However, shortly after becoming Christians and getting married, they headed to Europe for a honeymoon (and later to live for a while) and found themselves at Francis Schaeffer’s L’Abri. It was there that they came face-to-face with sound theology and this theology would forever shape them. I was baptized as a child in an Anglican church (they were getting closer to the Reformed tradition) and soon thereafter my folks became members at a PCC congregation (Presbyterian Church of Canada) in Toronto.

My parents were Presbyterian at heart and my earliest church memories are of the sweet fellowship of that Presbyterian church. Many of the members of that church remain dear family friends even now. Eventually we left that congregation to be part of a plant in the nearby suburb of Unionville–a church plant that soon disintegrated in ugly circumstances brought about by one of the members.

Around that time my parents become friends with the pastor of a nearby church that was in the Dutch Reformed tradition and before long we started attending that body (it was a Canadian Reformed Church for those who just have to know). We remained in those churches for many years, except for a year-long trip to Edinburgh, Scotland, during which my father studied at the Free Church of Scotland seminary. But from the time I was in grade school to just about the time I graduated from high school, I was part of the Dutch Reformed tradition, despite having no Dutch blood. We moved around a little bit in these years, eventually settling in Ancaster, Ontario, but what was always true was that we were the only non-Dutch family in the churches and schools we attended.

These Dutch churches were largely theologically sound. They held to the theology of the Three Forms of Unity (the Heidelberg Catechism, Belgic Confession and the Canons of Dort). During these years I also usually attended schools that were connected to the churches, and all the while learned knowledge of the Bible and knowledge of theology. Every Tuesday night I attended catechism classes and memorized the bulk of the Heidelberg Catechism. Many Sundays my father would also lead us through the Shorter Catechism. And all the while we enjoyed family devotions and great discussions around the supper table. I was raised in a thoroughly, distinctly Christian context.

And so I came into my teenage years as a kid who knew a lot of very good theology and who had a sound grasp of the Bible. A strange thing happened along the way. Sometime in my young teenage years a [non-Dutch] friend introduced me to Christian rock music. Now the Christian rock of the late 80’s and early 90’s was often silly, often light and over-the-top. And yet there was something in that music that appealed to me. Within the Dutch tradition and its heavy covenantal emphasis, I had always heard that I was a Christian; I had always heard the preachers and teachers speak of “we,” but rarely of “I.” The emphasis was on the church, on the collective, on the people of the covenant. Never did these preachers or teachers challenge us in a personal way. Never once did any of them ask, “Are you saved?” Never once was I challenged with that thought that I might not have true faith. Yet within these Christian rock songs, these songs by Petra or Whiteheart or Degarmo & Key, I heard people who loved the Lord and who encouraged me to give my life to him. And they challenged me very deeply.

I loved to read as a kid and as a teen, but did not enjoy reading Christian non-fiction. At one point my parents bought me a couple of books by R.C. Sproul and I made a point to never open them. I loved reading history and I loved reading novels. At one point a friend gave me a copy of This Present Darkness by Frank Peretti. It’s a rather silly novel, actually, but once again, it did something to me and did something in me. Through his novel I was once more brought face-to-face with the idea of a personal relationship with the Lord; I came to realize that what I needed was not a corporate faith, but a personal faith. I remember one night listening to that Christian music (it was a Whitecross album this time) while reading Peretti’s book and in that hour falling to my knees and crying out to God to save me. It was only later that I realized that while the church had never called me to repentance and faith, my parents had been doing so all along. And God was pleased to answer their prayers. 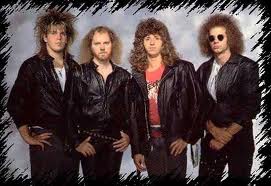 I bet you didn’t know that I was saved through God’s strange and immediate means of a big-haired Christian metal band and Frank Peretti, did you?

There were some immediate changes in my life. I knew I had changed because my friends within the school and church began to mock me and call me a Jesus Freak. I found myself throwing out some of the non-Christian music I had collected, not because it was so evil, but because it represented something I wanted to leave behind. These were years of slow growth, but growth nonetheless.

It was not long before I left those schools. In those days Ontario had 13 grades–students would get through twelfth grade and then spend a year earning what they called OAC’s, the courses that would allow entrance to a university. I was not a very dedicated student and was eager to get out of school as quickly as possible, so I decided to “fast-track,” which is to say I would do the final two grades in one year. To do that I had to go to a nearby public school–the Christian high school could not support fast-tracking.

And so, as a new Christian and one who had never experienced much of the wider Christian world (and who, for example, had never even heard of John MacArthur, had never heard of the Rapture and who thought all Baptists were inevitably hopelessly shallow in their faith), I set out to Ancaster High School for what would be a busy year of school.

Let me relate just one experience from my first day of school. I walked into my first class on my first day and sat immediately in front of a pretty girl with short brown hair. She turned to me and a sudden look of recognition came over her face. The first words she spoke to me were, “If you ever tell anyone, I’ll kill you. I’ll absolutely kill you.” It was something of a foreboding start to my new high school. But, as it happens, that girl would prove to be pretty important to my life, though not for a couple more years. Her name, I learned, was Aileen.

Now, the purpose of writing all of this is to tell you about a few formative years that came in my mid-twenties and the blog that was birthed through those years. We’re not there yet, but we will be soon. Stay tuned tomorrow. (Read Part Two Here)