Snow-Diving Foxes – “I’m a fox. It’s January. I’m hungry. I want a meal. My food, however, is buried 3 feet down, deep in the snow, hiding. It’s alive, in motion, and very small, being a mouse. So how does an above-ground fox catch an underground mouse? Well, the answer is nothing short of astonishing.”

Evangelicals and Hollywood Muck – I appreciate Trevin Wax’s thoughts on the subject of movies and whether Christians really need to go looking for redemptive themes in all of them.

Actively Engaged – Matt Chandler provides a “plea to not sit on the sidelines and hope this horrific genocide of the unborn works itself out.”

Rescued – Maggie Paulus’ touching article at True Woman begins like this: “When I was just a little girl, like a wee little thing, I had a different mom and dad. And they were kind to me, but they had hurts and they had addictions and they didn’t know how to take care of themselves, much less a wee girl and her little brother.”

It is a hard matter to enjoy the world without being entangled with the cares and pleasures of it. —Thomas Manton 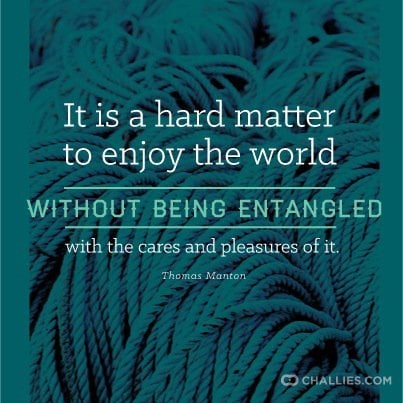