Salvation in a Dementia Ward – Read this one! “The next moments stunned me. Despite past experiences of being near and ministering to people high on drugs, involved in the occult, or living in mental asylums, never had I witnessed anything like this. Without hyperbole, I can only describe it as demonic.”

World Vision Reverses Their Decision – “Today, the World Vision U.S. board publicly reversed its recent decision to change our employment conduct policy. The board acknowledged they made a mistake and chose to revert to our longstanding conduct policy requiring sexual abstinence for all single employees and faithfulness within the Biblical covenant of marriage between a man and a woman.”

How to Memorize Books of the Bible – Here’s a little bit about the how and why of memorizing long passages of Scripture.

Noah – Greg Thornbury was invited to watch the new movie Noah. “Our small group spent a considerable amount of time both before and after film hearing from Aronofsky himself and co-writer Ari Handel. Both were interested in listening to and responding to our theological and critical reactions. My immediate response was that this was a film with profound moral and theological imagination. My thoughts below are my conclusions after several weeks of reflection.”

Division Begins with Departure – Jared Wilson says, “Christians who affirm the normative, traditional, historical, orthodox view of the Bible’s teaching on various sins are always accused of being divisive when in sticking to their affirmations they must disassociate with those who don’t.”

If the cross is not foolishness to the lost world then we have misrepresented the cross. —Steven Lawson 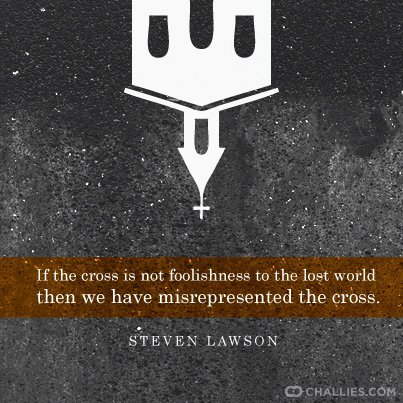