I’m spending the day at Boyce College (Southern Seminary) today. If you’re there and happen to see me wandering about, please do say hello. Especially if I look lost…

Today’s Kindle deals include a book by Horatius Bonar and a book by the Babylon Bee, among others.

(Yesterday on the blog: Is It Sinful to Observe (or Not To Observe) Lent?)

Yes, There are ‘Thorns’ in Vocational Ministry Too

I’ve seen too many people look for fulfillment in ministry. So has Michael Kruger, I guess. “Many Christians, who feel just this sense of meaninglessness and frustration in the corporate world, will turn to vocational ministry as the cure. Surely, if I am preaching the gospel and building the Kingdom of God, one might think, then I will finally find the job satisfaction I am longing for. Right?”

“I was skeptical that shining a bright light in my face would make me feel better, even though people do it all the time. And even if it did work, I assumed it’d address the symptoms of my winter lethargy without fixing whatever the underlying problem was. But light therapy, it turns out, is actually very effective.” I’ve often wondered about these, especially since I mostly work out of my basement.

This is a long cover story for Christianity Today and is well worth reading. “When asked about their overall happiness in retirement, doubts crept in. They reported a powerful sense of loneliness. Even though they had more time for family and friends, they missed the bonds they experienced at work, or ‘relationships with a purpose.’ In short, retirement as a never-ending vacation is, for many, much more appealing before they actually try it.”

The Case That Could Bring Down Canada’s Justin Trudeau

You may have heard about the political trouble in Canada. Here’s a brief primer. “Canada’s prime minister, Justin Trudeau, is facing the biggest political scandal of his administration. The affair centres around allegations that his former attorney general, Jody-Wilson Raybould, was improperly pressured by some of his closest advisers to prevent the prosecution of a large Canadian engineering firm over accusations of fraud and bribery.”

Murder By Any Other Name

“How does one group of people murder another and sleep at night? Answer: they don’t. German soldiers didn’t slaughter humans, Southern whites didn’t lynch humans, and Planned Parenthood isn’t killing humans either.” This is a common and devastating pattern.

I enjoyed this beautifully-written reflection. “I wonder how many faces I’ve seen in my life. Passed on streets and subways. Sat beside in waiting rooms and theaters. Stood behind in various lines and checkout lanes. And scrolled quickly past on social media. And I wonder, too, at how relatively few of these faces I remember. Really remember. As compared to the incalculable whole, I know that number can’t be many.”

How Social Media Is Reshaping Conferences

“For decades, Christian college students have gathered en masse to praise, pray, and hear the Word preached at national conferences like these, then returned to their campuses reenergized about the gospel and ready to share what they’ve learned. But in the age of social media, their testimonies don’t wait until they’ve left the stadiums; attendees like Park take their followers along. They process the event through snapshots and social media posts, proclaiming the Good News to their friends in real time.” From a speaker’s perspective, it can be very encouraging and incredibly discouraging to see people respond in real-time. Rule: Don’t check Twitter until at least a few hours after speaking.

Give your children the privilege and the benefit of access to people who are old and wise and godly and not their parents. 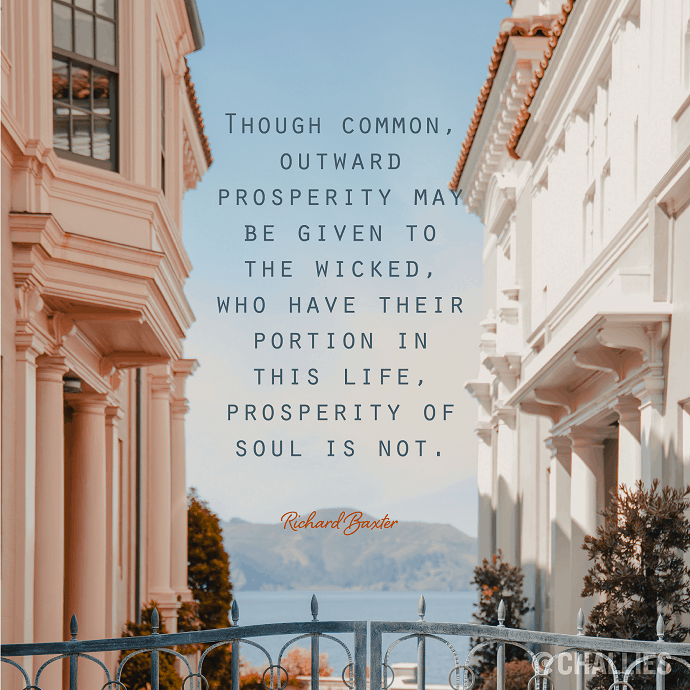 The common, outward prosperity may be given to the wicked, who have their portion in this life, prosperity of soul is not. —Richard Baxter