There are some interesting titles available today over on the Kindle deals page.

(Yesterday on the blog: No Hand But His Ever Holds the Shears)

Clint Archer: “The death of RBG should cause all of us to pause and consider. It must be difficult to be a judge and then have the gavel reclaimed in death, to be judged for every decision, action, word, thought, and motive of your life. But this will be the experience of us all at some point, and brings true equality for all; death is the ultimate equalizer.” (See also Al Mohler’s Fast and Furious: The Battle for the Supreme Court is Shaping Up Right Now.)

Was the Divinity of Jesus a Late Invention of the Council of Nicea?

Michael Kruger answers. “One of the most common objections to Christianity is that the divinity of Jesus was ‘created’ by later Christians long after the first century.  No one in primitive Christianity believed Jesus was divine, we are told.  He was just a man and it was later believers, at the council of Nicea, that declared him to be a God.”

They Told the Truth Even When It Hurt

Tim Barnett of Stand to Reason, whom I believe I first met while standing in line at an airport, explains an interesting indicator of the reliability of the scriptures.

5 Questions to Help Guard Against Selfish Ambition in Ministry

Juan Sanchez asks some good questions here. “Allow me to offer five self-examination questions to help us guard against the temptation to labor for a gospel fruitfulness that is rooted in selfish ambition.”

Abby Hutto considers some of life’s discouragements and says, “I would give up, were it not for this thought: my God is a patient gardener. He will finish the work he has started. He will not abandon us in the dirt.”

On Turning 30 and Unfulfilled Desires

Here’s Hope on turning 30 and thinking about her unfulfilled desires. “It was February 15th. The timing of it all seemed like a teasing from God, a cosmic joke at my expense. Another Valentine’s day had passed with no man in sight. How could I be single at this age? Twenty-seven was coming next month, and I was further than ever from my heart’s desire. I had once imagined that at twenty-six, I would be in ministry with the man of my dreams with baby number one on the way. Instead, I was living alone in Savannah, Georgia, far away from my home state of Maine and even farther from all I’d ever wanted.”

The Siblinghood of the Saints

“We are brothers and sisters, called to love one another deeply whether we like it or not. Do we think of this when we interact with fellow children of God? Do we ponder the implications of this truth when relationships within the church are difficult? Do we relate in a way that demonstrates God’s love to the watching world? ”

Shaping your character is so much more important than shaping your body. The kind of formation that concerns God most is not physical but spiritual. 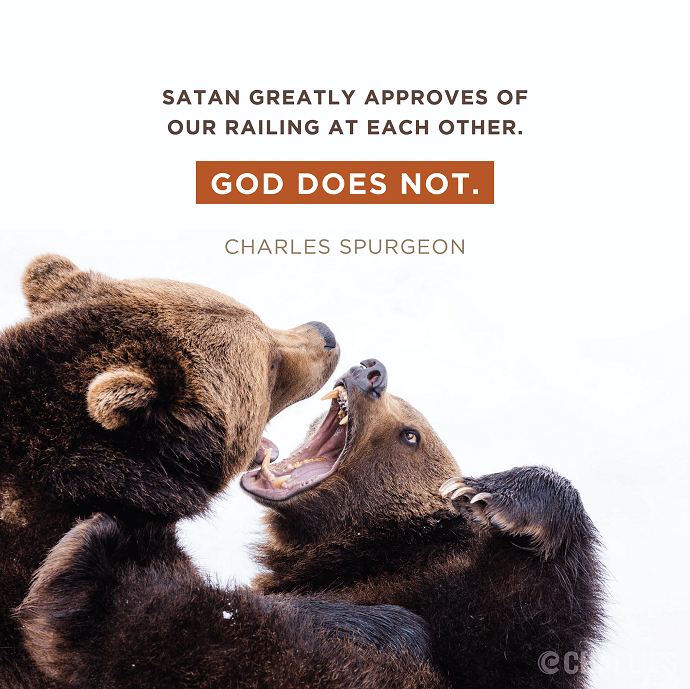 Satan greatly approves of our railing at each other. God does not. —Charles Spurgeon