Today’s Kindle deals include a newer one and a couple of classics.

Crossway has just released the ESV New Christian’s Bible. It seems like the kind of thing that will interest lots of individuals and churches.

(Yesterday on the blog: It’s All About the Conscience)

Here are John Piper’s reflections on a particularly strange moment in his lifetime of preaching.

Recovering the Priority of Personal Holiness

Alistair Begg: “What gave John Owen success in ministry was not so much his oratory skill, nor his evangelistic zeal, nor even his love for the people he shepherded. John Owen was used mightily by God in all these ways because he was a man characterized by personal holiness. And in an age when the church is emulating the world, where it is no longer distinguishable from our pleasure-oriented culture, the example of John Owen shines like a beacon on a stormy night.”

Why Time Seems to Fly as You Get Older (Video)

I’m not qualified to judge if this is true, but it’s certainly interesting.

Why Denominations and Networks Matter

Here are some pretty good reasons why denominations and networks still matter.

Two Kinds of Sermons that Seem Expositional But Really Aren’t

We can preach out of the Bible and preach what is true, but still not preach a fully expositional sermon. Here’s how to tell the difference.

Darby Strickland has written a two-part series about spiritual abuse in marriage and they are both worth reading. “Spiritual abuse occurs when an oppressor establishes control and domination by using Scripture, doctrine, or their leadership role as a weapon. If a husband exhibits control-oriented leadership by lording his power, demanding submission, or using Scripture in daily life or during conflict to shame and punish, then these are signs of spiritual abuse.”

“The word ‘but’ indicates some kind of exception. Time and time again. And perhaps if that’s the way we say it, then there’s actually a little bit of revelation of our own hearts in that. Perhaps we think, down in the dark places of our own hearts, that any prohibition is an exception to love rather than an outflow of it. Which brings us, of course, to our relationship with God.”

Flashback: All Those Things I Will Leave Undone

Life is a vapor, too short, too fleeting. But I believe this: I may not have time to do everything I would like to do, but I have all the time I need for those things that God expects me to do. 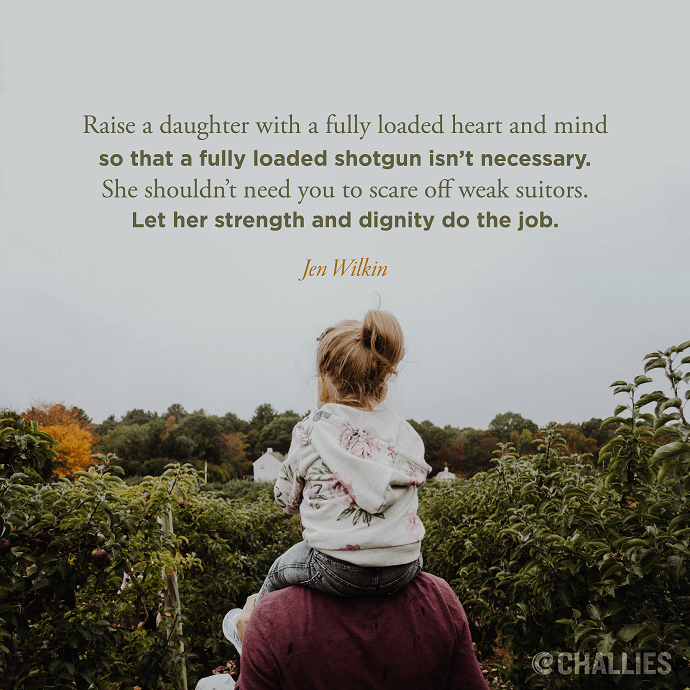 Raise a daughter with a fully loaded heart and mind so that a fully loaded shotgun isn’t necessary. She shouldn’t need you to scare off weak suitors. Let her strength and dignity do the job. —Jen Wilkin