Sarah Young’s Jesus Calling is a phenomenon that shows no signs of slowing down. According to publisher Thomas Nelson, it “continues to grow in units sold each year since it was released [and] has surpassed 15 million copies sold.” Nelson is involved in an expansive new marketing campaign that involves a new web site and daily radio devotionals. ECPA reports that “Thomas Nelson began its partnership with the Salem Media group to provide 60-second daily messages on Eric Metaxas’ show, which is carried on more than 100 stations nationwide and worldwide on SiriusXM Radio. The Jesus Calling radio devotional reaches more than 500,000 people each day through these segments.” With 15 million copies sold, it has marched its way into rare company.

Yet it is a deeply troubling book. I am going to point out 10 serious problems with Jesus Calling in the hope that you will consider and heed these warnings.

1. She speaks for God. Far and away the most troubling aspect of the book is its very premise—that Sarah Young hears from Jesus and then dutifully brings his messages to her readers. Jesus Calling makes the boldest, gutsiest, and, to my mind, most arrogant claim of any book ever to be considered Christian. The publisher describes the book in this way: “After many years of writing her own words in her prayer journal, missionary Sarah Young decided to be more attentive to the Savior’s voice and begin listening for what He was saying. So with pen in hand, she embarked on a journey that forever changed her—and many others around the world. In these powerful pages are the words and Scriptures Jesus lovingly laid on her heart. Words of reassurance, comfort, and hope. Words that have made her increasingly aware of His presence and allowed her to enjoy His peace (italics mine).” There is no way to avoid her claim that she is communicating divine revelation, a claim that raises a host of questions and concerns, not the least of which is the doctrine of Scripture alone which assures us that the Bible and the Bible alone is sufficient to guide us in all matters of faith and practice.

2. She proclaims the insufficiency of the Bible. Jesus Calling only exists because Sarah Young had a deep desire to hear from God outside of the Bible. In the introduction she describes the book’s genesis: “I began to wonder if I … could receive messages during my times of communing with God. I had been writing in prayer journals for years, but that was one-way communication: I did all the talking. I knew that God communicated with me through the Bible, but I yearned for more. Increasingly, I wanted to hear what God had to say to me personally on a given day.” In those few sentences she sets up unnecessary competition between her revelation and what we are told of the Bible in 2 Timothy 3:16-17: “All Scripture is breathed out by God and profitable for teaching, for reproof, for correction, and for training in righteousness, that the man of God may be complete, equipped for every good work.” Biblically, there is no category for what she provides as the heart and soul of her book. Biblically, there is no need for it and no reason we should expect or heed it.

3. Her deepest experience of God comes through a practice God does not endorse. Young does not only endorse her practice of listening, but goes so far as to elevate it as the chief spiritual discipline. “This practice of listening to God has increased my intimacy with Him more than any other spiritual discipline, so I want to share some of the messages I have received. In many parts of the world, Christians seem to be searching for a deeper experience of Jesus’ Presence and Peace. The messages that follow address that felt need.” Notice that her solution to addressing the desire for Jesus’ Presence and Peace is not Scripture or any other means of grace, but the very messages she provides in her book.

4. She is inspired by untrustworthy models. In early versions of Jesus Calling, Young tells of her discovery of the book God Calling and the way she modeled her practice of listening on it. She describes it as “a devotional book written by two anonymous ‘listeners.’ These women practiced waiting quietly in God’s Presence, pencils and paper in hand, recording the messages they received from Him. This little paperback became a treasure to me. It dove-tailed remarkably well with my longing to live in Jesus’ Presence.” It is worth noting that recent versions of Jesus Calling have been scrubbed of this information. God Calling is an equally troubling book that saw much success beginning in the 1930s and has seen a revival of interest in the wake of Jesus Calling. It is at times subbiblical and at other times patently unbiblical. And yet it is a book she regards as a treasure and a model for her own work.

5. She provides lesser revelation. Young admits that her revelation is different from the Bible’s (“The Bible is, of course, the only inerrant Word of God; my writings must be consistent with that unchanging standard”), but does not explain how her writings are different. Jesse Johnson says, “She does grant that the content of Jesus Calling should be measured against Scripture—but that is true of Scripture as well. In the end, there is no substantial difference in how Young expects us to view Jesus’ words to her, than how we are to view the Bible. I mean, Jesus’ words to Sarah are literally packaged into a devotional, so that we can do our devotionals from them every day.” If her words are actually from Jesus, how can they be any less authoritative or less binding than any word of Scripture?

6. She mimics occult practices. The way in which Young receives her revelation from Jesus smacks of the occult. “I decided to listen to God with pen in hand, writing down whatever I believe He was saying. I felt awkward the first time I tried this, but I received a message. It was short, biblical, and appropriate. It addressed topics that were current in my life: trust, fear, and closeness to God. I responded by writing in my prayer journal.” This is not a far cry from a practice known as “automatic writing” which Wikipedia describes as “an alleged psychic ability allowing a person to produce written words without consciously writing. The words are claimed to arise from a subconscious, spiritual or supernatural source.” Her inspiration was God Calling where it is even clearer that the authors allowed their minds to go blank at which point they supposedly received messages from God. This practice is very different from the giving of biblical revelation where God worked through the thoughts, personalities, and even research of the authors.

7. Her emphasis does not match the Bible’s. Young’s emphasis in Jesus Calling is markedly different from the emphases of the Bible. For example, she speaks seldom of sin and repentance and even less of Christ’s work on the cross. Michael Horton says, “In terms of content, the message is reducible to one point: Trust me more in daily dependence and you’ll enjoy my presence.” While this is not necessarily an unbiblical or inappropriate message, it hardly matches the thrust of the Bible which always pushes toward or flows from the gospel of Jesus Christ. Horton adds, “The first mention of Christ even dying for our sins appears on February 28 (page 61). The next reference (to wearing Christ’s robe) is August 9 (p. 232). Even the December readings focus on a general presence of Jesus in our hearts and daily lives, without anchoring it in Jesus’s person and work in history.”

8. Her tone does not match the Bible’s. It can’t be denied: The Jesus of Sarah Young sounds suspiciously like a twenty-first century, Western, middle-aged woman. If this is, indeed, Jesus speaking, we need to explain why he sounds so markedly different from the Jesus of the gospels or the Jesus of the book of Revelation. Nowhere in Scripture do we find Jesus (or his Father) speaking like this: “When your Joy in Me meets My Joy in you, there are fireworks of heavenly ecstasy.” Or again, “Wear my Love like a cloak of Light, covering you from head to toe.” And, “Bring me the sacrifice of your precious time. This creates sacred space around you—space permeated with My Presence and My Peace.” Why does Jesus suddenly speak in such different language?

9. She generates confusion. By fabricating the spiritual discipline of listening and elevating it to the first place, she generates confusion about the disciplines that God does prescribe for Christians. Michael Horton addresses this one well: “According to the Reformation stream of evangelicalism, God speaks to us in his Word (the arrow pointing down from God to us) and we speak to him in prayer (the arrow directed up to God). However, Jesus Calling confuses the direction of these arrows, blurring the distinction between God’s speech and our response.” What she models and endorses is both confusing and unhelpful.

10. Her book has been corrected. Most people don’t know that Jesus Calling has undergone revisions, not only in the introduction where she removed references to God Calling, but also in the words she claims to have received from Jesus. This, of course, casts even further doubt on the trustworthiness of the revelation she receives. After all, why would words from Jesus need to be revised? Did God lie? Did he change? Did she mis-hear him? There is no good option here, other than to doubt all she has ever claimed to receive. This comparison from CARM highlights one significant correction to the text: 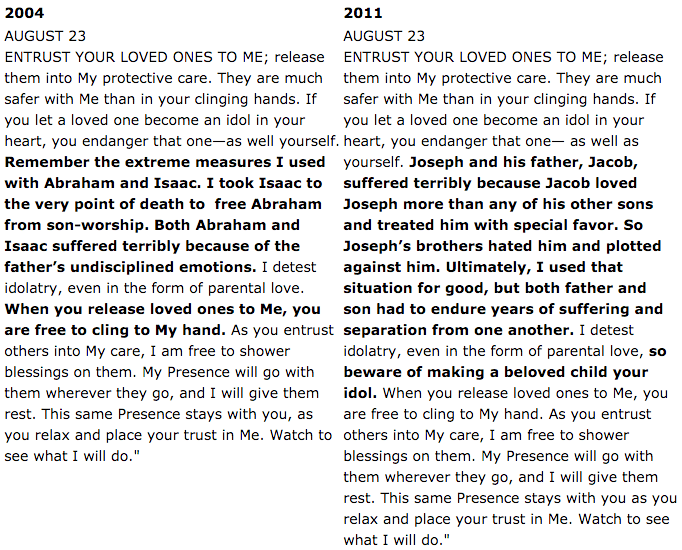 The point is clear: Jesus Calling is a book built upon a faulty premise and in that way a book that is dangerous and unworthy of our attention or affirmation. The great tragedy is that it is leading people away from God’s means of grace that are so sweet and so satisfying, if only we will accept and embrace them.