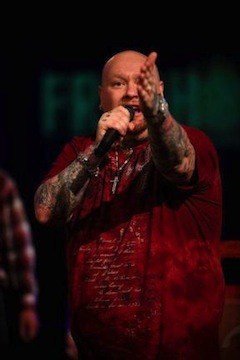 A couple of weeks ago I invested an hour and a half in watching Lakeland: The Movie, a documentary about Todd Bentley and the Lakeland “Revival.” You may remember that in April of 2008, a preacher and revivalist named Todd Bentley was invited to Ignited Church in Lakeland, Florida. The plan was to have Bentley there for five days of revival services. In the end he stayed for four months. What was meant to be a small, local event soon saw hundreds of thousands of people from 65 countries travel to Florida. Millions more participated through the Internet. Night after night Bentley would hold wild services full of singing, preaching, speaking in tongues, prayer for healing and miracles and, of course, the inevitable collection of money.

The revival was marked by what were said to be great manifestations of the work of the Holy Spirit—speaking in tongues, ecstatic prophecies, miraculous healings and even the claim that somewhere around thirty people had been raised from the dead. Just about every major media outlet covered it at one time or another. Most of them went looking for evidence that miracles had actually happened; not surprisingly, not a single miracle was ever verified.

By August the revival was beginning to slow down a little bit and Bentley decided to leave Lakeland and to take the revival on the road. Teaching that the Holy Spirit could be passed from him to others by the laying on of hands, he would tour the country and take this outpouring of the Spirit with him. But no sooner did he leave Lakeland than the media exploded with reports that Bentley and his wife would be separating. Apparently he had been carrying on an inappropriate relationship with one of the women connected to his ministry. He and his wife soon divorced and shortly afterward he had married this other woman. The revivals and his ministry came to a screeching halt, at least for a time.

This documentary made me both angry and sad. I was outraged to see Bentley’s complete disregard for Scripture, his disregard for what the Bible tells us about the miraculous gifts, about maintaining good order in services, about so much else. What made me sad were the many looks at the people who had followed Bentley. There were many people, well-intentioned, I am sure, who gave up everything they had to follow him. They sold their houses, they walked away from their normal lives, and drove down to Florida where for a time many of them even lived together in a tent city. They looked to Bentley as their leader, the one who would be ushering in an age of revival, of constant miracles and supernatural deeds. They were enraptured by him, entranced by him, as they lived in a charismatic glow of constant prayer, prophecy, speaking in tongues and unusual manifestations of the Holy Spirit.

As I watched this documentary and as I considered Todd Bentley, I realized that he is so much like every other false prophet, every other ungodly religious leader before and since. When he came to the end of his time, and end that would come in a cloud of moral scandal, he simply walked away from his followers, leaving them lost and alone. His sin, his selfishness, his departure, left these people destitute and wandering.

But then I thought of a religious leader who two thousand years before had come to the end of his ministry, and he too was about to go away. But Jesus Christ was no Todd Bentley. Jesus had to go away, he had to leave his followers behind, but he is the one leader in all of history who could rightly and truly say, “It is actually better for you if I go away. It’s better for you if my time here comes to an end.”

He said this to his most committed followers, to the disciples who had been following him since the very beginning of his ministry. These men had given up so much: They had given up time and money and comfort and vocation and esteem in the eyes of others and so much else, and all of this to follow Jesus. And then Jesus told them that he would be leaving them. We can only imagine the shock and disappointment they must have felt.

And yet Jesus could truly say, “It is better that I go.” And why could he say that? Because “I will ask the Father, and he will give you another Helper, to be with you forever, even the Spirit of truth, whom the world cannot receive, because it neither sees him nor knows him. You know him, for he dwells with you and will be in you” (John 14:16-17). If Jesus did not go, the Spirit could not come. If the Spirit did not come, he could not indwell us.

Somewhere in our minds I think we may believe that the Holy Spirit is a kind of consolation prize. We understand that Jesus had to die and maybe we even understand why Jesus then had to ascend to the Father’s side. But still we find ourselves thinking that since he couldn’t be here anymore he left us a kind of deputy, a substitute teacher, an interim pastor, someone who is good enough but not quite the one we want. But Jesus never frames it like that. He says that you and I are better provided for with the presence of the Holy Spirit than if Jesus himself were still here. Jesus provided with a fullness, with an extravagence, that no other religious leader ever has or ever will.

For a limited time you can watch the complete Lakeland: The Movie on YouTube (this is on the official YouTube channel of the filmmaker):