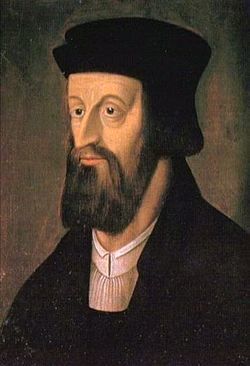 Here is a pastoral conundrum for you to think about. In 1412 the pre-Reformation preacher John Huss found himself facing a difficult decision. The Roman Catholic Church had excommunicated him for his refusal to burn his copies of John Wycliffe’s writings and now the Church had also leveled an interdict against the city of Prague on his account. This was a scare tactic that meant that for as long as he was in the city, no sacraments could be administered there. According to Roman Catholic theology, the interdict put the whole city at risk of losing their salvation. It placed extreme pressure on Huss to decide whether he would flee his congregation and see the interdict lifted, or whether he would stay and, in all likelihood, face death.

In a letter to friends, Huss processed his thoughts on the matter, ultimately concluding with counsel from St. Augustine (that had, of course, been penned many, many years earlier).

I burn with ardent zeal for the gospel; and my soul is sad, for I know not what to resolve on. I have meditated on these evangelic words of our Savior (John, chap. x.) — “The good shepherd giveth his life for the sheep. But he that is an hireling and not the shepherd, whose own the sheep are not, seeth the wolf coming, and leaveth the sheep and fleeth: and the wolf catcheth them and scattereth the sheep.”

I have also meditated on these words from St Matthew (chap. x.) — “But when they persecute you in one city, flee ye into another.” Of these two precepts, so different to each other, which ought I to follow? I know not. …

Therefore, let us pray humbly to Almighty God, that he may deign to reveal to us what I ought to do in the present circumstance, in order that I may dwell in the right way. The advice that the blessed St. Augustine expresses in his letter, is wise: he establishes in fact, that in circumstances where we may be anxious for ourselves alone, flight is permitted, and he cites on the point the example of St. Athanasius; but should the whole flock be exposed, we must resign ourselves to our lot, in order to do what may prove most useful to the Church. (Letters of John Huss, 19-21)

Augustine’s counsel was that a pastor could, in good conscience, leave his congregation as long as his departure would not expose the sheep to wolves. However, if it was likely that his departure would leave the sheep vulnerable to attack, out of love for his flock he should stay and endure whatever might come. This strikes me as a wise way of breaking down with a difficult situation.

Huss ultimately did leave Prague, convinced that his people would be cared for even without him. Until his martyrdom in 1415, he visited the city whenever he could and wrote numerous pastoral letters to the congregation.