Avoiding Kids: How Men Cope With Being Cast as Predators 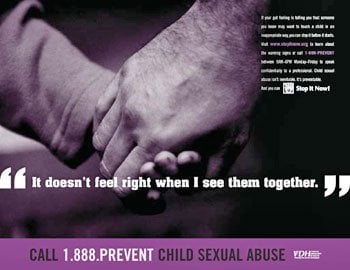 Ted Wallis, a doctor in Austin, Texas, recently came upon a lost child in tears in a mall. His first instinct was to help, but he feared people might consider him a predator. He walked away. ‘Being male,’ he explains, ‘I am guilty until proven innocent.'” As awful as it sounds, I sympathize with this guy. As terrible as it might be to see a young child lost and alone, as a man in this society I feel like accusing eyes would be upon me were I to walk up to that child and offer to help. My instinct would probably be to look for an authority figure–a police officer or mall security guard–or a harmless-looking stranger, perhaps an elderly woman or a pregnant mom. These people could help the child without making others assume that they have evil ulterior motives.

Jeff Zaslow of the Wall Street Journal has written a couple of recent articles dealing with our society’s view of men as predators. They are well worth reading (Are We Teaching Our Kids To Be Fearful of Men? and Avoiding Kids: How Men Cope With Being Cast as Predators). He asks, “Are we teaching children that men are out to hurt them? The answer, on many fronts, is yes. Child advocate John Walsh advises parents to never hire a male babysitter. Airlines are placing unaccompanied minors with female passengers rather than male passengers. Soccer leagues are telling male coaches not to touch players.” An ad campaign for Virginia’s Department of Health features a picture of a man’s hand holding a child’s hand with these words plastered over it: “It doesn’t feel right when I see them together.” The message seems clear. “The implication is that if you see a man holding a girl’s hand, he’s probably a predator,” according to Marc Rudov who runs a father’s rights site.

Clearly there are going to be consequences to making people (and children in particular) fearful of men. “Fathers’ rights activists and educators now argue that an inflated predator panic is damaging men’s relationships with kids. Some men are opting not to get involved with children at all, which partly explains why many youth groups can’t find male leaders, and why just 9% of elementary-school teachers are male, down from 18% in 1981.” Children are beginning to be distrustful of men and society in general is becoming increasingly distrustful of men. Men, meanwhile, bear the weight of feeling like they are always on the edge of being accused of some deviant behavior. “The result of all this hyper-carefulness, however, is that men often feel like untouchables.” “While we don’t want sexual predators to harm our kids, we do want our kids to develop healthy relationships with adults, both men and women. Instilling a fear of men is a profound disservice to everyone.”

Here are a few examples of how this is working itself out according to the testimonies of men who responded to Zaslow’s articles:

In Cochranville, Pa., Ray Simpson, a bus driver, says that he used to have 30 kids stop at his house on Halloween. But after his divorce, with people knowing he was a man living alone, he had zero visitors. “I felt like crying at the end of the evening,” he says.

At Houston Intercontinental Airport, businessman Mitch Reifel was having a meal with his 5-year-old daughter when a policeman showed up to question him. A passerby had reported his interactions with the child seemed “suspicious.”

In Skokie, Ill., Steve Frederick says the director of his son’s day-care center called him in to reprimand him for “inappropriately touching the children.” “I was shocked,” he says. “Whatever did she mean?” She was referring to him reading stories with his son and other kids on his lap. A parent had panicked when her child mentioned sitting on a man’s lap.

I’ll admit that I am of two minds about this. On the one hand I don’t want to feel (and don’t want my children to feel) that all men are perverts who are necessarily untrustworthy. At the same time, I have too often seen the harm done to children through predatory men. Though it may be the case that only the smallest percentage of men are predators, the fact remains that the great majority of predators are men. Early on in our marriage my wife and I established a couple of ground rules pertaining to our children (such as not allowing men or boys to babysit our children and being exceedingly cautious about sleep-overs). To use these seemed like common sense rules and not ones born out of a great fear of all men. We are cautious towards relationships between our children and other men, but rejoice when godly or otherwise concerned adults show a genuine interest in them.

I would be interested in hearing from the people who read this site to hear how you cope with these situations.