A few years ago I was at a conference to lead a breakout session and perhaps to do some writing about the event. There were a couple of keynote speakers there, John Piper among them, and they were carrying a much heavier load. If I remember correctly, the first day ended with an informal Q&A session held in the lobby rather than the main auditorium. Hundreds of us crowded into that lobby to eat dessert and to hear answers to interesting questions.

As the evening was coasting toward its conclusion, someone tapped me on the shoulder and said, “Would you like to get some guacamole with John Piper after we’re done here?” Now, if there is any rule governing this Reformed resurgence, it’s that when John Piper asks you out for guacamole, you cannot refuse. Sure enough, a few minutes later I found myself at a nearby Chili’s with Piper and a plate of guac.

I was happy to oblige, of course, but naturally, found myself wondering why I was there. The explanation was not long in coming: Piper had recently encountered Twitter and had seen some promise in it. He was convinced that it could be an important medium for ministry. He had even begun a secret account and had been using it anonymously, teaching himself how to make the most of the 140-character word limit. He had a number of questions for me, all of them related to the strengths and the weaknesses of what at that time was a new medium. I do not remember all that we discussed, but I do remember coming away impressed with his desire to weigh the risks against the benefits and to ensure he would avoid the one while enjoying the other. He meant to make Twitter a first foray into the world of social media with the hope that it would become an important extension of his ministry.

Sure enough, he soon opened a public account and tweeted his first tweet just about 7 years ago. Today nearly 850,000 people follow him. He largely shares Scripture, sometimes with a miniature reflection attached, but also includes a few quotes and links to helpful resources. By my assessment he does Twitter well. He does it as a form of ministry.

I hadn’t thought about this incident in many years, but it came to mind on Sunday. I was at a nearby church teaching an adult Sunday school class about life in a digital world and was asked a question like this: “You’ve told us that any new technology brings with it both opportunities and risks. How can we make sure that we are properly assessing a new technology so we can avoid the risks?” And it was right then that I thought of Chili’s, guacamole, and @JohnPiper. He understood that there would be ways to use this new technology well and ways to use it poorly. His concern was to use it well, knowing that using it poorly could have a detrimental impact on his ministry and, even worse, on the gospel. In order to use it well he first tried it privately and then consulted others about it (I was not the only one he spoke to). He moved slowly and deliberately and, in that way, serves as a good model.

Do you want to use new technologies well? Then move slowly enough to first understand them, try them in small ways before committing to them in big and public ways, and ask others to share their experiences. In these ways you are making the effort to understand both the obvious benefits and the far more subtle risks.

(An amusing little event happened the same week. I was in a room by myself, putting the finishing touches on that breakout session. Suddenly the door blew open and Alistair Begg burst through it. He pointed at me and shouted, “I will…not…tweet. Ever!” Then he walked back out. I have not spoken to him before or since. But you can now follow him at @AlistairBegg.) 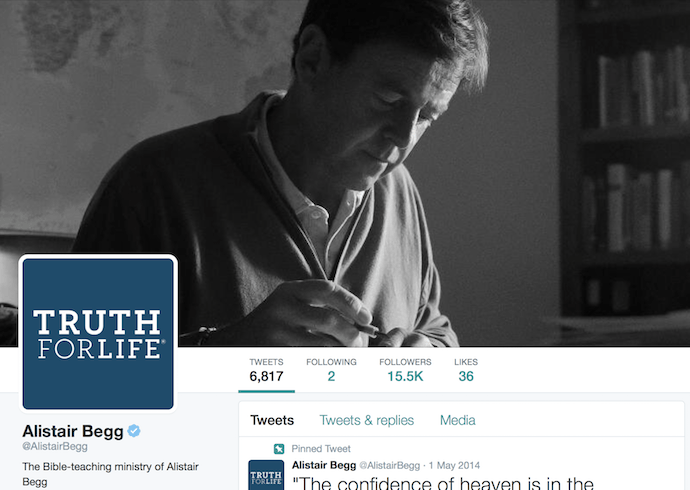