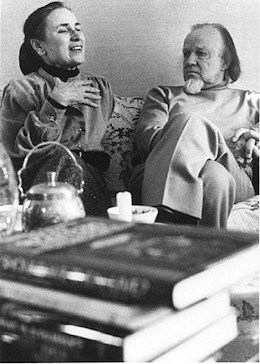 Edith Schaeffer (nee Seville) has gone to be with the Lord at the age of 98. She was born on November 3, 1914 in Wenzhou, China, the child of missionaries associated with China Inland Missions. As a young adult she attended Beaver College in Glenside, Pennsylvania and it was there that she met Francis Schaeffer. The two were married in 1935. Francis subsequently attended Westminster Theological Seminary and went on to pastorates in Pennsylvania and Missouri.

In 1948 the Independent Board for Presbyterian Foreign Missions sent the Schaeffers to Switzerland as missionaries. In 1955, after identifying significant disagreements with IBPFM and subsequently withdrawing from that organization, they decided to simply open up their home and make it available as a place to demonstrate God’s love and provide a forum for discussing God and the meaning of life. They called it L’Abri after the French word for “shelter.” By the mid-1950’s up to 30 people each week were visiting.

Edith had an integral role in maintaining the home and mentoring those who visited. She wrote or co-wrote twenty books, including Affliction, a book on suffering, and the autobiographical The Tapestry: the Life and Times of Francis and Edith Schaeffer, each of which received the Gold Medallion Award from the Evangelical Christian Publishers Association (in 1979 and 1982 respectively).

My parents were among the many young people who spent time at L’Abri. I will leave it to my mother to fill in the details.

I think I have told you before of my first encounter with Edith Schaeffer, but I would like to do so again. It was the summer of 1972 and John and I were enroute to Toronto, via Geneva, after several weeks in Florence. We decided to travel into the mountains and visit L’Abri on our way home. We were barely converted, and were already trying to sort out various systems of theology. This seemed a good opportunity to investigate the Reformed alternative.

We traveled up the mountain and got off the bus right in front of the Schaeffers’ door. Within a few minutes, Edith had introduced herself to us, and invited us to Sunday lunch. I was amazed that she had time for us, that she truly seemed interested in us in the brief minutes we had with her. But she truly won my heart with the following little incident.

During our time in Florence we had met a young man who had just come from L’Abri. He assured us that Francis Schaeffer had told him confidentially that he did not believe men exercised their will truly and responsibly. God’s sovereignty overrode that. I outlined what he had said to Mrs. Schaeffer. She just shook her head, and called upstairs, “Fran, listen to what that dingbat, Bob, told these two.” I loved her on the spot. She was real!

Within the next few years I read most of her books and grew to love her more and more. She taught me about the beauty of home and family. She modeled the wonderful and powerful virtues of Christian hospitality. And she was a good theologian in her own right.

I think her “Bird’s Eye View of the Bible” is unequalled in its concise and user-friendly presentation of biblical theology. Her longer version of the same, Christianity is Jewish, is one of the most helpful books i have ever read. In other words, she and her husband presented the gospel by starting at the beginning of God’s truth–in Genesis–and following the story through to its end (and new beginning) in Revelation. I am convinced that, along with their own winsomeness, that is the reason so many people were converted under their ministry. Did they seek to take captive and destroy worldly intellectual strongholds? Yes, certainly. But always in order to make way for that beautiful gospel she–they–then presented so magnificently and simply.

So, what can I say? I am in her debt now and forever. She was a faithful Mother in Israel and I am one of many rising up and calling her blessed.

If you haven’t ever read a biography of the Schaeffer’s, let me suggest that you do so now. Francis and Edith Schaeffer by L.G. Parkhurst is written for a young audience and is just $3.99 for Kindle; so too is the Bite-Size Biography by Mostyn Roberts. Colin Duriez’s Francis Schaeffer: An Authentic Life is an excellent longer work.

You can read Frank Schaeffer’s farewell to his mother here.