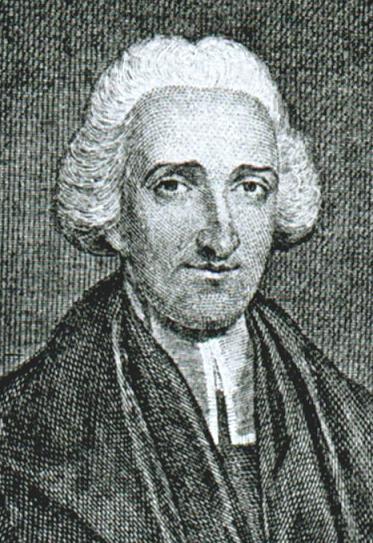 Augustus Toplady was born in England in 1740. His father was a Royal Marine and died on duty soon after his son’s birth, leaving the boy to be raised by his mother. Toplady had an interest in religion during his younger years, and showed this in spiritual journals and moralistic behavior. However, it wasn’t until his fifteenth year, while attending a Methodist revival in an Irish barn, that he felt “brought nigh to God.” It was at this point that he determined to go into ministry.

Having been converted under Methodism, Toplady initially aimed to become a Methodist minister. This changed, however, when he began to consider more closely the distinctions between Arminianism and Calvinism. The Methodist movement was decidedly Arminian, and Toplady, as an offspring of that movement, initially adopted that understanding. But, as Louis Benson writes, after he studied the 39 Articles of the Church of England, he became convinced of the Calvinistic perspective and thus became a minister in the Church of England.

The issue of Calvinism versus Arminianism was a hot topic in the church in those days, and for the remainder of his life Toplady would write and debate on the subject, arguing at length (and at times viciously) for the doctrine of election. Unfortunately, towards the end of his short life, the debate grew increasingly ugly, resulting in a major and public rift between him and John Wesley that would never find resolution.

Toplady died in 1778 (aged 38) from tuberculosis. He never married, his life and ministry were short, and he certainly had his share of flaws. But God was pleased to use him to write a hymn that would so powerfully communicate the gospel and encourage the saints that his name and story have been preserved to this day.

Toplady wrote a number of hymns in his life, but “Rock of Ages” is by far his most famous. When Benson wrote about it in 1923, he claimed it “is to-day in more church hymnals than is any other English hymn.” Not only is it well know among churchgoers, but it is also recognizable in popular culture. A 2006 Broadway musical about rock ‘n roll (and a corresponding Hollywood film in 2012) adopted the name “Rock of Ages.”

As for the hymn, the first stanza appeared in public in 1775 in a periodical called The Gospel Magazine (a periodical which, incredibly, is still in print!). The full version of the hymn was printed the following year in Toplady’s book Psalms and Hymns for Public and Private Worship. 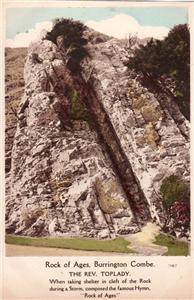 There is a common story of the hymn being inspired by (and even written from within) a rock cleft that Toplady once took refuge in during a storm. The particular rock is in Burrington Combe gorge in North Somerset, England, and it has a plaque on it with this claim to fame. However, the story is probably apocryphal.

As Benson persuasively argues, Toplady was most likely inspired to write the hymn after reading the preface of John and Charles Wesleys’ Hymns on the Lord’s Supper (1745) which contains a prayer voicing many of the themes and words that are also found in the hymn. This is ironic, given the poor condition of Toplady’s relationship with John Wesley; but one can perhaps see the hand of God in it.

Regardless of where and how Toplady got his inspiration, the hymn is a blessing. For generations it has remained a solid testimony to the powerful sacrifice of our Savior and a great encouragement to saints around the world. May God continue its influence, and grant us many more songs with such enduring legacies.

Rock of Ages, cleft for me,
let me hide myself in thee;
let the water and the blood,
from thy wounded side which flowed,
be of sin the double cure;
save from wrath and make me pure.

Not the labors of my hands
can fulfill thy law’s commands;
could my zeal no respite know,
could my tears forever flow,
all for sin could not atone;
thou must save, and thou alone.

Nothing in my hand I bring,
simply to the cross I cling;
naked, come to thee for dress;
helpless, look to thee for grace;
foul, I to the fountain fly;
wash me, Savior, or I die.

While I draw this fleeting breath,
when mine eyes shall close in death,
when I soar to worlds unknown,
see thee on thy judgment throne,
Rock of Ages, cleft for me,
let me hide myself in thee.