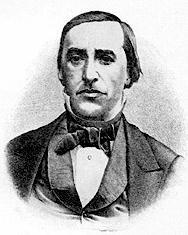 Few of the hymns I have covered in this series were written in connection to particular events that occurred in their authors’ lives. “Stand Up, Stand Up for Jesus” is an exception as it was composed in the aftermath of the untimely death of the author’s beloved friend.

In the spring of 1858 revival was taking place in Philadelphia. The movement grew out of midday prayer meetings coordinated by the Young Men’s Christian Association (YMCA). Rev. Dudley A. Tyng, a young Episcopalian minister, soon came to be recognized as its leader. Though there was some controversy over his anti-slavery preaching, Tyng was known and loved for his zeal for the work of God. Among the interdenominational leaders who gathered around him was the Presbyterian minister George Duffield, Jr.

On Tuesday, April 13th, 1858, Rev. Tyng was studying at his country home when he went to the barn to check on his mule which was driving a machine that shelled corn. As he patted down the animal, the sleeve of his gown got caught in the cogs of the machine, and his arm was severely injured. The the arm was soon amputed, the wound became mortal, and Tyng died the following week.

Before he died, however, he was asked by friends if there were any messages he would have them give to those who had participated with him in the revival work. Tyng responded briefly, beginning with the words, “Tell them, ‘Let us all stand up for Jesus.'”

In the days and events following Tyng’s death, these final words were invoked several times and became a resounding exhortation to all who had been affected by his ministry. When George Duffield, Jr. preached to his own congregation the next week, he focused on Ephesians 6:14 (“Stand therefore, having fastened on the belt of truth…”) and concluded his sermon with a hymn he had written. It began with the line, “Stand up, stand up for Jesus.” The hymn was soon picked up by Presbyterian and Congregationalist publishers, and it quickly became an established work.

Similar to “Onward Christian Soldiers,” it became popular among soldiers of the Civil War, most likely because of its militaristic imagery and language. But, as we noted with that hymn, the connection to worldy battles was not the author’s intent; Christians have often sung soldier songs, because, as God tells us in Ephesians 6 and elsewhere, our lives in Christ are a fight for faith in the midst of spiritual enemies. We are called to stand in the strength he supplies.

Stand up, stand up for Jesus, ye soldiers of the cross;
Lift high His royal banner, it must not suffer loss.
From victory unto victory His army shall He lead,
Till every foe is vanquished, and Christ is Lord indeed.

Stand up, stand up for Jesus, the solemn watchword hear;
If while ye sleep He suffers, away with shame and fear;
Where’er ye meet with evil, within you or without,
Charge for the God of battles, and put the foe to rout.

Stand up, stand up for Jesus, the trumpet call obey;
Forth to the mighty conflict, in this His glorious day.
Ye that are brave now serve Him against unnumbered foes;
Let courage rise with danger, and strength to strength oppose.

Stand up, stand up for Jesus, stand in His strength alone;
The arm of flesh will fail you, ye dare not trust your own.
Put on the Gospel armor, each piece put on with prayer;
Where duty calls or danger, be never wanting there.

Stand up, stand up for Jesus, each soldier to his post,
Close up the broken column, and shout through all the host:
Make good the loss so heavy, in those that still remain,
And prove to all around you that death itself is gain.

Stand up, stand up for Jesus, the strife will not be long;
This day the noise of battle, the next the victor’s song.
To those who vanquish evil a crown of life shall be;
They with the King of Glory shall reign eternally.

(I have one delightfully awkward memory of this hymn. We occasionally sang this song in a church I attended many years ago; one Sunday we sang it but it was during a part of the service where we all sat. Everyone was wondering how we could sing “Stand up for Jesus” when we were all instructed by the bulletin to sit; finally one brave lady stood up and the rest of us soon joined her.)