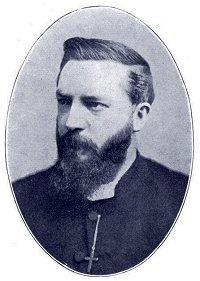 Songs are a powerful means of teaching. The melodies, rhythms, and rhymes that characterize songs make the words easier to remember. The best and most effective songs combine lyrics and music to cultivate feelings that complement the meaning.

All throughout history God’s people have used songs to teach. We can see this as early as Exodus 15 where Moses records the song Israel sang after crossing the Red Sea. It taught everyone who heard and sang it about God’s character in that great act of delivering his people. In the New Testament we encounter simple but important truths in the earliest Christian hymns.

The Rev. Samuel John Stone was well aware of the effectiveness of singing when he wrote and published Lyra Fidelium in 1866. As a curate in the small town of Windsor, England, he was aware of his parishoners’ habit of using the Apostles’ Creed in their private prayers. But he was concerned that many of them did not grasp the meaning of what they said. The prose felt too academic, disconnected from the average worshipper, and lacking a devotional spirit.

It was in this context that he wrote Lyra Fidelium, which consisted of twelve hymns, one for each article of the Apostles’ Creed. With each hymn he included a short “summary of truths confessed” in that article, along with a list of the Scripture passages supporting it. “The Church’s One Foundation” was the hymn he wrote for article 9 of the Creed, which affirms belief in “the holy catholic church” and “the communion of saints.”

“The Church’s One Foundation” is the best known of the twelve hymns in this collection. Louis Benson quotes one English archbishop as saying that “wherever he was called upon to open or dedicate a church, he could always count on two things—cold chicken and ‘The Church’s one Foundation’.”

The hymn’s long legacy undoubtedly owes to the many sweet doctrines it includes, its use of the words and concepts of Scripture to express them, and its uniqueness in teaching the doctrine of the church. Benson describes it as embodying “practically every doctrince concerning the church [Stone] held most dear (its divine origin, its unbroken continuity, its catholicity and essential unity, its orthodoxy, its sacramental grace, its communion with God and with the departed saints, its militancy and final triumph).”

The Church’s one foundation
Is Jesus Christ her Lord,
She is His new creation
By water and the Word.
From heaven He came and sought her
To be His holy bride;
With His own blood He bought her
And for her life He died.

She is from every nation,
Yet one o’er all the earth;
Her charter of salvation,
One Lord, one faith, one birth;
One holy Name she blesses,
Partakes one holy food,
And to one hope she presses,
With every grace endued.

The Church shall never perish!
Her dear Lord to defend,
To guide, sustain, and cherish,
Is with her to the end:
Though there be those who hate her,
And false sons in her pale,
Against both foe or traitor
She ever shall prevail.

Though with a scornful wonder
Men see her sore oppressed,
By schisms rent asunder,
By heresies distressed:
Yet saints their watch are keeping,
Their cry goes up, “How long?”
And soon the night of weeping
Shall be the morn of song!

’Mid toil and tribulation,
And tumult of her war,
She waits the consummation
Of peace forevermore;
Till, with the vision glorious,
Her longing eyes are blest,
And the great Church victorious
Shall be the Church at rest.

Yet she on earth hath union
With God the Three in One,
And mystic sweet communion
With those whose rest is won,
With all her sons and daughters
Who, by the Master’s hand
Led through the deathly waters,
Repose in Eden land.

O happy ones and holy!
Lord, give us grace that we
Like them, the meek and lowly,
On high may dwell with Thee:
There, past the border mountains,
Where in sweet vales the Bride
With Thee by living fountains
Forever shall abide!

Indelible Grace has a recording of the song set to a new melody and they are offering it to you for free. You can visit NoiseTrade to get it. There is the option there to leave a tip, but feel completely freedom to take the song for free.