A couple of weeks ago Dr. Mohler supplied a suggested summer reading list. My tastes and Dr. Mohler’s run pretty much the same when it comes to recreational reading so I thought I’d go ahead and just read this entire list of ten books. I’m now forty percent of the way through (math wizzes will do the math and figure out that this means I’ve read four of the ten) and thought I’d report in. 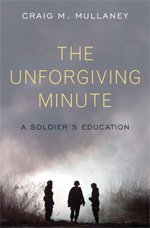 First up was The Unforgiving Minute by Craig Mullaney. Mohler says “The Unforgiving Minute is in account that mixes courage with intelligence and deep patriotic commitment with a reflective mind. This book is an account of education, growth into manhood, and the demands of leadership. It unites the intensity of battle with the anguished thoughts of a young man who desperately wants to be worthy of the trust invested in him.” I found it a fascinating read and one that was atypical for war memoirs (of which I’ve read many). Mullaney is both a jock and an intellectual, a guy who is as comfortable in the halls of academia (he was a Rhodes scholar) as he is in the wrestling ring (where he was quite an accomplished athlete). He is far from a Texas Republican (like the authors of many of the memoirs I’ve read) and yet he’s also not quite the Rhode Island liberal we might (unfairly) expect for a guy who is part of the Obama-Biden Transition Team. He offers a poignant look at coming of age on the battlefield that is reminiscent of the similar memoirs of men like Eugene Sledge and Erich Maria Remarque, to whom he is clearly indebted. Forewarned is forearmed and, as Mohler noted, there is a little bit of profanity in this book, though it is mostly descriptive and happens on battlefields (where, by all accounts, there tends to be a fair bit of profanity). If you are interested in war memoirs, this one is a must-read. 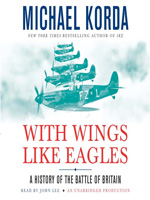 Next up was Michael Korda’s With Wings Like Eages. I’ve always had a deep fascination with the Battle of Britain (which probably began the day I saw the movie of that name) and read this book like it was a spy thriller. Mohler says “With Wings Like Eagles is an accurate and well-written account that takes the reader into the drama of those days and the lives of the pilots. Korda places the Battle of Britain within the larger context of the war and, in the end, makes clear that, had Britain fallen, the world we know would be a remarkably different place.” It is, indeed, both accurate and well-written. It is also perfectly-paced, never getting bogged down in the details. It is deep enough to give a good sense of the ebb and flow of the battle, but not so deep that it becomes inaccessible. If I was forced to come up with a negative for this book, I’d point to the author’s esteem, and perhaps even over-esteem, for Air Chief Marshal Hugh Dowding. In fact, in many places the book reads almost like a biography of Dowding. While his importance to the battle and to the eventual Allied victory in the Second World War has long been under-appreciated, Korda may be just a little bit too positive toward his hero. Nevertheless, this is a very good book and one that describes an exceedingly important battle that without doubt changed the world. 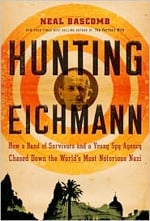 The third book I read was Hunting Eichmann by Neal Bascomb. The book describes how a group of survivors along with a fledgling spy agency hunted down the man who engineered much of the Holocaust. And, of course, they quickly brought him to justice in a moment that was pivotal in Israeli history and in Israeli self-identity. Mohler says “Bascomb has written the only full account of Eichmann’s capture and its aftermath. He tells the story with great skill, and he sets the record straight on a number of questions. The most interesting fact about the search for Adolf Eichmann in the years after World War II is the fact that he was not even on the top list of wanted Nazi criminals at the war’s end. Eichmann’s central role in administering the “Final Solution” and the murder of millions of Jews in Germany and central Europe became evident only in the years after the war.” This is a book that reads like a novel, or close to it, in any case. It reminded me a fair bit of James Swanson’s Manhunt which also described the historical account of hunting down a notorious killer (and which is also well worth the read). Like that book, I couldn’t put it down until I had read the last page. I knew little about Eichmann and even less about his life after the war, his capture and his trial. This book provided the facts on all of these matters and did so in a fast-paced, compelling way. 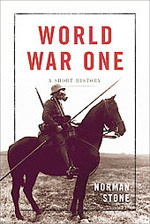 Finally, just this morning I finished World War One: A Short History by Norman Stone. Mohler says “Without flinching, Stone tells the story of the hubris and insane optimism that brought Europe into this disaster and he recounts the blunders and grinding murderousness of this war. Most Americans want to know more about World War I and, most importantly, they want to understand what that war meant. World War One: A Short History is a great place to find those questions answered.” It is difficult to do justice to as great an event as the First World War in only 180 pages, but Stone does as well as we could hope. He does particularly well in describing the causes of the war and in showing at the end of his narrative how this war was really the prelude for the even greater, even more costly Second World War. Though it is relatively easy to read, it can be a little bit difficult to follow simply because so much had to be left out so this could be, as it claims, a short history. Still, anyone who is eager to read a brief overview of the War, or anyone who seeks to understand some of the background to the Second War, would do well to read this book.

That brings me to four out of ten. For Father’s Day I’ve requested three more from the list: Sultana, The Third Reich at War (which, based on its size, is clearly going to be a challenge) and Horse Soldiers. That will leave me with Masters and Commanders, Maverick Military Leaders and For the Thrill of It. Speaking of which, for the thrill of it, I also picked up the novel City of Thieves which Mohler also recently recommended. It’s going to be a busy summer. I’ll check in again when I’ve scratched a few more off my list.

One more quick note. While browsing the shelves of my local bookstore a short time ago, I came across What I Read, a little reading journal. It simply offers a place to record the books you’ve read along with a few brief comments about them. I’ve quite enjoyed using the journal and think it would make a perfect gift for any reader. So take a look and consider getting one for anyone you know who loves to read. They’ll love it.