Every couple of summers my whole family vacations together. When I say “my whole family,” I mean my parents, their 5 children, their 4 children-in-law, and a small hoard of grandchildren. That’s a crowd of 26 people all told. Needless to say, we have to search far and wide to find accommodations for that many people—accommodations that offer the right balance of luxury versus economy, community versus privacy, and so on. Typically our search leads us to an American state park where we can each rent a cabin of our own while still setting up in the same vicinity. This year, though, we decided to meet up here in Canada and found a collection of cottages clustered together on one property. It seemed a near-perfect solution. It turned out to be, well, far from perfect. While I will never actually post this review, merely writing it over the course of the week has proven its own form of therapy. Here goes…

This week we rented all 5 cottages to host a family-wide vacation. Our experience was disappointing and at times full-out exasperating. Let me begin with an item I brought to the owner’s attention on the very first day: the oven in cottage #4.

When we rented the cottage, we assumed that the claim of a full kitchen indicated that a kitchen was not only present, but also functional. Perhaps this was our naïveté and it was incumbent on us to verify details like “Does the oven get hot inside?”

(Likewise, I suppose we should have verified that the toilets in these cottages would be capable of flushing without the assistance of a bucket of water, but caveat emptor, right? Plus, wouldn’t it have felt condescending to ask, “Can you please verify that the toilets flush?” There are some things you feel you should be safe assuming. But back to the subject at hand.)

Now, had we been told the oven was non-functional or, indeed, that there was no oven at all, we would have planned our meals differently. As it stands, though, we planned to use the oven often and were rather inconvenienced by its inability to so much as turn on. I should mention that one evening we attempted to use the barbecue in place of the oven but, wouldn’t you know it, it immediately ran out of propane. Thankfully my sister and her family hadn’t yet shown up so we were able to surreptitiously purloin their tank which, I confess, didn’t help them to get off to a good start either.

But enough about the oven. Let’s talk about bugs. Obviously the owner bears no responsibility for the outdoor insects and we came well-prepared to combat them. This is, after all, eastern Ontario in mid-summer and mosquitos, black flies, and other predatory bugs abound. But indoor bugs are a different matter altogether. One night my niece wandered into her parents’ bedroom to complain that her bed was covered in black bugs. Assuming she had been dreaming—she does have an active imagination—, they sent her back to bed. But then she came in a second time to say the bugs were now biting her. This was early enough in the week that there was still some optimism in our minds, so I can excuse her parents for doubting her tale. Yet sure enough, in the morning her bed was swarming with hundreds of big black ants and she was covered in bites. Maybe this is the first time this has ever happened in that cabin, but judging by the well-established ant holes we discovered when we pulled back the bed, we rather doubt it.

I want to circle back to the plumbing. I understand that the property is on a well and has no access to the convenience of city water. I understand that it has been a dry summer and that the water tables are a little bit low. But the water situation here does strike me as both odd and inconsistent. We could never cajole more than a lukewarm trickle out of our kitchen sink but found an untamable torrent in the bathroom. Yet somehow the toilet in our cottage—and in 2 of 4 others—filled insufficiently to generate more than the barest hint of a flush. It was recommended that we try a bucket of water with each flush (on a buckets-not-provided basis). We recommended a plumber and, despite repair attempts, still do.

There is so much more we could discuss: The trash cans that are little more than raccoon feeders and were knocked over and ravaged every…single…night; the toaster that was capable of toasting only the lower half of one side of a slice of bread leading to toast that was, miraculously, simultaneously burnt and frozen; the contact number that went unanswered so that when the electricity went out, we had to diagnose the problem, drive to town, buy some fuses, and fix it ourselves; the toilet seat that was resting on the toilet but affixed to it in only a token way; the doorknob that, likewise, was inserted but not secured, trapping people in the bedroom. And this was just my experience—each of my siblings has their own unique tale of woe like finding the Kleenex box stuffed full of used tissues, of finding their bed littered with crumbs, of opening the box we had been told contained an emergency phone to find it actually contained only a take-out menu.

See, it’s not that we are opposed to making do without such conveniences as electricity and running water. After all, humanity thrived without these things for millennia. Even today people voluntarily give them up to enjoy camping and, indeed, camping can be lots of fun. The fact is, though, that we showed up prepared for cottaging, not camping. It’s all in how you present it, right? And it’s all in what you’ve paid for.

I understand that these cottages are a work in progress. I understand that it’s hard to make a go of it with seasonal rental properties. I’m not unsympathetic to the owner’s struggles. I only wish that his website had been clear that the descriptions more accurately described his vision for the place than the much more modest reality.

Still, in one area he didn’t let us down. The website promised that we would enjoy spectacular views. There was, indeed, one that was especially sweet and very nearly moved me to tears—the sight of the property finally disappearing in my rear-view mirror as we headed back to the city 2 days early.

Despite all of this—and I neither fabricated nor exaggerated any details—we had a good time with my family and the host of cousins and friends who dropped in along the way. While the cottages themselves were subpar, the property was just fine and we enjoyed sitting outside, swimming in the lake, and visiting nearby villages. Most of all we enjoyed one another (outdoors). We do not believe this was a case of evil intent as much as a case of a well-meaning landlord who acquired a problematic property and is just trying to keep up. Over the course of the week, and in response to our insistence, he began to correct, or attempt to correct, some of the most glaring issues. In the end, the oven, the plumbing, the ants, the whole situation—these are all things I’m sure we will laugh about next summer when we are staying somewhere—anywhere—else. 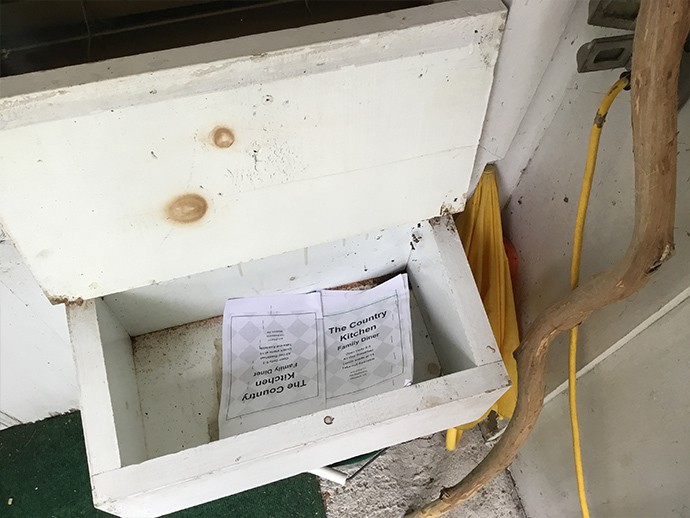