A short time ago I launched a new Sunday series called “The Bestsellers.” The Evangelical Christian Publishers Association tracks sales of Christian books, and awards the Platinum Book Award for books whose sales exceed one million, and the Diamond Book Award for sales exceeding ten million. In this series I will look at the history and impact of some of the Christian books that have sold more than a million copies—no small feat when the average Christian books sells only a few thousand. We will encounter books by a cast of characters ranging from Joshua Harris, Randy Alcorn and David Platt all the way to Joel Osteen, Bruce Wilkinson and William Young. So far we have looked at titles awarded Platinum status in 2005 and 2007; today we advance to 2008 and a book that served as the voice of a generation. 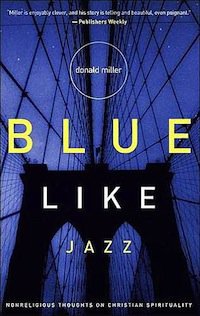 Donald Miller was born in 1971 and grew up in Houston, Texas. He left home at twenty-one and traveled across the country until he ran out of money in Portland, Oregon, and decided to remain there. In 2000 Harvest House Publishers published his first book, Prayer and the Art of Volkswagen Maintenance, which told the story of his cross-country journey. The book made minimal impact until it was retitled Through Painted Deserts and re-released in 2005, following the breakthrough success of his second book.

Two years after Prayer and the Art of Volkswagen Maintenance, while auditing classes at Reed College in Portland, Miller wrote Blue Like Jazz: Non-Religious Thoughts on Christian Spirituality. It was published in 2003 by Thomas Nelson. Sales were slow at first, but they soon picked up, and eventually the book would make its way to the New York Times list of bestsellers. It would prove to have mass appeal both for what Miller said and for the way he said it.

Blue Like Jazz is a spiritual memoir, a semi-autobiographical account of Miller’s spiritual transformation. The catchy title is borrowed from the world of jazz and the characteristic freedom and ambiguity of that musical genre. “I was watching BET one night, and they were interviewing a man about jazz music. He said jazz music was invented by the first generation out of slavery. I thought that was beautiful because, while it is music, it is very hard to put on paper; it is so much more a language of the soul … The first generation out of slavery invented jazz music. It is a music birthed out of freedom. And that is the closest thing I know to Christian spirituality. A music birthed out of freedom. Everybody sings their song the way they feel it, everybody closes their eyes and lifts up their hands.”

Miller had been raised with a kind of cultural Christianity and had been tempted to walk away from it all together, thinking that Christianity was necessarily synonymous with fundamentalism and Republicanism. He had experienced the all-too-common moralistic therapeutic deism that marks so much of Evangelicalism. He had grown weary. What he comes to see is that Christianity is far wider and far better than what he had experienced as a youth. He comes to see that the Christian faith continues to be relevant even in a postmodern culture. He writes, “I don’t think any church has ever been relevant to culture, to the human struggle, unless it believed in Jesus and the power of His gospel.”

Through Miller’s time at Reed College, and through the relationships he developed there, he describes his arrival to a form of Christian spirituality that is imprecise and difficult to define, just like jazz music. Where jazz is nearly impossible to score, so the Christian faith is difficult to define, describe and limit. Where many Christians see life as a journey guided boldly by the Bible, he sees life as more of a meandering journey. “For me, the beginning of sharing my faith with people began by throwing out Christianity and embracing Christian spirituality, a nonpolitical mysterious system that can be experienced but not explained.”

This journey is told through skillful, self-deprecating writing, and an irreverent tone that draws many people, and young people in particular. In his memoir he arrives at an ambiguous relationship with many key doctrines of Christianity, with sin, with the local church. “At the end of the day, when I am lying in bed and know the chances of any of our theology being exactly right are a million to one, I need to know that God has things figured out, that if my math is wrong we are still going to be okay. And wonder is that feeling we get when we let go of our silly answers, our mapped out rules that we want God to follow. I don’t think there is any better worship than wonder.”

Sales of Blue Like Jazz began slowly, but began to increase after a couple of years. In 2007, three years after its release, the book had sold 500,000 copies and was awarded ECPA’s Gold Book Award. Just one year later it had crossed the one million threshold and was awarded the Platinum Book Award.

Blue Like Jazz was released at the dawn of what became known as the Emerging Church movement. Miller’s journey from fundamentalism to Christian spirituality quickly branded him as a leader in this movement even though he was not officially a part of any Emerging organization. His voice was a fresh and powerful one and extended through that movement and far beyond. His writing attracted many young people—primarily Gen-Xers—who were equally disaffected with the faith of their youth. In many ways, Miller became their spokesman, putting into words what many were feeling and desiring. Jonathan Leeman says it well:

I don’t have the exact quote, but Emerson said somewhere that great writers hold up a mirror to the world around them and say, “Here you are.” Blue Like Jazz holds up this mirror for the Gen X segment of 1980s and 90s evangelicalism—my own peer group. We grew up with one foot in the world of seeker-sensitive worship services and another foot in the world of MTV, shopping malls, and sitcom laugh tracks. We eventually discovered how much the first world borrowed from the second to keep us coming back. This realization in turn led us to be skeptical toward the whole Christian program, as if Jesus were just one more product. Many of us therefore left the faith, while those of us who remained insisted on something more real, more authentic, from our Christian spirituality. Often, this search led us outside the boundaries of conventional churches.

Where Miller’s diagnosis was insightful, many conservative Christians criticized his book on a number of counts, and especially for its postmodern ethos which led to a lack of grounding in the authority of Scripture. Miller often eschews firm answers to matters of life and doctrine and this concerned those who hold up Scripture as a clear and final source of authority. Miller was also critiqued for what many reviewers saw as a weak and man-centered gospel displayed in statements like this one: “I realized, after reading those Gospels, that Jesus didn’t just love me out of principle; He didn’t just love me because it was the right thing to do. Rather, there was something inside me that caused Him to love me.” Finally, many reviewers were concerned with his depiction of Jesus which emphasizes his kindness and gentleness while downplaying his justice and his wrath. Reviewers determined that while this is a Jesus Miller and his readers may want, it was not the Jesus of the whole Bible.

Parenthetically, one of Miller’s most memorable characters was “Mark the Cussing Pastor,” a Seattle-area preacher who was known for his foul mouth. One year later, this preacher—Mark Driscoll—would release a book of his own: The Radical Reformission.

Since Blue Like Jazz, Miller has written several books, including Searching For God Knows What, To Own a Dragon: Reflections On Growing Up Without a Father, and A Million Miles in a Thousand Years. Today he is Founding Director of The Burnside Writers Collective and hosts semi-annual Storyline conferences which assist people in creating life plans. He also travels widely and speaks at a variety of conferences.

In 2012 a film adaptation of Blue Like Jazz, directed by Steve Taylor, made its way to theaters. The film fared poorly at the hands of reviewers, with fewer than 40% of them reviewing it positively. It earned less than half of its production cost at the box office.

More recently Miller has ignited controversy through his admission that he no longer attends a local church and has found alternative ways to experience God.

Ten years ago the Emerging Church and other expressions of postmodern Christianity were surfacing as significant forces in Christianity. Donald Miller served as a much-loved, widely-respected, but controversial voice. I reviewed his book in 2005, just as it began to hit its stride.

I have long believed that the church growth movement and seeker-sensitive, big-box Christianity spawned a significant kind of rebellion shortly after the dawn of the new millennium. Some gravitated toward postmodern expressions of Christianity and found a voice in Donald Miller and other emerging voices. Many of those who did not gravitate toward postmodernism discovered Reformed expressions of Christianity and found a voice in John Piper and in others like him. In this way Miller’s book was polarizing. While most appreciated the diagnosis, only some took the cure.