This morning I am beginning a new Sunday series called “The Bestsellers.” The Evangelical Christian Publishers Association tracks sales of Christian books, and awards the Platinum Book Award for books whose sales exceed one million, and the Diamond Book Award for sales exceeding ten million. In this series I will look at the history and impact of some of the Christian books that have sold more than a million copies—no small feat when the average Christian books sells only a few thousand. We will encounter books by a cast of characters ranging from Joshua Harris, Randy Alcorn and David Platt all the way to Joel Osteen, Bruce Wilkinson and William Young. We begin with a book that received the Platinum Book Award in 2005: I Kissed Dating Goodbye by Joshua Harris. 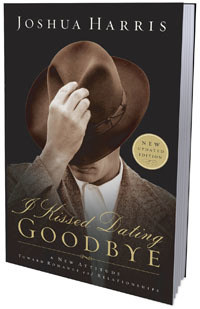 Joshua Harris was born in 1974, the first child of Gregg and Sono Harris. His parents were pioneers in the Christian homeschooling movement which was only in its infancy while Josh and his siblings were growing up. Gregg’s book The Christian Home School was a foundational text for homeschoolers and a Christian Booksellers Association bestselling title in 1988.

Josh grew up outside Portland, Oregon, and professed faith in Christ as a teenager. By the time he was 17, he was establishing himself as a leader and teacher, speaking at youth events and conferences. Beginning in 1994, he began publishing New Attitude, a magazine targeted at fellow homeschoolers, and one that quickly gained a substantial readership. He was now the second generation of Harris’s to make a mark in homeschool circles. His influence was about to extend far beyond what was then still a small and close-knit community.

In 1997 Multnomah Publishers released I Kissed Dating Goodbye, a book Harris had written when he was just twenty-one years old. In this book he tells why he rejected dating in favor of courtship, and he calls on his readers to do the same. He believes courtship represents a better and more biblically-faithful model of beginning and building a romantic relationship.

Dating, as understood and practiced by many believers and unbelievers alike, too often proves an obstacle rather than an aide to living for God’s glory. Harris suggests that dating comes with at least seven serious pitfalls. Dating…

The cultural expectation for teenagers and young adults is that they will experience a succession of short-term romances before finally finding true love and settling down with one person. This system, though, is built to fail. When people finally do marry, they often do so with a long history of heartbreaks, baggage, and sexual failure.

Writing from the perspective of personal experience, Harris says that in place of this kind of “dumb love,” Christians ought to emphasize “smart love.” Where dumb love is primarily concerned with self, smart love begins with a love for God and matures into love and concern for others. Smart love manifests itself in courtship, which is simply dating with purpose. He does not describe dating as a model that is necessarily sinful, but as a lesser option than courtship. Courtship is superior because it is meant to protect against heartache and regret.

By 2001 I Kissed Dating Goodbye had sold 714,000 copies and received ECPA’s Gold Book Award (given to books exceeding 500,000 copies sold). Four years later it had reached the million threshold and was awarded the Platinum Book Award.

I Kissed Dating Goodbye suddenly and unexpectedly catapulted the word “courtship” into mainstream Evangelicalism and sparked a wide-ranging controversy over dating and romance. Christians were forced to examine what they believed about romantic relationships. For many Christians, this was the first time they had considered the issue. Harris was not interesting in re-introducing ancient models of courtship and romance as much as he wished to call couples to consider dating with purpose. In many cases his book succeeded in doing this. It was read and discussed in youth groups around the world and caused countless teens to consider an alternative to casual dating.

The discussion his book generated was integral in shaping his generation of young Christians. As that generation has grown up and matured, some now commend and some now condemn the book. Where many followed the book’s counsel and avoided the relational difficulties and baggage that so often come hand-in-hand with casual dating, others insist it led to confusion and anxiety when it came to forming relationships and finding a marriage partner. Some saw courtship become a divisive issue within local churches, with Christians rallying to one side or the other.

Since 1997, a multitude of books have critiqued or affirmed Harris’ approach, while others have nuanced it, often teaching similar principles but without the use of the controversial word “courtship.” Courtship has continued to be a hot-button issue, especially in very conservative Christian circles. It was Harris who established courtship as a legitimate alternative to dating, and it is feasible that the modern courtship movement would not exist had it not been for I Kissed Dating Goodbye.

Harris’ ideas on dating and courtship were more fully developed in Boy Meets Girl, a book he wrote after marrying his wife, Shannon. In 2009 he wrote an article titled “What I’ve Learned Since I Kissed Dating Goodbye” and here he said he stands by the basic message of the book: that short-term romantic attachments can be a big distraction from serving God—especially for teenagers. However, he also explained how his book had proven divisive in some contexts:

I’ve also seen that a legalistic application of these ideas can be unhelpful, too. One of my main concerns in my church or any other church is that there be no disunity among Christians over issues of dating and courtship. We need to learn to hold our own convictions on this matter with charity. Most importantly we need to make sure that our convictions are shaped by scripture—not culture, church culture or my books.

I Kissed Dating Goodbye propelled Harris to the public eye and gave him a wide platform. However, even as he was given every opportunity to become a “professional Christian,” he became convinced of the primacy of the local church in Christian life and, in 1997, moved across the country to Gaithersburg, Maryland. There he became a member of Covenant Life Church and received on-the-job pastoral training under the mentorship of C.J. Mahaney. New Attitude magazine was put aside in 1997 in favor of New Attitude conferences which began in 1999 and continued in various forms until 2012. In 2004 Harris succeeded Mahaney as pastor of Covenant Life Church, a position he holds to this day. He is married with three children and has written several more books: Boy Meets Girl (2000); Sex Is Not the Problem, Lust Is (first published as Not Even a Hint) (2003); Stop Dating the Church (2004); Dug Down Deep (2010); and Humble Orthodoxy (2013).

2020 Update: More recently, Josh has disavowed his books and removed them from publication. He has also been divorced and revoked the Christian faith.