Today I continue this series of articles that takes a look at books that have been awarded the Platinum or Diamond Sales Awards from the Evangelical Christian Booksellers Association. The Platinum Award recognizes Christian books that have reached 1 million sales while the Diamond Award recognizes the few that have surpassed the 10 million mark. Today we turn our attention to a book that uses a fictional story to make a real-life and deadly serious point.

The Harbinger by Jonathan Cahn

Jonathan Cahn was born into a devout, reform Jewish home in New York. He revoked his faith as a child, declaring himself an atheist, but when 20 years old, encountered the Christian faith and determined that Jesus is the Messiah. Today he is President of Hope of the World ministries and both Senior Pastor and Messianic Rabbi of the Beth Israel worship center in Wayne, New Jersey. 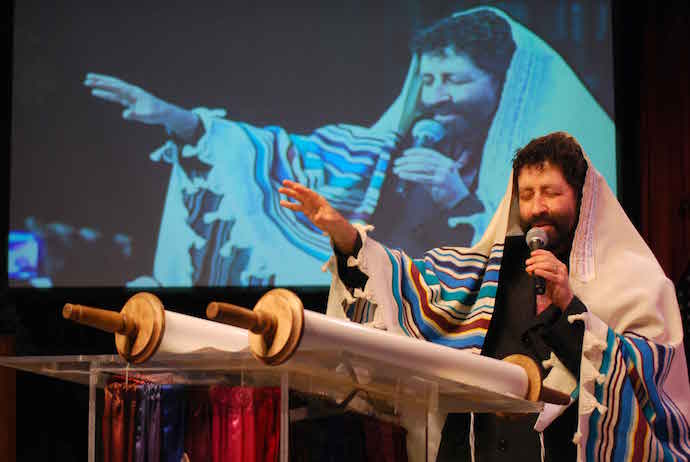 One of Cahn’s particular interests is biblical prophecy and it was this that led him to write his debut novel The Harbinger: The Ancient Mystery that Holds the Secret of America’s Future. It released in 2012 and very quickly made a tremendous splash. With only a few exceptions, the Christian novels that sell a million copies are what we might call didactic or theological novels—novels that use fiction not simply to tell a story but to instruct the reader. The Shack and its redrawing of the Trinity is an obvious example and The Harbinger very clearly falls into this same category.

Within the story are claims that the author insists are factual, biblical, and of critical importance. He claims to reveal an ancient mystery that holds the secret to America’s future. He tells how this truth has been hidden in the pages of the Bible until he uncovered it. The book is essentially a lengthy exposition of Isaiah 9:10: “The bricks have fallen down, but we will rebuild with hewn stones; The sycamores are cut down, but we will replace them with cedars.” It is, in fact, a two-level exposition of this text, applying it both to ancient Israel and to contemporary America. An excerpt of dialog will help show what he believes and what he means to teach:

“But what does America have to do with ancient Israel?”

“Israel was unique among the nations in that it was conceived and dedicated at its foundation for the purposes of God.”

“But there was one other—a civilization also conceived and dedicated to the will of God from its conception…America. In fact, those who laid its foundations…”

“No, long before the Founding Fathers. Those who laid America’s foundations saw it as a new Israel, an Israel of the New World. And as with ancient Israel, they saw it as in covenant with God.”

“Meaning its rise or fall would be dependent on its relationship with God. If it followed His ways, America would become the most blessed, prosperous, and powerful nation on earth. From the very beginning they foretold it. And what they foretold would come true. America would rise to heights no other nation had ever known. Not that it was ever without fault or sin, but it would aspire to fulfill its calling.”

“To be a vessel of redemption, an instrument of God’s purposes, a light to the world. It would give refuge to the world’s poor and needy, and hope to its oppressed. It would stand against tyranny. It would fight, more than once, against the dark movements of the modern world that threatened to engulf the earth. It would liberate millions. And, as much as it fulfilled its calling or aspired to, it would become the most blessed, the most prosperous, the most powerful, and the most revered nation on the earth—just as its founders had prophesied.”

The correlation between ancient Israel and modern America allows Cahn to read the Bible’s prophecies in such a way that they apply equally to both nations. “Before its end as a nation, there appeared in ancient Israel nine specific warnings and omens of national destruction – These same nine Harbingers are now manifesting in America with profound ramifications for America’s future and end-time prophecy.” These warnings, he says, are real and must be heeded before it is too late. 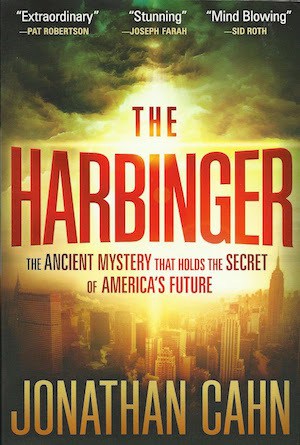 The Harbinger was an immediate smash hit. By 2012 it had already crossed the 500,000 mark and the next year it was awarded the Platinum Sales Award for surpassing 1 million sales. It has since more than doubled that total. While sales were brisk and reader reviews were enthusiastic (currently 8,436 at Amazon with an average of 4.5 stars), the book also received a number of serious critiques for both its quality as a novel and its theology. When addressing the latter concern, most critics pointed out that Cahn violates basic and well-established rules of biblical interpretation by applying to America prophecies given to ancient Israel. The Berean Call made this clear: “Cahn gleans nearly all of his correlations connecting America with a prophecy made to Israel from one verse—Isaiah 9:10. To begin with, this verse applies only to the tribes of the Northern Kingdom of Israel, who, along with the Southern Kingdom of Judah, comprise God’s covenant people. All the way through TH , the United States is presented implicitly as a nation in covenant with God. No, God has only one covenant nation—the nation of Israel.”

Many reviewers also pointed to the dubious correlation between words recorded in the Bible and historical events that have since taken place in or to America. “The nine harbingers are selectively (and erroneously) taken from Scripture and are then given life by the comparison to similar things surrounding 9/11, which are then identified with Isaiah 9:10.” But, of course, similarity does not indicate identity.* One reviewer concluded that “The Harbinger is a distraction from properly understanding the Word of God, particularly prophecy and so can legitimately be characterized as dangerous. It conveys what the author believes is a prophetic message, but the book clearly does not meet the tests for a prophetic Word from God.”

Not surprisingly, the success of The Harbinger generated some unique opportunities for Cahn to spread his message. At the United States Capitol Building he spoke before a number of national leaders after being introduced by Mike Huckabee who described The Harbinger as “remarkable,” “soul-stirring,” “stunning,” and “spell-binding.” Joseph Farah of WorldNetDaily produced a two-hour program featuring Cahn which further popularized his work. He was also featured on The 700 Club where Pat Robertson praised the book and recommended it to his viewers.

The Harbinger spawned a number of related resources, the first of which was The Harbinger Companion, a study guide of sorts. In 2014 Cahn released The Mystery of the Shemitah: The 3,000-Year-Old Mystery That Holds the Secret of America’s Future, the World’s Future, and Your Future! and this September is set to release The Book of Mysteries, a daily devotional in which “the reader will discover life-transforming secrets, mind-blowing realities, and heart-changing revelations in such mysteries as the Face in the Waters, the Leper King, the Land of Gezarah, the Secret of the Third Prince, the House of Spirits, the Mystery of the Rains, How to Alter Your Past, the Second Scroll, the Similitude, the Mystery of the Eighth Day, and much more.”

I read The Harbinger after receiving a number of requests for a review. I found it difficult to read as a novel and utterly exasperating as a work of theology, though I was at least glad to see that the author included a clear and substantial call to believe the gospel. I mostly left the heavy lifting to others while focusing on a couple of salient points, the first of which is one of the benefits of writing fiction: “What stood out to me as I read The Harbinger … is that writing fiction allows the author to dictate his reader’s reaction. He can present a mundane fact and follow it with a gasp or an expression of awe as if the reader has missed the obvious importance. This is something Cahn does often and to his advantage. What seems like a great stretch in logic can be rationalized or given increased credence by a character’s excitement.” It’s a tactic he uses regularly and effectively.

I concluded this way: “It’s not that The Harbinger has nothing good to say, but that so many of even those good things are built upon a poor and even dangerous foundation. The book depends upon a fundamentally flawed way of understanding and applying the Bible, treating the Bible as a mystery to be solved rather than a clear and sufficient explanation of what we are to believe concerning God and how we can live in this world to his glory. There is no good reason to read or recommend this book.” I stand by those words and assume it applies equally to Cahn’s other works.