A short time ago I launched a new series called “The Bestsellers.” The Evangelical Christian Publishers Association tracks sales of Christian books, and awards the Platinum Book Award for books whose sales exceed one million, and the Diamond Book Award for sales exceeding ten million. In this series I am looking at the history and impact of some of the Christian books that have sold more than a million copies—no small feat when the average Christian books sells only a few thousand. We will encounter books by a cast of characters ranging from Joshua Harris, Randy Alcorn and David Platt all the way to Joel Osteen, Bruce Wilkinson and William Young. Today we look at a bestseller that impacted me deeply.

The Treasure Principle by Randy Alcorn 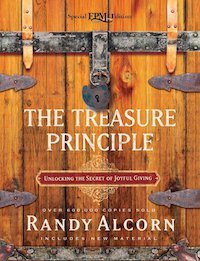 Randy Alcorn was born on June 23, 1954, in Portland, Oregon. His father owned a tavern and supplied amusement machines to other local taverns while his mother chose to stay home with the children. Randy grew up without any Christian background and first attended church as a teenager, primarily to pursue a young lady. It was at that church and at its youth group that he first heard the gospel. He became a Christian in 1969 and later married the girl he had followed to church. Very quickly he knew that he wanted to go to Bible college to study God’s Word and then to become a missionary. However, he soon found himself co-founding and pastoring Good Shepherd Community Church in Boring, Oregon, the church he continues to attend today. He pastored for thirteen years before an event that forever changed his life and ministry.

In 1989 Alcorn participated in some nonviolent rescues at abortion clinics. Like many others, he was arrested a number of times and spent a few days in jail. But one of those clinics won a judgment against him that required him to pay a hefty fine. Alcorn told the judge he would pay anything he owed, but he would not give a penny to people who would use that money to abort babies. In early 1990 he learned that his church would be forced to pay one forth of his wages each month to that abortion clinic. He immediately resigned his position. In fact, the only way he could avoid paying money to that clinic was to ensure that he did not earn more than minimum wage. It was at this point that he founded Eternal Perspectives Ministries. (Consider reading the full story.)

Since that day Alcorn has never earned more than minimum wage. All of his book royalties have gone to Eternal Perspectives Ministries and used to support missions, pro-life work, and other Christian causes.

Since 1985 Alcorn has written many books, but none have been more popular than The Treasure Principle which was published in 2001. Released with little fanfare and with only three brief endorsements (including John Piper’s who says, “Supercharged with stunning, divine truth! Lightning struck over and over as I read it.”) the book claims to “unlock the secret of joyful giving.” The “treasure principle” is this: You can’t take it with you—but you can send it on ahead. Alcorn says, “If we give instead of keep, if we invest in the eternal instead of in the temporal, we store up treasures in heaven that will never stop paying dividends. Whatever we store up on earth will be left behind when we leave. Whatever treasures we store up in heaven will be waiting for us when we arrive.”

Along with the principle he offers six keys:

A simple book, and a short one, spanning only 120 small pages, the book is the very opposite of The Prayer of Jabez and so many other books on giving and prosperity. He teaches the importance and the sheer joy of giving consistently and generously to the Lord’s work, all the while giving up treasures on earth in order to store up treasures in heaven.

Where many other books have seen explosive sales, The Treasure Principle has sold steadily over the past thirteen years. It took four years to sell its first 500,000 copies (it received the Gold Book Award in 2005) and another three years to reach one million copies, receiving the Platinum Book Award in 2008. Notably, 2008 was also the year another of Alcorn’s books, Heaven, attained Gold status. While these sales are not exactly slow compared to most other Christian books, they are slow when compared to other books that have attained Platinum status.

Alcorn’s book was well received by Evangelicals and has been used to help form many people’s theology and philosophy of money, possessions and giving. Many have remembered the simple phrase at the heart of the book: You can’t take it with you–but you can send it on ahead.

Since the award, Alcorn has written many books, the most noteworthy of which is Heaven which received the Gold Book Award in 2008 and the Platinum Book Award in 2014. He has written two other books on the subject of money: Money, Possessions, and Eternity and Managing God’s Money.

Few authors have had a greater impact on my day-to-day living than Randy Alcorn. I have never met him, though we spoke on the phone once when I was wrestling with a particular issue. I have never deliberately thought about imitating him or trying to do it, but in some ways I do. Managing God’s Money (and The Treasure Principle) were foundational to my understanding of money. His emphasis on heaven and eternity have helped me be more heavenly-minded. His love for unborn life has shown me how important it is that we do not grow weary in that fight and I have since found myself speaking at pro-life events and serving on the board of a pregnancy care centre. His writing has been instrumental in teaching me how to put theology into practice. When I look at my life, I see his influence through his books, and for that I am grateful.