A short time ago I launched a new Sunday series called “The Bestsellers.” The Evangelical Christian Publishers Association tracks sales of Christian books, and awards the Platinum Book Award for books whose sales exceed one million, and the Diamond Book Award for sales exceeding ten million. In this series I will look at the history and impact of some of the Christian books that have sold more than a million copies—no small feat when the average Christian books sells only a few thousand. We will encounter books by a cast of characters ranging from Joshua Harris, Randy Alcorn and David Platt all the way to Joel Osteen, Bruce Wilkinson and William Young. Today we look at a book that introduced many of us to one of this generation’s most popular preachers. The book is titled Your Best Life Now. 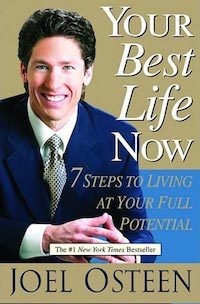 Joel Osteen was born on March 5, 1963, the son of John and Dolores (known as “Dodie”) Osteen. John founded Lakewood Church in Houston Texas on May 10, 1959, and pastored the church until his death in 1999. While he began his career in ministry as a Baptist, he later experienced something he believed was the baptism of the Holy Spirit and founded Lakewood as a haven for charismatic Baptists. By the 1980s John and Dodie had become well-known among their fellow charismatics. The church had over 5,000 in attendance and their services were broadcast across the world. From a young age Joel was involved in this work, laboring behind the scenes in support of the family ministry.

When John Osteen died suddenly of a heart attack on January 23, 1999, Joel, who had preached his first sermon the week before, succeeded him as pastor with his wife, Victoria, serving as co-pastor. Very quickly, the church exploded in growth and Joel’s broadcasts become more popular than his father’s had ever been; his sermons, full of homespun wisdom and messages of self-empowerment, were heard all over the world and it was only a matter of time before he penned his first book.

In October 2004 FaithWords released Your Best Life Now: 7 Steps to Living at Your Full Potential. The book is framed around seven steps meant to instruct the reader in living out God’s big dream for his life.

The great promise at the end of it all, is that by following these seven simple principles, each of us can have our best life now.

Your Best Life Now quickly debuted on the New York Times list of best-sellers and remained there for more than two years. By December, just three months after its release, Your Best Life Now had tallied over 500,000 sales and was awarded the Gold Book Award. In May 2005 it achieved 1 million sales and received the Platinum Book Award. To date it has sold over 4 million copies.

Osteen’s book was widely criticized by Christian leaders for ignoring the gospel of salvation through Christ’s atoning sacrifice in favor of a gospel of financial and life-wide prosperity. While Osteen claimed to be teaching biblical principles, he was instead picking and choosing isolated verses of the Bible to teach self-empowerment much as Norman Vincent Peale and so many others had done before him. In a helpful review of the book, Greg Gilbert summarizes it well: “Yes, Osteen talks about God throughout, but it is not the God of the Bible he has in mind. Osteen’s God is little more than the mechanism that gives the power to positive thinking. There is no cross. There is no sin. There is no redemption or salvation or eternity.” He continues: “If Joel Osteen wants to be the Norman Vincent Peale of the twenty-first century, he has every right to give it a shot. But he should stop marketing his message as Christianity, because it is not. You cannot simply make reference to God, quote some Scripture, call what you’re saying ‘spiritual principles’ and pass it off as Christianity. That’s the kind of thing that will have people ‘enlarging their vision’ and ‘choosing to be happy’ all the way to hell.”

Despite such critiques, the book proved extremely popular among Christians and non-Christians alike and was followed by a series of similar works.

Your Best Life Now catapulted Osteen to new heights of exposure and influence. Barbara Walters declared him one of her “10 Most Fascinating People of 2006” and in that same year readers of Church Report Magazine named him “Most Influential Christian in 2006.” He was invited to make many appearances on television programs including 60 Minutes, and he made much-publicized visits to Oprah Winfrey and Larry King. He also began to travel extensively and internationally for sold-out events called “A Night of Hope.”

Today Lakewood Church meets in what used to be the Compaq Center, the 16,000-seat former home of the Houston Rockets. Nearly 40,000 people attend each week, making Lakewood Church America’s largest congregation. Since Your Best Life Now, Osteen has authored several other books, most of which have appeared on the lists of bestsellers. They include Become a Better You, It’s Your Time, Every Day a Friday, I Declare, and Break Out.

The very first time I saw Joel Osteen on television, he was speaking about the importance of a healthy diet, including the rejection of pork, shellfish, and other unhealthy foods. My son, who was probably five or six at the time, listened for a minute and said, “That’s not the gospel!” I learned that day that even a child can unmask his teaching as nothing more than a feel-good brand of self-empowerment. Shortly thereafter someone gave me a tongue-in-cheek gift: a copy of Your Best Life Now, the board game. It may well be one of the worst games ever created and includes looking in a mirror to say empowering and encouraging phrases to yourself.

I have written about Osteen and his books a few times over the years. He was the inspiration for an article I titled “Smilingly Leading You to Hell” in which I said, “Both the history of the church and contemporary Evangelical church are replete with nice people who are in complete rebellion against God. Is there anyone nicer than Joel Osteen? Yet is there anyone whose message has less of the gospel and more anti-biblical nonsense? You can watch him in this video, sitting with Oprah, receiving accolades, nicely, smilingly leading an eager crowd farther and farther from the cross. He is nice, but he, too, will nice you straight to the gates of hell, flashing that brilliant smile all the while.” I stand by those words.