A few weeks ago I set out on a series of articles through which I am scanning the history of the church—from its earliest days all the way to the present time—to examine some of Christianity’s most notable false teachers and to examine the false doctrine each of them represents. Along the way we have visited such figures as Joseph Smith (Mormonism), Ellen G. White (Adventism), Norman Vincent Peale (Positive Thinking) and Benny Hinn (Faith Healing). Today we turn to a post-Reformation nun whose mysticism has remained influential through the centuries. She represents the false teaching of mysticism. 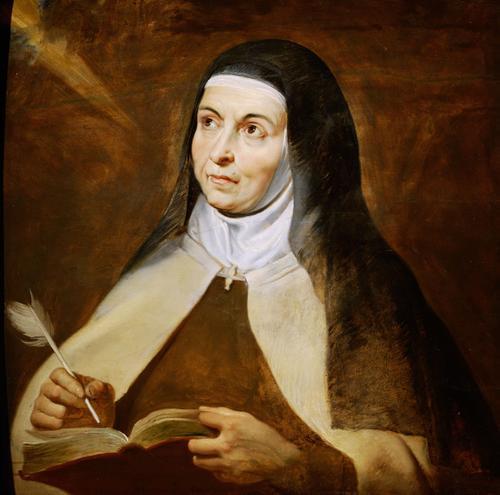 Teresa of Avila was born on March 28, 1515, to a family that would soon number twelve. Sadly, Teresa’s mother died in 1529 and against her father’s wishes, she entered the Carmelite Convent of the Incarnation at Avil. Very quickly she encountered significant health concerns and was rendered an invalid for three years. It was during this time that she discovered and developed a love for prayer. However, once her health was recovered, this dedication to prayer soon waned. At that time, and in that area, the Carmelites were a relaxed order and living as a nun was easy, respectable, and could even be glamorous at times.

In 1554, when she was almost 40, Teresa had an intense religious experience while she was before an image of the wounded Christ in the convent’s private chapel. She felt that Christ “was within me, or that I was totally engulfed by him.” Such experiences became more common and she became accustomed to Christ appearing to her and engulfing her in his love, though this was regarded with suspicion by her fellow nuns and by her priest confessors. There was suspicion toward anyone who claimed to be receiving special illumination or revelation from God.

In 1558, increasingly concerned with the laxity of Carmelite life, Teresa began to consider reform. This reform would require Carmelite nuns to completely withdraw from society around them so they could dedicate their time and attention to prayer, and through a life of repentance and penance, do works of reparation for the sins of mankind. Pope Pius IV authorized this reform and in 1562 she founded a new convent, insisting that the nuns survive only through receiving public alms. She would give the rest of her life to establishing and growing sixteen of these convents through Spain. Though it all, she would have ongoing and increasing mystical experiences.

She left behind a significant number of books including The Way of Perfection (1583), and The Interior Castle (1588), which many regard as a masterpiece of spiritual autobiography alongside Augustin’s Confessions. Beside her books, she left behind some 31 poems and 458 letters.

Teresa died of cancer on October 4, 1582. It was said that she died in a state of ecstasy and that as she died, any object she had touched sent forth a sweet odor. Forty years later she was canonized by Pope Gregory XV and thereafter named a Doctor of the Church by Pope Paul VI, the first female to be so honored.

Teresa was a mystic. Donald Whitney says mysticism refers to “those forms of Christian spirituality which attempt direct or unmediated access to God.” Mystics are those who expect to experience “a direct inner realization of the Divine” and an “unmediated link to an absolute.”

At the heart of Teresa’s teaching was the ascent of the soul into sweet and unbroken mystical communion with God. She described four progressive stages in this ascent.

Despite significant opposition to her experiences and reform, Teresa gained a substantial following in her day and was influential on her generation of fellow Carmelite nuns and on other mystics such as John of the Cross. Her influence has only widened in the centuries since, and especially after her canonization. Her books have been the primary means of disseminating her ideas.

In days past her many admirers have seen her in many different lights. “George Eliot, who cast Teresa as patron saint of the frustrated bluestocking Dorothea Brooke in Middlemarch ; Vita Sackville–West, who made Teresa into a twentieth century free spirit with (but of course) lesbian proclivities; and a range of feminist theorists, from Simone de Beauvoir in The Second Sex to the tenured denizens of numerous women’s studies departments. To them, Teresa was a postmodern “subversive” against patriarchal power structures both secular and ecclesial, androcentric metanarrative, and whatever else is currently deemed oppressive to the female sex.”2

In recent days her influence among Christians has grown, and especially during a resurgence of interest in contemplative prayer. Her doctrine of asceticism is considered a classic explanation and exposition of the contemplative life. Teresa’s understanding of the soul’s ascent and the mystical communion with God through contemplative prayer has been influential to the likes of those who have a fascination with mysticism including Brennan Manning, Richard Foster, and Watchman Nee, along with many who were (or are) associated with Emerging Christianity. We can also spot her direct or indirect influence in the works of bestselling authors like Sarah Young (Jesus Calling) and Ann Voskamp (One Thousand Gifts).

At the heart of mysticism is the primacy of experience over Scripture. Mystics seek to experience God directly rather than through the mediation of the Bible. Scripture demands for itself a unique place in the Christian life and church and mysticism threatens to supplant it. One of the great challenges before every Christian and every generation of Christians is this: Will the Bible be enough? Will we affirm the sufficiency of Scripture—that the Bible is all we need for life and doctrine—or will we demand that God reveal himself to us in other ways, such as mystical raptures?

Protestants have long held to the doctrine of sola scripture—Scripture alone. Teresa wrote during the Counter-Reformation, the period of time in which Rome was responding to the challenge of these Protestant doctrines. Donald Whitney says, “the Scriptures alone—and not anyone’s individual experience nor the collected and distilled corporate tradition of the church—are our final authority. And the Scriptures are our final authority because the Scriptures are what God says. In this context sola scriptura means that the Bible is the ultimate authority in all matters of faith and Christian living, and thus the ultimate authority in spirituality.” The Bible is also “a sufficient guide for our spirituality. In other words, the authority for our spirituality claims its sufficiency as the director of our spirituality.” The Bible will guide us not only in what we know of God but also in how we know God.

Whitney offers two ways we cross this boundary of sola scriptura. The first is whenever

we seek an experience with Him in a way not found in Scripture. In one sense it is difficult to think of an example of an encounter with God for which there is nothing remotely similar in the Bible. Yet in another sense mankind seems to have a unlimited capacity to invent ways to “get in touch with God.” And all these have in common the presumption of the ability to experience God apart from the forms He has selected, and/or the presumption of the ability to experience Him immediately, that is, unmediated by God’s ordained means of revealing Himself to us.

A second way to cross the boundary of sola scriptura is

Note: Readers pointed out that initially I did not properly cite Wikipedia’s entry on Teresa of Avila; I appreciate having that pointed out and added a footnote as appropriate. It was clearly marked as a quote in my research notes but that did not make it to the article. As for the general tone of the article, it is meant to be informational more than biographical, by which I mean I do not provide exhaustive information about the false teachers; most of my interest is in the false teaching. Of course this does not excuse sloppy or inaccurate information and this article did not adhere to the standards I would want it to. I am traveling this week and, being away from my usual routines and my usual reference works, allowed myself to be sloppy in both research and writing. It would have been far better to save this for another week and to ensure it was of better quality. I will attempt to revisit this article soon and to do a better job of it. For the next few days I am in Australia preaching two to three times a day and I need to prioritize that (I’d really appreciate your prayers in this time as I have not adjusted well to the fourteen time-zone difference and am extremely tired); I will return to the article after I return to Canada. In the meantime, please do forgive me for my sloppiness.