This is the long-awaited third part of a series I began quite some time ago, a series which I am writing not primarily to rehash the theology of each of the points or to provide an exhaustive apologetic of Calvinism, but to draw some fresh application and to show what these doctrines mean to me as I ponder them and attempt to live in light of them. I hope to show that these doctrines of grace are more than “mere theology,” but can be integral in living out the Christian faith. I am assuming that my readers are, by and large, familiar with the Points of Calvinism. Still, I will provide a brief explanation of the doctrine before drawing application.

The “L” in the TULIP acronym refers to Limited Atonement, though, like many people, I prefer to speak of Particular Redemption (or, with Michael Horton, to speak of “Mission Accomplished”). Just as the “Total” in “Total Depravity” and the “Unconditional” in “Unconditional Election” can cause people to immediately draw wrong conclusions about the theology, so they “Limited” in “Limited Atonement” can make it seem that the work of Christ is somehow limited in a way that is outside of God’s control. This is, of course, impossible and just plain wrong. The doctrine of Particular Redemption says something like this:

Christ took only the sins of the elect upon Himself on the cross, providing a full and effectual (fully adequate) atonement for their sins. He did not provide only the potential for atonement, but actually provided the effectual atonement. His death secured everything necessary for salvation and this includes faith, which the Spirit graciously applies to the lives of the elect. Though Christ’s sacrifice was sufficient for the entire human race, it is only imputed (or given) to the elect and hence the atonement is not limited in its power, but in its extent. The reason for this limited or particular nature of the atonement is that were Christ to sacrifice and die for someone and then that person did not choose to be saved, it would make Christ’s work a failure. Thus, by way of short summary, the scope of Christ’s atonement is limited to those who are predestined to salvation and the primary benefits of this work is given only to those who believe.

Here is a way of illustrating the doctrine. 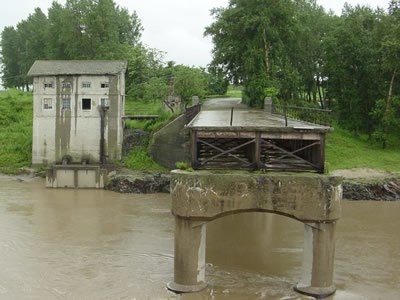 This is a picture of a bridge. To elaborate a little bit, we could say that it is a partial bridge. It doesn’t look broken, as if a piece of it fell away, but rather looks like it was built that far and then work simply ceased. It spans about half of what appears to be a pretty sizable river and then just ends (or begins, depending which direction you approach it from). I have no idea where this bridge is, what the circumstances are surrounding it’s state or if it has a name (though it would be interesting to know, wouldn’t it?).

Consider this river for a moment and let it represent the chasm between God and man – the chasm created by man’s fall into sin. On the bank of the river stands a man who represents humans in their fallen state, living on this earth. He gazes across the gap to the far side where he can glimpse God, and glimpse heaven. Now how will he get to heaven? This bridge can serve as an illustration of a doctrine known as “unlimited atonement” or “conditional universalism.” This is a doctrine that is the very opposite of Particular Redemption and in effect it states that it was never God’s will to save any specific person. Rather, it was God’s will to do all He could to save all men, provided they would do the little bit that He could not. In other words, the death of Christ erected this bridge which extends across part of the chasm. Man need only swim out into the current and hoist himself onto the bridge. From there he can walk safely into heaven. And if you look again you will see that this is a wide bridge, able to carry many people. This bridge is wide enough for anyone, but extends only part of the way.

Now consider a second bridge that looks like this: 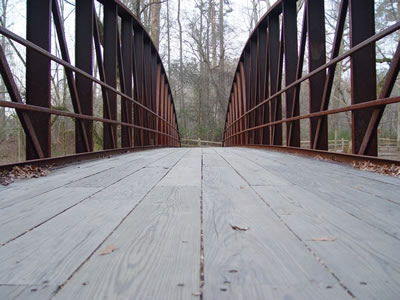 This bridge is quite a bit different from the last. Notice that rather than extending only halfway, this one extends from one bank to the other. Notice also that it is narrow, much narrower than the other. This bridge represents the doctrine associated with Calvinism that we know as Limited Atonement or Particular Redemption. This bridge spans the entire gap between God and man, though is not so wide as to carry all men, but only some. Where the first bridge was able to carry all men part of the way, this bridge carries some men the entire way.

Hebrews 12:2 tells us that Jesus is the “founder and perfecter of our faith.” He not only began but also finished the bridge. With His blood He “ransomed people for God from every tribe and language and people and nation,” (Revelation 5:9) not merely providing the potential for their redemption, but effectually redeeming them when He cried out “It is finished!”

When I wrote about the “T” in TULIP I said that the doctrine of Total Depravity stands as the great equalizer and when I wrote about the “U” in TULIP I said that it stands as the great humbler. When I ponder the doctrine of Limited Atonement and think about how it must be more than mere doctrine and how it must impact my life, I am continually drawn to the word “confidence.” This is not a confidence in myself, my own ability or even in my own status as a Christian, but a confidence in the Father and in the person and work of Jesus Christ. I like how Michael Horton in his book Putting Amazing Back into Grace describes this doctrine as “Mission Accomplished.” The Arminian understanding of this doctrine presents a Savior who did a great work of redemption but who did it for all men, both those who would be redeemed and those who would not. This is really conditional universalism, as Christ died for all men universally, the condition being that people must use their free will to embrace and accept Him. But the Reformed, biblical understanding of this doctrine presents a Savior who did the work of redemption for those whom the Father had chosen. He did not just do a work that had great potential to save, but a work that effectually saved.

Because Jesus Christ died for those who are His, and from the perspective of eternity, died for those who were already His–who had been chosen from before the foundations of the world–He accomplished what He set out to do. This doctrine gives me confidence that God will always and ever do exactly what He says. It gives me confidence that the promises of the Bible are not dependent on my initiative or my response, but are dependent on the very nature of God. What God says will surely come to pass because He provides the power to accomplish what needs to be done. Jesus Christ did not die for all men and then await my response to His work. Rather, He died for me and waited only for the time that the Spirit would begin to stir my heart and would call me to Himself. This gives me such confidence in God for it speaks so strongly of the way He works. It tells me that God acts sovereignty and depends upon no one but Himself. This stirs my heart, for I know that if He left the choice to me, I would reject Him every time. My heart swells with gratitude when I think that He died specifically and knowingly not for the mass of humanity, all of whom would willingly reject Him, but for the ones He had known from all eternity and the ones that He would draw to Himself.

We’ll continue this series (hopefully without as big a gap between entries) with the “I” from TULIP.