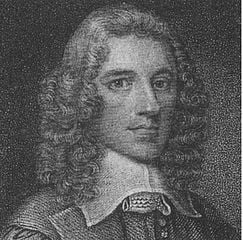 Stephen Charnock was born in London in 1628. He went to Cambridge University at age 14, and it was there that he came to faith in Jesus Christ.

In 1655 he was sent to Dublin to be a chaplain to Oliver Cromwell’s son, Henry, who was then governor of Ireland. At this post, Charnock gained the reputation of being a great preacher.

In 1660, when the monarchy was restored in England, Charnock returned to London. He is reported to have made a living practicing medicine for the next 15 years, until he and Thomas Watson began co-pastoring a nonconforming congregation. He served in this role until his death five years later.

Charnock was apparently a lifelong bachelor. Perhaps this helps explain his reputation of being a passionate and dedicated student. He is said to have had a very strong command of the original languages of Scripture and to spend 60 hours each week in study.

He wrote out much of what he studied and taught in the form of discourses that were much like extended sermons, each structured to focus on three things: a particular doctrine, the reasons for believing it, and its practical use.

Charnock had an analytical gift that enabled him to take great amounts of theological information and condense it down into clear, concise sentences. J. I. Packer writes that Charnock “of all the Puritans is the most brisk and businesslike when it comes to saying things straight.” Unfortunately, this gift came with a weakness on the other side. As Packer goes on to say, “Charnock is as strong as any in clearing heads, but is less able than some to stir the imagination and touch the heart.”

Here, courtesy of Meet the Puritans, are brief descriptions of his two most important works.

The Existence and Attributes of God – “This is the work on the character and attributes of God. It should be read by every serious Christian. The twelfth discourse on the goodness of God … is unsurpassed in all of English literature.”