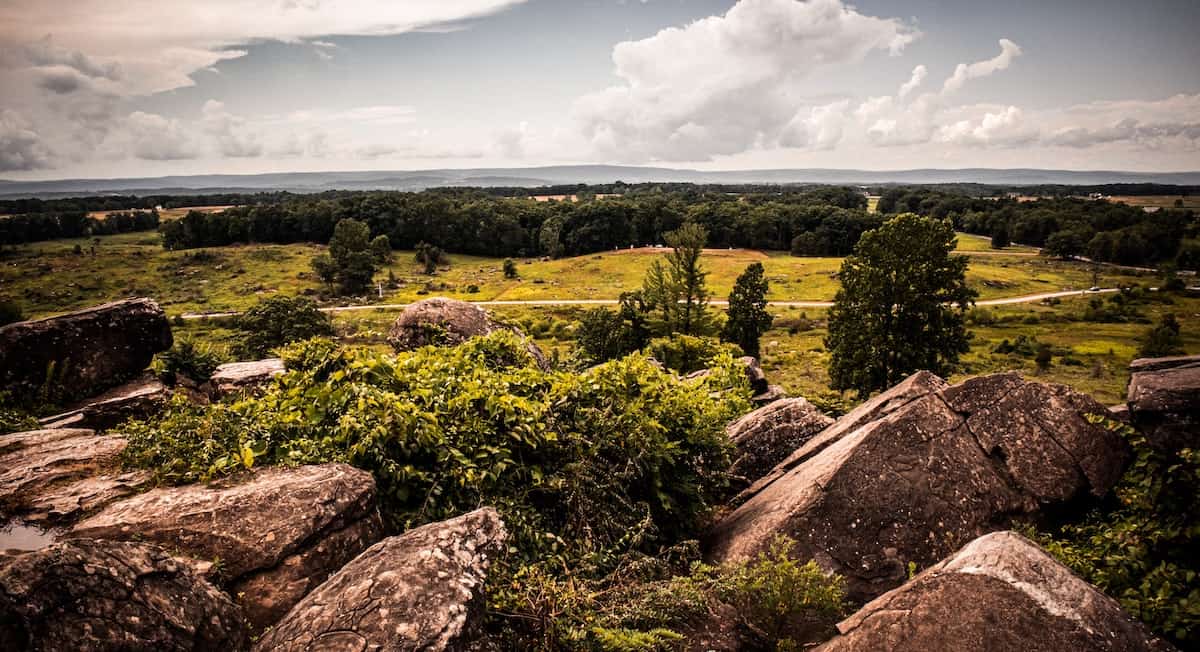 There are a number of childhood vacations that stand out in my mind, but none quite as clearly as our family trip to Gettysburg, Pennsylvania. I may have been 10 or 12 at the time and was a young enthusiast of all things military. I knew little of the Civil War, but did know that Gettysburg represented a turning point in the conflict, that the battle fought here had changed the course of the war and the course of American history. It fascinated me then and still does now.

I remember gazing at Seminary Ridge and picturing troops marching down over it. I remember ascending Little Round Top and imagining bayonets clicking into place and soldiers charging ahead. I remember walking through Devil’s Den and thinking what it must have been like to hear muskets firing and canons roaring, the blasts echoing through the rocks. My young imagination went into overdrive that day.

And, indeed, my imagination had to go into overdrive because on the day we visited, the battlefield was so very serene. It was nearly impossible to believe that it was the very same place where there had once been such brutality, such suffering, such bloodshed. The grass that day was green, well-tended, and undisturbed. Summer flowers grew up around the rocks and danced in the gentle breeze. Squirrels hopped and flitted about merrily. The few people around us walked calmly and talked gently as they poured over their maps and studied the host of monuments. There could hardly have been a greater contrast between the battlefield as it was that day and the battlefield as it had been a century prior.

The Bible tells us that the great battlefield of every Christian lies within—the desires of the flesh, the desires of the eyes, the pride of life. We have been created to have desires, but have allowed them to become twisted and perverted, to draw us away from God instead of toward him. We have scorned what God loves and loved what God scorns. Yet in his mercy God has saved us and indwelled us by his Spirit and begun to give us new desires, new longings for holiness. Though we are not nearly as holy as we long to be, we are certainly far more holy than we once were, for God is at work in us and through us.

We tulipy Reformed folk tend to speak often about the indwelling sin that remains—the indisputable evidences that though we may be saints, we are also still sinners. Yet we do well to pause often and consider the sin that no longer remains—the indisputable evidences that though we may still be sinners, we are also saints. For as we consider the way we once were—the temptations that once dogged us, the sins that once owned us—we ought to see evidence of great change, great victory. We ought to see that many of these temptations have loosened their grip, that many of these sins have been put to death. We ought to see that battles have been fought and won, that many historic battlefields are now calm and quiet, places of serenity rather than warfare, places of peace rather than conflict.

There is always something strange, something jarring about touring an old battlefield, for there the present clashes with the past, what is with what once was. This is no less true of the battlefields within our hearts than the battlefields scattered across our nations. And just as we can rejoice that the quiet battlefield is evidence that the battle is over and the war won, we can rejoice that the growing quiet in our hearts is evidence that battles are ending and the war drawing to its close. For already the great General has won, the great enemy has been vanquished, and the great war is drawing swiftly to its close.