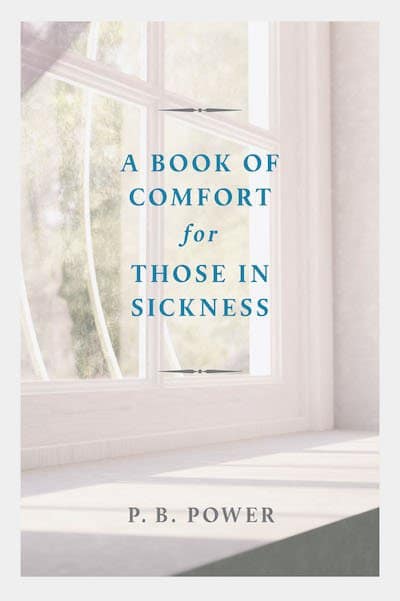 I woke up far too early and feeling far too discouraged. I had spent a restless night trying unsuccessfully to get comfortable through pain. I eventually gave up, slid out of bed, went downstairs, and got my coffee brewing. I knew this would be a day in which my hands would hurt too much to get any significant writing done. I’ve got deadlines looming and words waiting to be typed, but realized I wouldn’t be able to accomplish anything much. I felt despondent and knew that self-pity was lurking close at hand.

I suddenly remembered that the evening before I had heard a thump outside the front door that sounded like a package being dropped off. I pulled back the curtain and, sure enough, spotted a box perched on the step. I carried it inside, cracked it open, and found that it contained a stack of books. Facing me from the very top was one I had never heard of: A Book of Comfort for Those in Sickness. Don’t you love it how God sometimes allows us these clear glimpses of his providence? After getting the family up and helping the kids off to school, I sat down to read. I kept going until the book was finished. Despondency vanished. Hope was restored. It was a day well-spent.

A Book of Comfort for Those in Sickness was written by Philip Bennett Power, an Irish minister who first published it in 1876 under the title The Sick Man’s Comfort Book. This new edition with its new title is from Banner of Truth and I did not need to read far to see why they went to the trouble of reprinting it. It’s a short but powerful little book that does exactly what it claims—it offers comfort to those who are sick and suffering.

Though born in Ireland, P.B. Power became a minister of the Church of England and served a number of congregations in Leicester, London, and Worthing. However, in the prime of life his health broke down and he lived out the rest of his days as an invalid. In that way, this book was written in a context of deep suffering. Yet it is filled with hope and joy.

Power begins with a key observation: “Scripture tells us that God is a jealous God; and he is not only jealous of a man’s worshipping any other God, but of his being put second in anything; and, amongst other things, in comforting.” When we look for comfort in sickness or suffering, we are meant to look first to God. Over the course of a chapter, he goes to Scripture to show how God promises to comfort his people in all their distress. He lays down a three-part challenge: First, become convinced that God means to comfort his people. Second, look to God as your prime and first comfort. Third, expect that God will bring comfort.

With that foundation in place he goes on to explain hindrances and helps to believing that God is a God of comfort. He discusses the value of pain in the Christian life and grapples with the feelings of uselessness that can overwhelm people who are bedridden or otherwise unable to carry out a normal life. He deals with loneliness, with feelings of envy that arise when sick people compare themselves to those who are healthy, and with the struggles that come to those whose illness makes them a burden to others. He gently encourages the reader to have great confidence in the much greater mind and much greater purposes of God. He closes, as you might expect, by reflecting on the end of pain with the entry into glory.

I went through this book with pencil and highlighter in-hand and relished every page. There is so much I want to go back to and to reflect on further. But even with a single, brisk read, it spoke deeply and brought great comfort. And, wouldn’t you know it, that day of resting my hands allowed me to sit and write the next.

The history of Christianity holds many treasures, and I’m grateful to Banner of Truth for finding and sharing one in A Book of Comfort for Those in Sickness. It’s a book I’d recommend to each and every Christian. Buy one for yourself and buy one to pass to someone else. You’ll benefit and they’ll be blessed.