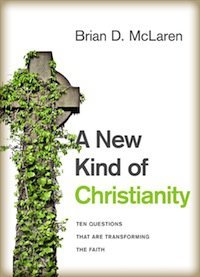 Early in George Orwell’s iconic 1984 is a particularly haunting scene. Winston, the hero of the story, is confessing to his diary a sexual encounter with a prostitute. Though Big Brother rigidly controls even sexual union and though sex is viewed as “a slightly disgusting minor operation, like having an enema,” still Big Brother cannot remove from humanity the desire and the need for intimacy. One evening Winston spots a prostitute near a train station. “She had a young face,” he writes, “painted very thick. It was really the paint that appealed to me, the whiteness of it, like a mask, and the bright red lips. Party women never paint their faces.” In a society where abject fear and loneliness are the norm, Winston craves the intimacy of sex. But as he goes into this woman’s apartment and lies with her, he turns up a lamp, casting a bright light on her face. And immediately he sees that the appearance of beauty was a lie. “What he had suddenly seen in the lamplight was that the woman was old. The paint was plastered so thick on her face that it looked as though it might crack like a cardboard mask. There were streaks of white in her hair; but the truly dreadful detail was that her mouth had fallen a little open, revealing nothing except a cavernous blackness. She had no teeth at all.”

But, despite his horror, his revulsion, Winston continues. In his diary he writes “When I saw her in the light she was quite an old woman, fifty years old at least. But I went ahead and did it just the same.” Though the woman loses all sexual appeal, Winston continues in this act. He continues because, though his desire is quenched, still sex is an act of rebellion. By sleeping with this prostitute he is engaging in an act of heart-felt rebellion against Big Brother.

It wasn’t too long ago that I wrote about Brian McLaren and got in trouble. Reflecting on seeing him speak at a nearby church, I suggested that he appears to love Jesus but hate God. Based on immediate and furious reaction, I quickly retracted that statement. I should not have done so. I believed it then and I believe it now. And if it was true then, how much more true is it upon the release of his latest tome A New Kind of Christianity. In this book we finally see where McLaren’s journey has taken him; it has taken him into outright, rank, unapologetic apostasy. He hates God. Period.

“It’s time for a new quest,” write McLaren, “launched by new questions, a quest across denominations around the world, a quest for new ways to believe and new ways to live and serve faithfully in the way of Jesus, a quest for a new kind of Christian faith.” McLaren frames the book around “Ten Questions That Are Transforming the Faith.” They cut to the very heart of the faith, foundational in every way. He asks:

His purpose, he insists, is not to answer the questions, but to provide responses to them. Answers indicate finality, responses indicate conversation and openness. “The responses I offer are not intended as a smash in tennis, delivered forcefully with a lot of topspin, in an effort to win the game and create a loser. Rather, they are offered as a gentle serve or lob; their primary goal is to start the interplay, to get things rolling, to invite your reply. Remember, our goal is not debate and division yielding hate or a new state, but rather questioning that leads to conversation and friendship on the new quest.” But that is mere semantics. Whether answering or responding (whether saying tomato or tomahto), what McLaren does through these ten questions is to completely rewrite the Christian faith. His “gentle lobs” rip the very heart out of the faith.

At the center of his remix of the faith is the claim that most Christians look at their faith through a flawed Platonic, Greco-Roman lens instead of through a biblical, Jewish lens. “God’s unfolding drama is not a narrative shaped by the six lines in the Greco-Roman scheme of perfection, fall, condemnation, salvation, and heavenly perfection or eternal perdition. It has a different story line entirely. It’s a story about the downside of ‘progress’–a story of human foolishness and God’s faithfulness, the human turn toward rebellion and God’s turn toward reconciliation, the human intention toward evil and God’s intention to overcome evil with good.” This Greco-Roman God, the one that most Christians believe in, is a “damnable idol … defended by many a well-meaning but misguided scholar and fire-breathing preacher.”

McLaren plays the all-too-typical “everyone else has it wrong” card. It turns out that most of us (all but a handful of enlightened intellectuals, as it happens) have been reading the Bible through the distorted lens of a Greco-Roman narrative. This narrative produced many false dualisms, an air of superiority and a false distinction between those who were “in” and those who were “out.” These three marks of false narrative have so impacted our faith that we can hardly see past them. But Brian is willing and eager to play Moses, leading us out of the Egypt of our own ignorance and into the Promised Land of the new Christianity.

It would take more time than I’d be willing to give it to offer a point-by-point explanation of what responses McLaren proposes for each of the ten questions or to document the ramifications of his new theology. He denies the Fall, he denies original sin, he denies human depravity, he denies hell. And that is just in the first few pages. Needless to say, all of this leads him to a radically unbiblical view of the cross and the purpose and work of Jesus. Though he insists that he considers the Bible “inspired” (though certainly not in a traditional sense) he also says that most Christians have read it wrong, having viewed it as a kind of constitution in which God gives Spirit-breathed, inerrant revelation of himself. “I’m recommending we read the Bible as an inspired library. This inspired library preserves, presents, and inspires an ongoing vigorous conversation with and about God, a living and vital civil argument into which we are all invited and through which God is revealed.” After all, “revelation doesn’t simply happen in statements. It happens in conversations and arguments that take place within and among communities of people who share the same essential questions across generations. Revelation accumulates in the relationships, interactions, and interplay between statements.”

What does the Bible accomplish then? What does it teach us about God? “Scripture faithfully reveals the evolution of our ancestors’ best attempts to communicate their successive best understandings of God. As human capacity grows to conceive of a higher and wiser view of God, each new vision is faithfully preserved in Scripture like fossils in layers of sediment.” The Bible is an ongoing conversation about God’s character in which humans come to progressively more accurate understandings of who he is. There is no reason to think that any of them actually had it right. His reinterpretations of Job and Romans are a sight to behold, so muddled and so fabricated that they become absolutely nonsensical. There is a deliberate ignorance at work here.

The arrogance of it all is stunning. McLaren is angrier than he has been before and more scornful. Still, though, he presents his ideas coated with the veneer of a false humility. But, handily, he builds into the book the means he will use to answer his critics. He will simply accuse his detractors of having this old Greco-Roman understanding of the faith. We poor fundamentalists cannot be among the new kind of Christian until we have been enlightened to understand the Bible through an entirely new narrative structure. Only then will this all become clear. Until then, more to be pitied are we than any men.

Here, in A New Kind of Christianity it’s as if McLaren is screaming “I hate God!” at the top of his lungs. And swarms of Christians are looking at him with admiration and saying, “See how that guy loves God?” I don’t know what McLaren could do to make the situation more clear. In fact, his book is nearly indistinguishable from many of the de-conversion narratives that are all the rage today. Compare it with Bart Ehrman’s God’s Problem and you’ll see many of the same arguments and the same misgivings; you’ll find, though, that Ehrman is at least more honest. He at least has the integrity to walk away from faith altogether rather than reinventing God in his own image.

McLaren says he would prefer atheism over belief in the God so many of us see in Scripture. Well, he is not far off. This new kind of Extreme Makeover: God Edition Christianity is no Christianity at all. It is not a faith made in the image of Jesus Christ, but a faith made in the image of a man who despises God and who is hell-bent on dragging others along with him as he becomes his own god.

As Winston turned up the light, he saw that prostitute for what she really was. Here McLaren turns up the light and we see what his faith, what his Christianity, really is. We see it in all its toothless, caked-on horror. This new kind of Christianity is simply paganism behind a thick coating of false humility and biblical language. It is an expression of rebellion against God far more than it is a pursuit of new intimacy with the Creator.

And like Orwell’s whore, many will go to this book seeking intimacy with God only to content themselves with rebellion against him. For each is satisfying in its own way.