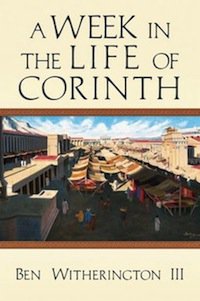 Buy from Amazon
Is Ben Witherington’s A Week in the Life of Corinth fiction or nonfiction? I suppose it’s a little bit of both. In 150 pages he takes a could-be-true look at ancient Corinth, focusing on a cast of characters that includes Paul, Priscilla, Aquila, and the lesser-known Erastos (known as Erastus in the ESV), who is mentioned in Acts, Romans and 2 Timothy.

To give you a sense of what it is all about, I doubt I can do a whole lot better than quoting the back cover:

Intrigue is in the air as Nicanor returns to Corinth and reports to his patron Erastos on recent business dealings in Rome. Nicanor, a former slave, is a man on the make. But surprises keep springing up in his path. A political rival of Erastos is laying a plot, and a new religion from the east keeps pressing in on his life.

Spend an imaginary week in Paul’s Corinth as the story of Nicanor winds through street and forum, marketplace and baths, taking us into shop, villa and apartment, where we meet friends new and old. From our observing a dinner in the temple of Aesclepius to Christian worship in the home of Erastos, Paul’s dealings with the Corinthians in his letters take on focused relevance and social clarity.

The story is interspersed with helpful little sidebars–most of which contain photographs–providing the kind of context that cannot be explained within the story itself. These sidebars range from explanations of political figures to coinage to medicine to social conventions.

Witherington’s regular context is academia–he has written an extensive list of commentaries and scholarly works with titles like Letters and Homilies for Hellenized Christians: A Socio-Rhetorical Commentary on Titus, 1-2 Timothy And 1-3 John–so fiction is a little bit off the beaten path for him. While this work is not going to add a Pulitzer to his list of achievements, neither is it meant to. The plot simply gives enough intrigue to carry the characters along for one week and thus provide an interesting setting for this little glimpse of history culled from a lifetime of biblical studies. I found it particularly helpful to see Paul’s teaching in context, whether he is leading the Lord’s Supper or reciting a letter to the church in Thessalonica. Similarly, it is helpful to see the early church worshiping in a home and Greeks wrestling through the implications of converting to a strange, new religion centered around a resurrected Jewish carpenter. In this story Witherington brings us a little bit closer to a culture that is increasingly foreign.

While Witherington teaches more history than theology, he does get into one difficult and controversial area of doctrine when he discusses the role of prophecy in the early church and suggests that there is no reason to believe that such prophecy ever came to an end.

All-in-all, A Week in the Life of Corinth is quite a useful little volume. It can be read in just a sitting or two and makes a welcome break from the traditional texts that are far more dense and difficult.