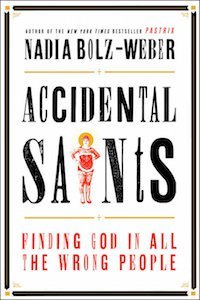 I read it because it was on the New York Times list of bestsellers. That is not only a significant accomplishment for an author but an indication that her work resonates with a wide audience. So I read the book. And, oh my.

Nadia Bolz-Weber is founding pastor of a Lutheran congregation in Denver called House for All Sinners and Saints. Accidental Saints: Finding God in All the Wrong People is the follow-up to her memoir, Pastrix, also a bestseller. A tremendously gifted writer, Bolz-Weber is known for her storytelling, transparency, irreverence, and excessive profanity. In this new book she describes some of her encounters with grace and she does so largely by sharing anecdotes related to her pastoral and speaking ministries.

For the purposes of this review, let’s leave aside the issue of whether the Bible permits a woman to serve as a pastor—something that has long been a matter of debate among Christians. We can leave it aside for now because whether or not the Bible reserves the office of pastor for men, it undoubtedly reserves it for those who meet certain qualifications—qualifications that are laid out in the New Testament. Here is an example: “The saying is trustworthy: If anyone aspires to the office of overseer [synonymous with “elder” or “pastor”], he desires a noble task. Therefore an overseer must be…” (1 Timothy 3:1-2). What follows is a list of character traits (above reproach, respectable, hospitable, and so on). We find these lists in 1 Timothy, in Titus, and in 1 Peter, and when we put them together we have a description of the kind of person God calls to the pastorate. He makes it clear: The office of pastor is reserved for those who are qualified by their character.

Let me say it candidly: Bolz-Weber has no business being a pastor and, therefore, no business writing as a pastor. She proves this on nearly every page of her book. Time and again she shows that she is woefully lacking in godly character. Her stories, her word choice, her interactions with her parishioners, her temper, her endlessly foul mouth, her novel interpretations of Scripture—they lead to the alarming and disturbing picture of a person who does not take the office seriously enough to ask if she is qualified to it. 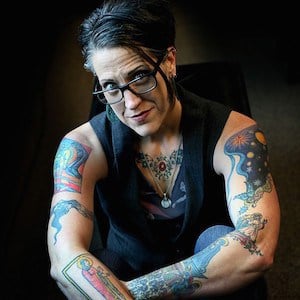 Allow me the indulgence of a metaphor. In the book, and in the Q&A that follows it, Bolz-Weber refers to her obsession with CrossFit. Now let’s suppose that she pursues professional training in preparation for her next competition. And let’s say that she is introduced to a trainer who is a couple hundred pounds overweight and emerges wheezing from his office with hands coated in Cheetos residue. She would have every reason to doubt his suitability to the task and to request a different trainer. Why would she trust him to teach what he does not live?

And yet she boldly tells others how to live as Christians even while she is so obviously and braggingly deficient in godly character. See, somehow she equates transparency with suitability, as if her abundance of flaws, foibles, and outright sin serve as a résumé, as if they are evidence of godliness. But, biblically, nothing could be farther from the truth. This kind of transparency may masquerade as humility but is actually the very height of pride. She revels in the things God forbids and makes little of an office God holds sacred.

Of course, her disregard for the office of pastor should probably not be a great surprise since the religion she describes bears little resemblance to Christianity, at least as the Bible describes it. And this, I suppose, is her point: She wants to recreate the Christian faith and make it palatable to the twenty-first-century culture. To do this she uses the Bible when and how it suits her, but without any consistency. She casts doubt on the miraculous and supernatural. She affirms homosexuality and transgenderism. She teaches a form of universalism. She outright denies all kinds of central Christian doctrines including, of course, Christ’s substitutionary sacrifice (which she mocks like this: “God gathers up all our sin, all our broken-ass junk, into God’s own self and transforms all that death into life. Jesus takes our crap and exchanges it for his blessedness.”). What remains in the end has only the barest, weakest, blandest hint of Christianity left.

As I finished the book I realized that I have read it before—or others just like it, at least. This is yet another in a long line of books meant to appeal to those who want to bear the name of Christ but without becoming like Christ. It’s not that Bolz-Weber doesn’t have any interesting or even helpful insights into life, into sin, and into human nature. It’s just that her brand of Christianity confuses worldliness and godliness. No wonder, then, that the eager masses are lapping it up. Her God calls us to himself but then leaves us to be whoever and whatever we want to be.

In my assessment, Bolz-Weber is outrageous for the sake of being outrageous and that makes for the worst kind of book. Consider this anecdote: “I dug out a scarf from my bag and made a remark about the ****ing air conditioning as we listened to the prelude for the service to follow, and by ‘listened to,’ I mean made fun of. ‘Bruce, is this prelude helping us or hurting us, you think?’ There is something about dropping F-bombs and making fun of worship music with a bishop that makes me feel warm and fuzzy.” Her schtick is not cool. It’s not funny. It’s not shocking or edgy. It’s stupid, it’s bland, it’s old, it’s boring, it has already been tried and found wanting.