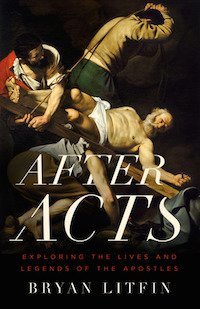 The story of the early church is the story of God working in incredible ways through a group of people known as his apostles. These are the people he had specially chosen and called to serve as his emissaries, to take the good news of the gospel of Jesus Christ all through the known world. Again and again we read about these apostles in the book of Acts and in the various epistles, but what happened to all of those characters once the book of Acts was complete and the biblical canon was closed? This is the question Brian Litfin means to answer in his new book After Acts: Exploring the Lives and Legends of the Apostles.

What a great idea for a book! Church history is packed full of accounts of the lives and deaths of the apostles, but a shocking number of these accounts are obviously fictional and legendary. Is there a way to cut through the noise and to construct a realistic history of the major biblical characters? Litfin believes that it many cases it is possible to at least weight the evidence and to come to reasonable conclusions.

Litfin dedicates a chapter each to Matthew, Mark, Luke, John, Mary, Thomas, James, Peter, and Paul. Mary makes the list not because she was an apostle but because of her unexpected importance in church history, and especially in Roman Catholic history. Other than her own son, there are more legends about Mary than about any other character! In every case Litfin describes the commonly accepted view of what happened to the character after Acts, what he accomplished, and where he died. Then he looks at all the available evidence to show what appears to be based on fact and what is far more likely to be based on legend. And in most cases his conclusions are quite compelling. At the end of each chapter he puts together a report card to assign grades to the commonly-accepted facts. So, for example, when it comes to Luke he assigns the following grades:

It makes for quite an interesting and effective format.

Now before I conclude, I need to own my ignorance when it comes to early church history and even to the means by which historians weight the evidence before them. This is a highly specialized field and one that is far beyond my area of expertise. That said, I found Litfin’s methodology compelling. He is obviously and unashamedly Evangelical in his approach to the Bible and the Christian faith, but still always does his due diligence. When he looks at Liberal claims about the authorship of books, he never mocks, but always grants them the dignity of examining their position. Not only that, but he is also honest. Sometimes we believe a certain man authored a book or that a particular event took place, but the evidence may be more circumstantial than we would like.

It seems noteworthy that Litfin believes in the infamous “Q” source document for the gospels. However, he does so in such a way as to still affirm the inerrancy and infallibility of any of those books that may have used it as one of their sources. I am not well-enough versed to comment too much on the implications, but his view seems similar to CARM’s view: “If Q is an actual source, it does not invalidate the validity of the Gospels. … If anything, the existence of Q would mean that the time between the actual events and their written record is lessened.”

After Acts is written to be fast-paced and reader-friendly, and Litfin has succeeded well. I found it an engaging and enjoyable book that served to strengthen my confidence in the authority and the truthfulness of the Bible.