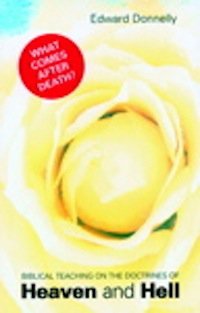 Buy from Amazon
Some books receive titles that are a little bit mysterious, only hinting at what the book contains. There are others that just give it all away in the title. Biblical Teaching on the Doctrines of Heaven and Hell pretty well says it all. Edward Donnelly simply turns to Scripture to see what God says about these important doctrines of heaven and hell.

Heaven is a popular subject at the moment. Randy Alcorn’s book Heaven has over 300,000 copies in print and there are another 200,000 Heaven-related products in print with it. I’m quite sure that he would have sold fewer than 3,000 had the book been titled Hell. Don Piper’s 90 Minutes in Heaven has sold millions of copies and has been on the New York Times list of bestsellers for months now. For obvious reasons, hell is a less popular topic. Bill Wiese’s 23 Minutes in Hell has barely made a splash. We would far rather ponder heaven than hell. And for good reason. But in this book Donnelly dedicates equal time to both subjects.

The first half of the book discusses hell in all its fiery horror; the second part turns to heaven with all its beautiful glory. The first half is difficult to read and weighs heavily on the soul; the second is like a sip of cool water on a hot day. The first terrifies; the second elevates. Donnelly is not given to hyperbole or imagination. He does not present a fictionalized vision of hell that owes more to horror movies or medieval art and imaginings than to the Bible. Rather, he simply relates what the Bible tells us, both explicitly and implicitly, about that awful place. He does so under four alliterated headings: Absolute Poverty, Agonizing Pain, Angry Presence and Appalling Prospect. When, in the second half of the book he turns to heaven, he does not guess what it is like or fall into conjecture about what we will experience there. Instead he relates only what the Bible tells us, reflecting on the fullness of joy that is there and waiting for those who love the Lord.

Though only a short book, weighing in at just 127 pages, Biblical Teaching on the Doctrines of Heaven and Hell still seems to be thorough. This is, I believe, because though the subjects of heaven and hell are mentioned often in the Bible, we do not receive a great deal of detail about them. They are so far beyond our experience that God can only give us glimpses of what they will be like by drawing comparisons to what we know and experience in this life. This is a book that dedicates equal time to both subjects, first allowing the heart and spirit to recoil at the though of hell but then comforting it with the knowledge of heaven. Throughout the book Donnelly is pastoral, often challenging the reader and continually returning to the gospel, ensuring the reader knows that the promises of heaven are given only to those who know the Lord and that the horrors of hell can be avoided by those who will turn to Him. For those interested in doing some reading on the subject matter, this book is a worthwhile investment in both time and money. I recommend it.