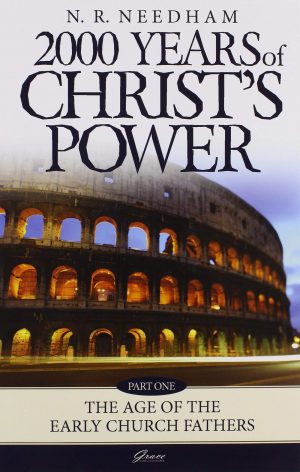 I could draw up quite a list of reasons why Christians need to study and understand the history of the church. We should study the history of the church so we can understand the development of doctrine and realize that a doctrine like the Trinity was not simply understood by a brief reading of Scripture, but was a doctrine forged in the fire of counsels, battles and excommunications. We should study the history of the church because, as the old adage states, those who cannot learn from history are doomed to repeat it. But I think the most important reason to study church history is to see and appreciate the mighty acts of God in preserving His people through the past two millenia of strife and persecution.

Nick Needham, who pastors a church in London has attempted to carry this theme throughout a series of books on the history of the church. 2000 Years of Christ’s Power is a four-volume series with the first three volumes already published and the fourth due for publication in the near future. The first volume discusses the age of the early church fathers, the second discusses the middle ages, the third discusses the renaisscance and reformation with the final, forthcoming volume bringing the history of the church to the present day.

While the study of church history can easily become laborious, this series is intended to appeal “to the non-specialist and any modern Christian will find it challenging and stimulating to be introduced to men and women who loved and served the same Saviour that he loves and serves.” Of course those who have already studied the history of the church will still find plenty of deep and interesting content.

So how well does Needham succeed in his goal? Having now read the first volume I found he did an excellent job of making a complicated era of the church’s history both interesting and understandable. This is surely no small task! The book is written in an appealing fashion and clearly targetted at people with little prior knowledge of the subject. The format is primarily chronological and each chapter concludes with a section of primary sources where the author provides short readings from the works of the historical figures just discussed. Words and concepts are well-defined and the book includes a helpful glossary. All of these factors work to make this a very accessible volume that will benefit any adult or teenager.

I do have a few small concerns with the book. It was clear to me that the author was generally attempting to describe history without interpreting it or commenting on it. Having said that, I would have found it helpful to have him expend some effort in comparing the development of doctrine in this age with Protestant doctrine as we know it today. While at times it was clear to see how theology began to drift away from biblical orthodoxy, at other times it was more difficult to understand how the failings of the early church fathers contributed to much of the incorrect doctrine that flourished at least until the time of the Reformation and in many cases continues to flourish in our day. It would also have been helpful if the author had defined the word “great” which he uses quite regularly. I was unsure if he used the word to describe a person’s contribution to the history of the church or if he used it in a more subjective sense to indicate his agreement with that person’s contributions. Finally, at times it seemed to me that the author was endorsing some of the figures who seemed to have drifted far from orthodoxy and even far from the gospel. This was especially true as time progressed and more of those who considered themselves Christians drifted farther from the foundations laid by the Lord and His apostles.

Those concerns aside, this book gave me a deeper understanding of the early history of church and helped me understand the graciousness of God in continuing to preserve and strengthen the church. It helped me understand the historical foundations for many of the doctrines that we too-often take for granted today. I have no trouble recommending it and I look forward to reading the subsequent volumes.