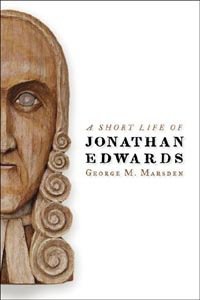 Several years after the publication of his full-length, award winning book, Marsden has written A Short Life of Jonathan Edwards. He explains the book’s existence in this way: “Prior to being asked to write that major biography, I had already told my friends at Eerdmans that some day I would write a life of Edwards for them. So with the cooperation of both publishers, I agreed that after I wrote the more definitive biography for Yale, I would write something shorter for Eerdmans. The happy outcome is that, having already published a much longer, closely documented work, this book could be kept brief without any scholarly apparatus.” Thus this book, written for a wider audience, comes unencumbered by footnotes, citations and references. It is not an abridgment of the previous work but is “a fresh retelling in which I have tried to include just what is most essential and most engaging.” Throughout, Marsden compares Edwards with none other than Benjamin Franklin. And, indeed, their lives do run in near parallel for some time. Though there are obvious differences between the two, there are also remarkable similarities.

I suppose it may be polite to offer a “spoiler alert” here, but I’m assuming most people know that Edwards is going to die at the end of the biography. That is, after all, the way most biographies end. In a section headed with “An Interrupted Life,” Marsden offers a beautifully-written look at Edwards’ final days and the almost inexplicable fact that God took him while he still had so much to accomplish. “In Princeton Edwards moved in with Esther and his two young grandchildren, Sally and Aaron Jr., in the attractive president’s home (still standing near the original Nassau Hall in Princeton’s campus). He preached a few times in the college chapel, set a few lessons for students, and was officially installed as president in mid-February. That was all.” That was all, for smallpox was spreading through the region and Edwards made the fateful decision to be inoculated against it. He subsequently contracted a secondary infection and succumbed to the disease in March of 1758. He was just fifty-four years old. Marsden writes “Almost all his life he had been preparing for this moment. He had often preached to others about how they should be ready for death and righteous judgment at any minute, and he had disciplined himself with a regimen of devotion so that he would be prepared. In the weeks when he was wasting away he must have wondered why God would take him when he had so much to do. But submission to the mysteries of God’s love beyond human understanding was at the heart of his theology.”

As he reflects on the life of his hero, Marsden pauses to ask some interesting “what if” questions regarding the timing of Edwards’ death. What if he had lived long enough to see the American Revolution? What if he had, as Franklin did, lived all the way to 1790? Would he have let go of his British loyalties and sided with the revolutionaries? Probably he would have. Would the growing understanding of America’s enslavement to the king open Edwards’ eyes to the evils of slavery? Had Edwards lived to the days of the Revolution, would he be remembered more widely? Might he have scrawled his signature the Declaration of Independence?

The book’s final chapter is a masterpiece of reflection, asking simply “What should we learn from Edwards?” Here Marsden lays out some of the most important lessons from the life of this great theologian, a towering figure in early American history.

While A Short Life of Jonathan Edwards is in no way a replacement for Marsden’s more substantial biography, it is a wonderful supplement to it (or to Murray’s volume if you prefer). Though there is obvious and unavoidable overlap between the books, each has different emphases and each has its own strengths. I’d suggest that the best way to reconcile these is to read and enjoy both volumes. This little biography is a must-have addition to any library.Other Edwards-related books that may interest you: