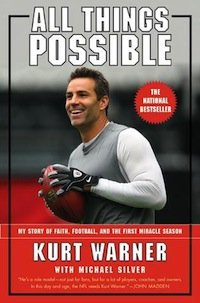 All Things Possible is the autobiography of football star Kurt Warner. Though in the media his story is often related as a meteoric rise to stardom, we learn that it was only through time, perseverance and God’s grace that Warner ever got a chance to live out his dream.

I was drawn to Kurt Warner’s story for several reasons. First, I am a fan of the St Louis Rams, the team with which Warner has had his success. Second, I love stories about underdogs, and Warner’s story is just that. Third, I love to read about other Christians and the experiences that shaped them.

Kurt Warner was an underdog and no stranger to rejection. For years he faced rejection as he tried to live out his dream of playing professional football. He was turned down by the major colleges, eventually ending up at the University of Northern Iowa where he spent three years being a backup and only one year leading the team. When he graduated he went undrafted in the NFL entry draft and was passed up by every professional league. This went on for several years until finally he accepted a position as quarterback in the lowly Arena League. After two seasons of leading the Iowa Barnstormers, he was given a chance to play in NFL Europe and finally, at the age of twenty seven, was picked up by the St Louis Rams. He spent his first season in the big leagues as a third string quarterback and saw action in only one game. By the 1999 season he had moved up to the position of backup quarterback, and after an injury to the primary quarterback, found himself right where he wanted to be. He was untested, unproven and no one believed he would make an impact.

Who could have foreseen the season Warner would have? Warner’s 1999 season was one of the most successful seasons ever for a quarterback and the most successful for the Rams as Warner led the team to a Superbowl victory while picking up the league’s Most Valuable Player award.

Kurt Warner is a Christian and credits his faith for his success. He never misses an opportunity to tell others about his faith and is probably the most vocal Christian professional athlete.

Though I enjoyed the story, I found the book poorly written. It used many colloquialisms and it is not unusual to read sentences such as, “They were like, ‘Yeah right.’” He also speaks about being “totally bummed out.” Warner also comes across as a tad pretentious and proud. I believe he is a humble man who is well aware of Who is responsible for his success, but does not always convey that as accurately as he might like.

All-in-all this is an enjoyable book and represents what is hopefully only the first chapter of Warner’s career. He is a man who has faced countless hardships and has persevered in faith. If sports figures are to be role models in our society, I am glad that there are men like Warner who proudly proclaim their faith.

Note. The book ends at the end of the 1999 season. The next season Warner was very good, but missed several games due to injuries. In 2001 he again led his team to the Superbowl but lost the big game when New England scored a last-second field goal. In 2002 he missed more than half the season to injuries and looked very bad when he was playing. In 2003 he won the starter’s job, but played terribly and was benched after the first game. It is expected that 2004 will find him on a new team where he will have the change to be a starter once again.