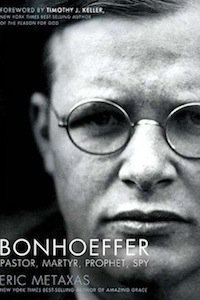 Buy from Amazon Buy from WTS Bookstore
It was several years ago now that I began meeting regularly with a few Christian guys who live in this area. We would read through good books and then get together once a week to discuss them. Every Friday morning at 6(!) AM, we would meet in a local coffee shop and spend time dissecting and digesting classic books. It was in this effort, in this precursor to Reading Classics Together, that I first encountered Dietrich Bonhoeffer. The Cost of Discipleship was the second book we read together, moving through it week by week, chapter by chapter. Like so many people before and since, I was introduced to the man by what most people consider his greatest work.

Bonhoeffer is the subject of an extensive new biography by Eric Metaxas who is probably best-known for his biography of William Wilberforce (read my review) which was the official biography that accompanied the 2006 film by the same name. Interestingly, this is one of two lengthy biographies of Bonhoeffer to be published this year (the other, Dietrich Bonhoeffer 1906-1945: Martyr, Thinker, Man of Resistance by Ferdinand Schlingensiepen is due to hit store shelves in a couple of weeks). Metaxas sets the bar high with his Bonhoeffer: Pastor, Martyr, Prophet Spy. While it may not be one of the top three or four biographies you will ever read, it is nevertheless a very solid effort and with much to commend it. It’s entirely possible that if I went ahead and ranked my ten favorite biographies this would be somewhere on that list.

I find Bonhoeffer a fascinating figure. There may be some bias toward him because of my fascination with the period of history in which he lived and, even more so, the period of history in which he died. Though he had quite a lengthy ministry before the outbreak of the Second World War, it was during that great conflict that he came into his own, that he made his mark on history. It was during the war that he showed that he was willing to endure hardship and even death for the sake of what he believed. While I am not quite sure that he qualifies for the label of “martyr” (since he was killed more for his political decisions than for his religious beliefs, though I’ll grant that his faith informed his politics) he was still an inspiring figure who preached the gospel fearlessly and unashamedly even in his nation’s darkest hour.

There are a few things about Bonhoeffer that stood out to me as I read this account of his life.

I was struck that, though Bonhoeffer’s theology was sometimes a little bit suspect, and at times slightly exaggerated, it seems clear that he was the right man at the right time. Metaxas does a very good job of explaining the cultural and religious context in which Bonhoeffer grew up and in which he ministered. With such a background it was almost inevitable that some of his beliefs would seem strange to us; and yet it’s difficult to see how he could have arrived at any other beliefs. He was a product of his time, of his culture, of his church. There are some who can see only what Bonhoeffer got wrong, but such people are not being fair to all of this context. From all I could see in this book, Bonhoeffer knew and treasured the gospel. And what’s more, he shared it unapologetically at a time when to do so was to put oneself at odds with the nation, its church and its government.

I saw as well how seriously Bonhoeffer took life, how he was radically sold out to his Savior. He loved the Lord deeply and honored him in all of life. Like so many great Christians, he was fully committed to honoring God in a holistic way. He had a deeply personal faith, one that led him to commit to extensive periods of personal Bible study, meditation and prayer. But he also had a public faith, one that delighted in and was committed to Christian community. I cannot think of many great Christians who have not been wholehearted in their devotion.

And I saw what a pastor’s heart Bonhoeffer had. Even in his last days he was acting as a pastor, teaching others and preaching the gospel. In his last moments, when he could do nothing else, he preached the gospel through his silent submission to the Father’s will, going to the gallows without struggle and without bitterness. He knew that he was going to be with the Lord and that is exactly where he wanted to be. As he left his friends, taken away by the Gestapo he said to them, “This is the end. For me the beginning of life.”

The only real negatives I would offer about this life of Bonhoeffer (and even then with some hesitation) are these: that author sometimes uses colloquial expressions that seem oddly out of place in a formal biography; and that the author occasionally relies on extensive quotations where it seems that a summary quote might suffice better. At the same time, and in his defense, this is not a biography where the reader is forced to learn about the subject only or primarily through those long quotes. Bonhoeffer’s books and letters figure prominently, of course, but they do not form the substance of the book. And it’s better this way, I’m sure.

I’ve often said that there are two kinds of biographies: those where you feel like you’ve learned about the subject and those where you feel like you’ve actually met the subject. It is the latter that are the great biographies and Bonhoeffer is among that number. As you finish this biography you will know the events of Bonhoeffer’s life; but even better, you’ll feel like you’ve come face-to-face with the man himself. That is the mark of a good biography and about the highest praise I think I can offer. This is truly a good biography and one you’ll benefit from reading. And I suggest you do just that; it may just be the best biography you read this year.